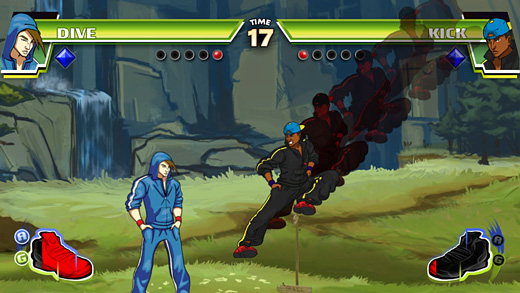 HIGH It's a funny idea.

I have to admit, I feel at a bit of a loss when it comes to writing a review of Divekick. After all, what's the protocol for reviewing something that's essentially a clever joke that somehow found itself turned into a $10 title?

Although it's structured as a standard fighting game, Divekick reduces the formula down to its absolute core—players push one button to jump and the other to kick, and there's not much else to it except learning the limited special attacks and the differences between characters. Each one moves slightly differently, and has their own angle of attack. Some jump higher, some glide further when descending, and so on. It's not complicated.

Honestly, Divekick seems like the sort of thing that would be most appropriate as a free download somewhere, digested as a arch commentary on the nature of fighting games, and then quickly forgotten. However, the developers have expanded on the concept and included a story mode and online play, just like any other legitimate fighter. When taken in this context, it just doesn't hold up.

When playing the game solo in Story mode, I got tired of it before I had even finished it once. The artwork isn't eye-catching or memorable, and the character designs are quite bland. I can only assume that many of the fighters are either based on real people or are some sort of in-jokes inspired by the competitive fighting game scene, but most of the references were lost on me.

When taking the game online, I spent quite a bit of time in both Ranked and Unranked lobbies waiting for a match, and rarely found anyone to play against. When I did, it was usually someone spamming the buttons to build up their special meter and then cheesing their special moves—not my idea of a great time. The game also offers co-op on the Vita, with each player taking one side of the unit. I appreciate the addition and laughed a bit at how unorthodox it was, but it didn't change my appreciation for the game itself.

Technically, it was irritating to find that the game's two-button concept also applied to menu navigation in spite of having a full array of buttons, sticks and a d-pad available on the Vita. I'm sure that someone thought it was quite clever, but in practice it's just an awkward annoyance. I also noticed that it was impossible to back out of the character select menu, and changing the number of rounds in the Options menu didn't apply the changes to the Story mode.

I'm all for interesting choices and humor when making a game, but the appeal of a one-trick pony like Divekick wore off after just a few minutes. Like, five. Perhaps people steeped in the fighting game scene or those with friends (and beer) nearby might get more out of it than I did, but I can't imagine that many players will find value in this drawn-out gag. Rating: 3.5 out of 10.

Parents: According to the ESRB, this game contains violence, suggestive themes, and use of alcohol and tobacco. The violence in the game is quite cartoonish, consisting only of jump kicks and a couple special moves. It's not graphic or intense in any way, and there weren't any memorable examples of the other warnings mentioned.

Deaf & Hard of Hearing: You won't have any problems here. Although there are no subtitles for the voice samples during game play, they're not essential to success and only add flavor. After playing a few rounds with the sound off, I decided to leave it off and had no issues.