HIGH Seeing numerous callbacks to Disney films in each level.

LOW Not having my oldest son around to play co-op with me.

WTF The costumes really don't have any unique abilities?

When I received a copy of Disney Universe

at the GameCritics West offices, I didn't know what to make of it. Clearly it was kid-oriented, but I had never even heard of the title. Reading the bulletpoints on the back of the box, there was much said about the number of character-themed costumes and teaming up, but no clear information about how it played, or even what genre it was.

Once I put it in my PlayStation 3, all became clear… simply put, Disney Universe is the Mouse House version of the various Lego games (Star Wars, Batman, etc.) minus the plastic bricks, of course.

Offering a younger-skewing play experience for up to four people, Disney Universe sticks very closely to the formula that obviously inspired it: the player chooses from several costumes (Donald Duck, Cheshire Cat, Princess Jasmine, and so on) and then tears through a world filled with simple obstacles that are removed or crossed by solving simple puzzles. Each character has a club to attack with using simple combos, and everything that gets bashed drops tons of Mickey-shaped money.

Repeat play of the game is encouraged by asking players to purchase additional areas past the first one (Pirates of the Caribbean is the freebie) and each costume apart from the starting offerings must be bought as well. To be clear, these purchases do not require actual cash; they are unlocked with the in-game money earned through gameplay. It's also stated up front that certain costumes can only be unlocked by completing each level twice, so the developers aren't shy about wanting children to give this title much more than a one-and-done.

I have to admit, with my son (the target demographic) not around to play the game with me, it was a challenge to put myself in his shoes and try to gauge whether or not the game would be enjoyable. Since we had played several of the Lego titles previously, I felt fairly confident that he would have been engaged in Disney Universe, although I can't say that for sure. For me, personally, I found it to be simplistic, repetitive and mind-numbing after just a few short levels. I was especially surprised that the costumes are strictly cosmetic, offering no special abilities at all. (No hog-charge for Pumbaa? Really?) 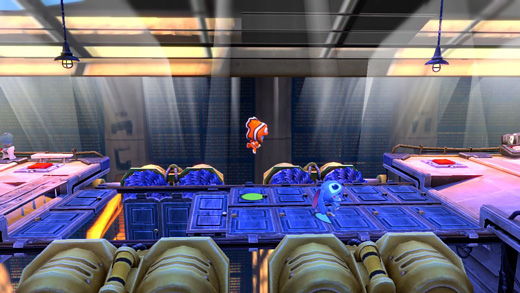 However, as I stated earlier, I'm well aware that I am not the target audience. If I ever sat down in a restaurant with nothing on the menu except for chicken nuggets, grilled cheese sandwiches and PB&J, I'd immediately walk out and go elsewhere. That said, such a restaurant would likely be my son's favorite place to eat, and as a parent, I'm aware and accepting of that.

In terms of production, Disney Universe is a pretty slick affair. Menus are easy to navigate, the music is peppy, and every aspect feels manicured and polished. It certainly seems as though a fair amount of resources were dedicated towards making the game as appealing as possible. The graphics in particular are quite lush, and many of the levels offer clever callbacks to the films from which they are inspired. In the Wonderland world, many keys are in the shape of the White Rabbit's pocket watch, and they advance time back and forth. In Aladdin's world, it's common to see jewel-encrusted scarabs activating a bridge of magic carpets, and such. These elements don't really have much effect on gameplay itself, but the attention to detail was appreciated.

On the other hand, there are some minor technical issues that put a damper on the experience—ironically, issues quite similar to those in the Lego titles.

For example, it's sometimes difficult to gauge depth when trying to make jumps, and a lack of camera control compounds the issue. Getting on and off vehicles or ladders is sometimes problematic, with the object in question not quite being "sticky" enough. There were also a few times when I died and my character respawned in a place that continuously re-killed them; on top of a bed of spikes, for example. Without another player to remove the fatal element, the only choice was to restart the level. None of these issues are game-breakers, though. Players can respawn as many times as necessary, and restarting a level isn't much of a problem since they're all fairly short.

While I played a bit with my wife (players "compete" to see who performs best in each level) I can't honestly say that it made the game more enjoyable for either one of us. That said we are grown-ups, and sophisticated game players, to boot. The simple fact is that Disney Universe

has been crafted for smaller hands, and that's all there is to it.

While I would not recommend the title to older gamers (unless they were fanatical Disney fans) I strongly suspect that playing as a parent/child team would be of value, and having multiple children playing together would certainly be the optimal situation. If nothing else, I would certainly offer it to my kids without hesitation, and that's not something I can say for every game aimed at the little ones. Rating: 7.0 out of 10 on the kiddie scale.

Disclosures: This game was obtained via publisher and reviewed on the PS3. Approximately 5 hours of play were devoted to the single-player mode, and the game was not completed. 1 hour of play was spent in multiplayer modes. (Note: Online is local only. There are no online multiplayer modes.)

Parents: According to the ESRB, this game contains cartoon violence and crude humor. Frankly, this game is about as harmless as they come. There is no salty language, no sexual content whatsoever, and the "violence" is depicted as the player whacking cartoonish enemies with a bat—it's not graphic in the least. I can't imagine any parent objecting to anything in this game.

Deaf & Hard of Hearing: All dialogue is accompanied by subtitles, and there are no significant auditory cues to gameplay. I found the game to be totally accessible both with or without sound.