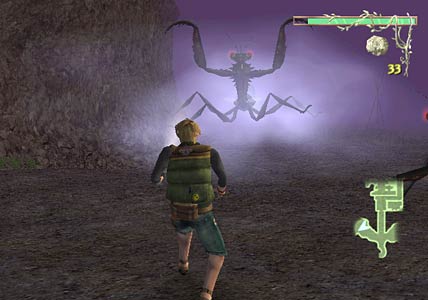 After trying Escape from Bug Island, my jaw dropped. it's so atrociously bad, I can't believe they even bothered to publish it. I gave it a whirl just to see if it was as terrible as most people said it was, and it is.

The graphics are complete crap, definitely on par with the Dreamcast.

The controls are absurdly complicated, and I very nearly couldn't finish the tutorial because the game wouldn't recognize a “strong” combo even though I was whipping the remote around like a maniac. Granted, I'm no bodybuilder, but that was a little bit ridiculous… and who likes to play games by throwing their shoulder joint out of whack?

The core game itself is a piss-poor survival horror effort that looks like it predates the original Resident Evil. The first levels consist of wandering around in a forest, discovering that my character is unable to hop up a 2 foot ledge, and then fiddling with old-school “tank” controls while being chased by a giant mantis and flailing the nunchuk to dodge.

If I was Nintendo, I wouldn't have approved this game for release. Bug Island actually damages Nintendo by not only reinforcing the idea that the Wii is horribly underpowered, but also by reducing the wiimote to nothing but a useless gimmick. Wasn't the concept to improve control, not destroy it?

I was going to do a full review, but I can't stomach playing this piece of junk long enough to do it justice. This is by far the worst game I've played for the Wii, and it very well may be the worst game of 2007.