Once more, with Feeling 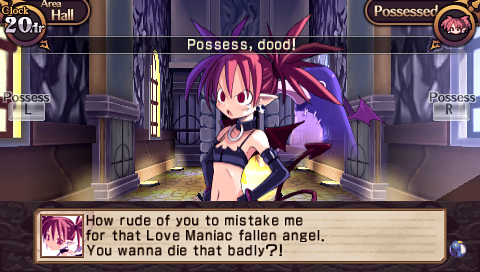 LOW Watching and re-watching the same scenes looking for the hotspot.

WTF "Your big boobs are giving me a headache."

When the original Disgaea came out of nowhere in 2003 and made the huge splash that it did, it instantly garnered a legion of fans—and for good reason. While the strategy role-playing game (RPG) gameplay was deeper and more complex than nearly anything else out there, I suspect the real source of its presence was the writing, voicework, and cast of insanely memorable characters. Anyone who's spent time with the title will swear to the numerous laugh out loud moments and quotable lines.

Nippon Ichi has turned out two sequels to that landmark title, each with less impact than the last. This time around, the developers have gone in a completely different direction and focused not on the item worlds, Geo panels or stackable attacks Disgaea has employed, and instead turned out a graphic adventure that's 99% dialogue. It's certainly a novel approach that would seem to play to one of the series's strengths, but the result is surprisingly flat.

While the story itself is convoluted and wouldn't make a whole lot of sense if I tried to explain it in detail, the basic premise is that the Lord of the Underworld is "assassinated" by eating an exploding pudding cup. It's up to one penguin-like Prinny to save the Lord by traveling back in time and re-living the day over and over until he's able to unravel the chain of events leading to the deadly dairy going boom. After the game explains this Groundhog Day ­ concept, it's also revealed that the player has the ability to "possess" characters that make appearances, and influence their decisions in order to change events in the timeline.

I'm actually a fan of graphic adventures and something like this should ostensibly be right up my alley. However, I do have to admit that even with the stellar cast, great vocals, cute art style, and everything else Disgaea Infinite has going for it, it left me fairly cold.

The biggest problem is that while the characters are still just as great as they ever were and there are plenty of truly hilarious moments, the gags are only funny once—maybe twice. Unfortunately, the game is very obtuse about which events influence what outcomes and too much of the game seems to rely on sheer trial and error. Despite having a very good idea about who I wanted to talk to and what I wanted to accomplish, it often felt as though I were fighting against the system trying to make those things happen. As a result, I had to play and replay the same scenes a large number of times before I was able to see more than one or two of the fourteen endings, and by that time most of the charm had worn away.

To be fair, the developers do include a timeline spreadsheet which marks certain events and points at which choices need to be made, but it was never all that helpful to me. Certain paths through the game would not open until other paths had been seen, and hearing the same bits of dialogue over and over and over again lost its appeal nearly instantly. It's certainly possible to skip through the story, but in doing so it becomes easy to miss branching paths, and missing those paths mean you need to watch the same bits again. It's a vicious cycle, and with so little of the game under the player's control, it all starts to feel like a repetitive waste of time with too little payoff.

Although I can genuinely say that I have great affection for the Disgaea characters and I had a blast going through the game once, the drive to unlock every ending evaporated almost immediately. Watching a game made of cut-scenes isn't bad if they make you laugh and bring a smile to your face, but watching the same scenes over and over and over and over and over because you can't figure out how to get to the new ones isn't an appealing proposition. Once a player knows exactly what to do, it's possible to go from beginning to end in relatively short order, but actually gaining that knowledge is a completely different kettle of fish. Rating: 5.0 out of 10.

Disclosures: This game was obtained via publisher and reviewed on the PSP. Approximately 4 hours of play were devoted to the single-player mode, and the game was completed. There are no multiplayer modes.

Parents: According to the ESRB, this game contains mild fantasy violence, mild violence, and suggestive themes. Although there's nothing outrageous on display here, the fact remains that this title is aimed at players of teen age or up. There's plenty of sexual innuendo and other things that may not be blatantly harmful, but a parent probably wouldn't want to have children exposed to this type of content. (Besides, young ones won't have a clue as to how to navigate through the game, anyway. Steer them clear!)

Deaf & Hard of Hearing: You shouldn't have any problems. All dialogue is subtitled, and since the game is basically a methodical text adventure, there are no important audio cues. I found no accessibility issues here.