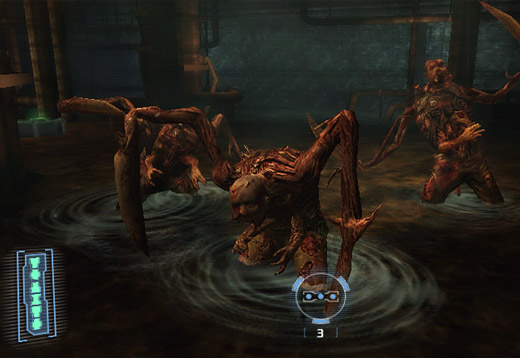 I was pretty tempted to jump back into Final Fantasy XII and log a few more hours towards completion, but I've got things to review coming up and I don't want to have to stop after a day or two.

Instead, I'm opting for something a little shorter… currently on hand, I have Silent Hill: Shattered Memories (PS2) and Dead Space: Extraction (Wii). I haven't started Shattered Memories yet, but I'm a few levels into Extraction and I have to say that the praise people were giving it seems warranted.

This time around, there's much greater emphasis on the characters and storytelling than there ever was in Dead Space, and it's appreciated. I'm no fan of the silent protagonist approach, and I think most people would agree that the story was one of the source material's weakest aspects.

Although the player doesn't control much of what happens on screen besides the shooting, Extraction does a great job of capturing a "survivors trying to escape" feel. Part of it is the surprising amount of really-decent dialogue that occurs, and another element is that the developers really put a lot of effort into designing the levels and how the player's character (via first-person viewpoint) actually feels as though he is present in the environment along with the rest of the cast. It's a very conscientious approach, and more rail shooters should copy it.

A quick shout-out to new site, 8Bit Horse. Although they're just getting started, it looks great and has some sweet coverage of all things 2D, both past and present. (Future, too!) Click over there, read the Karnov coverage (nostalgia GET!!) and tell them I sent you.

In the last bit of game news tonight, I was invited to participate in taping another episode of the Big Red Potion podcast. The topic was "grinding" in games, and without trying to sound like I'm tooting my own horn, I felt like the discussion that occurred was a really interesting, quality one. Many thanks to Sinan Kubba (@Shoinan) and Joe DeLia (@SlamVanderhuge) for having me on, and it was a pleasure to co-guest with Jared Newman (@ThePimpOfSound). It's not up yet, but I'll post a link when it's available for listening.

Funny that you mention Silent Hill: Shattered Memories; I JUST started playing the PSP version yesterday. Not sure if I really like it yet. Silent Hill was always a rather shallow series gameplay-wise: go to point A, solve puzzle B, go to point C, use object gained from puzzle B. Shattered Memories makes it even more simplified, although there is something alluring to the polished presentation of the game that was definitely missing in Origins (perhaps the worst game in the series). So glad you’re enjoying Dead Space: Extraction. It was one of my top 5 favorites of last year… Read more »