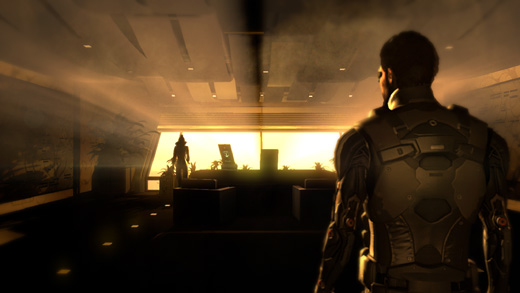 Finally got my hands on Deus Ex: Human Revolution

and currently playing it on 360. As a huge, huge fan of the first Deus Ex, I've been cautiously excited (emphasis on cautiously) at the prospect of getting another entry in the series that wasn't as awful as… Project: Snowblind, and you know what, I think we may just have gotten it.

(I bet you thought I was going to say Invisible War, weren't you?)

I had basically given up all hope that we would ever get another game like the original, but after putting in a few hours today and getting through the first two major "areas", I've got to say that so far I am incredibly pleased and happy with the way the game has turned out.

As is proper, I've seen plenty of opportunity for player choice between combat/stealth, and I haven't yet found a scenario that I wasn't able to complete in the way that I wanted. Although the game is mostly first-person, it's far from being a standard first-person shooter and both requires and rewards thinking and exploration on the part of the player.

In terms of style, I'm playing as the ultimate Boy Scout at the moment… I haven't killed a single person and every major choice that I've come across (at least, that I'm aware of) has worked out in a mostly positive way. Well, I guess I might have knocked out a detective who was minding his own business in one of the upper floors of the police station, but that shouldn't really count.

It's been great, great stuff so far and I've been enjoying every moment of it.

Although I'm still quite early in the adventure, based on what I've seen, I would have no problem recommending this to anyone. In fact, the only word of caution I would share so far is that it seems hacking plays a pretty huge part in getting past obstacles. That's to be expected, but I think that maybe the game puts a little too much emphasis on it too early. Luckily, I put some points into the skill right away, and my advice would be that most players do the same.

(Thanks to @SidShuman for the initial tipoff.)

They should have just done what they did in Deus Ex 1. That is give out skill points after completing objectives, so that you don’t feel obliged to complete the mission in any one way. When you give out skill points based on the actions themselves, it must become difficult to balance the different styles of play.

It rewards you more, but it’s riskier. Actually hacking a level 5 terminal, even if you have all hacking augmentations, is not necessarily easy. You’ll probably need a virus or two, sacrificing a few resources to gain these XP. Taking down silently every guard in every room is also quite challenging, if not downright nerve-wracking. If you’re going combat heavy, chances are you’ll be dealing with every enemy in the building as they rush towards you (you’re also collecting their ammo and money). If you’re going stealthily, you’ll avoid most of them. So the differing rates doesn’t seem that absurd,… Read more »

I don’t know man. I think it’s just bad design in a game about choice if one type of choices always rewards you objectively more than the others. And it’s not his fault if he wants to earn more XP, that’s how RPGs have educated us. You’re weird if you want less XP.

[quote=Alv]What player choice exactly? Mow the guard down with your rifle, snipe him in the head, tranquilize him in the head, use a grenade, reprogram a turret or approach quietly for a take down?[/quote] …or just bypass the whole room or not take on a side mission at all? Look for an alternative route? Ignore the hostages or free them? Tell those people who want you to fix stuff for them to get lost? Choice in DXHR is not just what weapon you use for the job. Except for the boss fights there are always multiple solution for a problem.… Read more »

What player choice exactly? Mow the guard down with your rifle, snipe him in the head, tranquilize him in the head, use a grenade, reprogram a turret or approach quietly for a take down? Use a code, use an automatic hacking device, or actually try to hack the computer? In both cases the option that nets you the most XP is the latter option, hence no choice. Ergo, the XP system is fundamentally broken because it dis-incentivises actually trying to play the game in differing ways. It fundementally encourages the player not to try out different solutions as the game… Read more »

[quote=syrik]I mean the AI will line up waiting to be shot. From cover you can put your crosshairs over their heads and take them all out while they stand in the same place, not advancing. Simply hiding behind a box or around a corner will make enemies stop looking for you. [/quote] That is true, the AI can be a bit thick at times but at other times it was relatively clever. I found the AI has a bit problems with differences in height and they could have increased the original DX cone of vision for them from 90 to… Read more »

I mean the AI will line up waiting to be shot. From cover you can put your crosshairs over their heads and take them all out while they stand in the same place, not advancing. Simply hiding behind a box or around a corner will make enemies stop looking for you. At least enemies in games like the one you mentioned will try to dodge, advance and flank you. These don’t. Enemies in very old titles like Half Life 2 or Crysis (newer but still old) are much more complicated. As for story, right in the beginning an employee comes… Read more »

[quote=Alv]I’ll admit comparing it to MW1 is a bit wide of the mark, but my point still stands – this game brings very little that is new to the table.[/quote] Well, you can do exactly the same argument for 99.9% of games published. Each individual element is indeed nothing really new but the combination of them is something I haven’t seen in years. What single element did Modern Warfare 1 have that was so revolutionary? Perks? Just glorified RPG-elements and they existed way before. It was the well crafted combination of old ideas and new ways to look at them… Read more »

Play the game with lethality, shoot opponents and do some run and gun. The glaringly bad AI and overly simplistic combat will rear it’s ugly head and you will see the game in a different light. Also, didn’t you have problems with some quest/story elements, as in they don’t make any sense?

[quote=Li-Ion][quote=Alv]In short, this is another entry in the over burgeoning ‘good but not great’ shooter/FPS bucket. When was the last time we had a truly GREAT FPS? [/quote] Since when is Deus Ex a shooter? It’s not even FP most of the time in my case, since all the sneaking puts me in third person perspective. It’s an action RPG and has much more in common with Mass Effect than with Modern Warfare. With DXHR giving a much greater degree of freedom than Mass Effect. Comparing DXHR with Modern Warfare is a bit like comparing Ultima Underworld with Doom or… Read more »

I agree with the above statement.

At one point for about an hour I wasn’t shooting or fighting anyone, I was mostly exploring and finishing side quests. When ever their was a point for me to confront enemies, I sneaked around them punching a guy out here and there.

The original Deus Ex is one of my favorite titles and I was quite surprised on the similarities when comparing both titles. However, I think it is a shame that the game seems biased towards stealth play.

[quote=Alv]In short, this is another entry in the over burgeoning ‘good but not great’ shooter/FPS bucket. When was the last time we had a truly GREAT FPS? [/quote] Since when is Deus Ex a shooter? It’s not even FP most of the time in my case, since all the sneaking puts me in third person perspective. It’s an action RPG and has much more in common with Mass Effect than with Modern Warfare. With DXHR giving a much greater degree of freedom than Mass Effect. Comparing DXHR with Modern Warfare is a bit like comparing Ultima Underworld with Doom or… Read more »

Worth the price of admission, for the atmospherics, music and more RPG-like mechanics than most shooters, but not many will feel too nostalgic for this in years to come. Hacking – BSG (Been there, Seen it, Got the t-shirt) Stealth – BSG Security cams, cones of vision, etc – BSG Shoot from cover to cover – BSG Cloaking – BSG Pistol, Machine Gun, Shotgun, Sniper Rifle, Rocket Launcher – erm, BSG EMP, Frag grenades – BSG STUPID AI ENEMY- BSG ‘World in peril’ storyline – BSG In short, this is another entry in the over burgeoning ‘good but not great’… Read more »

and I love it so far. I don´t mind the hacking minigame and I found that so many people leave their passwords unattended, that I didn´t _have_ to hack most of the stuff. But I did anyway for the xp. Yeah, powergamer me 😉

I also wonder how bad are people with conserving ammo that they would run out of ammunition? I have started to sell ammo because it’s just taking up too much space in my inventory. I guess those complaining about the ammo constraints never played Resident Evil.

If you can conform to knee high wall issues…. I miss jumping and couching for cover >>, still cant wait to get the game got it ordered should be in soon and for 30$ new, love you ebay! THo I dub it IW2 and will call it that till I finish the game 😛

I was a stealthy fighter in DX, I loved the mini cross bow!I hope I can do that again in DX:HR!!

I’m like 7 hours in — and so far, I’m pretty mixed on it. While you can move through just about any situation however you choose, the game rewards you with significantly more experience for not killing people (a knockout takedown earns at least double exp, from what I’ve seen), which annoys me — the angel of death incarnate — greatly. Secondly, yeah — the game is fucking full of hacking. This is great if you like the hacking mini-game, but I do not. In fact, I find it annoying that I’m in a game like this, with this gorgeously… Read more »