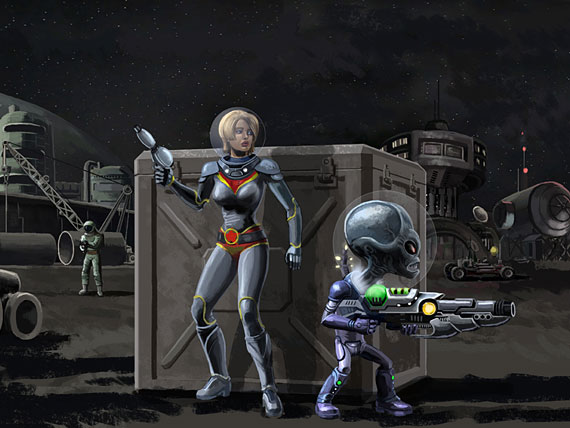 In my recent review of Rockstar's Bully, I called the game on the carpet for being a one-off, more-of-the-same experience that neglected to polish the rough spots permeating all of that developer's titles. It's an interesting coincidence then, that my next game up for review would be Pandemic's (DAH2). A textbook sequel in every sense of the word, DAH2 is even guiltier than Bully of hewing closely to a previously-established formula. However, Pandemic has made great strides to polish and improve an effort that was quite enjoyable the first time around, and their work is appreciated.

Starring the same antisocial alien from the first Destroy All Humans!, DAH2 advances the story forward 10 years, leaving the Red Scare '50s behind to examine (and ridicule) the Free Love '60s. It's great timing, actually, since the invading gray Cryptosporidium and his leader Orthopox manage to clone genitalia for themselves at the game's opening. 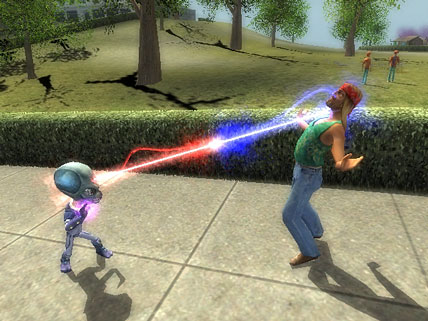 Although artificially generated nubby bits and their use is riffed on several times throughout the game, DAH2's real draw isn't the hit-or-miss writing, but rather, its open-world "sandbox" style play.

Roughly analogous to something like Grand Theft Auto with flying saucers, Destroy All Humans! 2 provides a focused and polished experience. Employing several different types of weapons at Crypto's disposal both on foot and in his UFO, players are free to follow the story's tasks or to simply explore and demolish things. Locations under attack include a bleak Russian installation, a growing Tokyo look-alike (complete with warring ninja factions), and of course, a hippie-fied segment made to resemble the famous Haight-Ashbury area so prominent in films and media from that era.

To be perfectly frank, the only difference between DAH2 and its predecessor is that all of Crypto's abilities and equipment have been reworked to function painlessly. Crypto can transmogrify inanimate objects to instantly replenish ammunition, his saucer can regain health almost immediately, and the game offers two different abilities which are capable of nullifying large groups of attackers. An even more significant difference is that after being defeated, Crypto is re-cloned without losing any progress while a mission is underway. There are a wealth of other small touches that will probably only be noticed by people who played through the first game (the ability to find hidden items is a great bonus) but the end result is that Destroy All Humans! 2 is much friendlier and less frustrating than the original. In my book, this is an extremely positive thing. 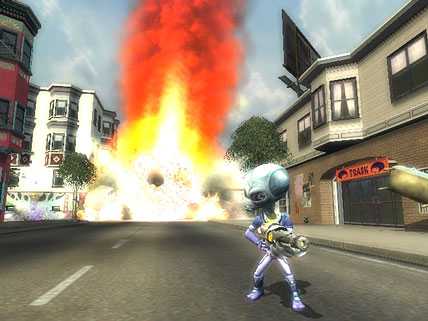 I enjoyed tossing tanks into the ocean with telekinesis and leveling city blocks with my destructo-ray, but there's nothing here to win over people who didn't appreciate this formula the first time. Pandemic has done an admirable job of improving something that was better-than-average to begin with, but any future installments should be cautious about making another trip to the same well. Rating: 7.5 out of 10