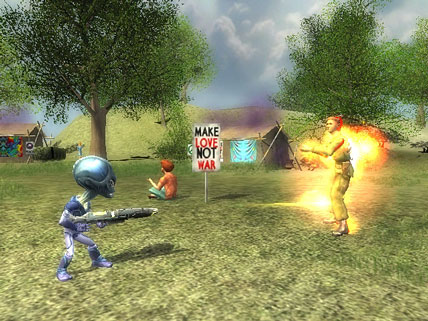 Parents should be cautious about letting their children play this game. Despite the "T" rating, incidents of salty language popped up more frequently than I would expect, and the level of sexual innuendo is through the roof. Although things never get extremely graphic, my feeling is that this game is bordering on "M" territory. In terms of violence, players are capable of disintegrating passersby, as well as hitting them with the old anal probe and watching the brains explode out of their heads. It's great fun for people mature enough to appreciate the content, but my gut feeling is that young ones should stay away.

Fans of the first Destroy All Humans! can expect a clone (ha ha) of the first game, with the exception that all the mechanics have been completely re-tuned to be a lot more player-friendly. The difficulty level is also much lower than the first game, and the entire adventure is quite frustration-free. I didn't find the writing as humorous this time around, but there are still some good chuckles to be had, and in general, the game is as smooth as butter. If you liked it the first time, you'll like it this time.

Sandbox gamers who enjoy the open-world set up of something like Grand Theft Auto will likely appreciate this game, though it is definitely on a smaller scale. The story and missions are more focused, the areas are smaller, and there isn't as much content as the genre's current front-runner. These things are not necessarily negative, however, and as someone who can enjoy games that don't devour every ounce of my free time, I felt there was enough to satisfy.

Deaf and Hard of Hearing gamers have the option to turn on subtitles in the game's menu. Although practically all of the dialogue is delivered via voice over, Pandemic did an excellent job of captioning the speech and I had no problems playing the game with the volume turned completely off. A tip of the hat to Pandemic for making sure the audio side of this game was accessible. Thumbs up.