The Most Boring Game I Can't Stop Playing 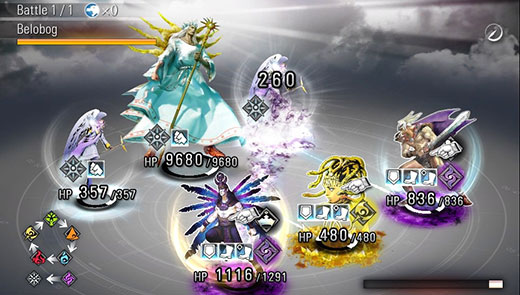 HIGH Getting a super-rare spirit from my free daily team-up.

LOW It can't be played without an active internet connection.

WTF Why does the game never overtly explain Limit Breaking?

As someone who's happy to pay a fair price for a game that delivers fair value, I'm not a big fan of Free-To-Play (F2P) titles. I'd rather dig into something without getting hung up on cooldowns that require cash or time to get around, and few things disappoint more than seeing titles that would be great without the nickel-and-diming. Despite these feelings, there have been a few F2P titles that have kept me coming back. Marvel Puzzle Quest on iOS was the first, and it's now joined by Destiny of Spirits on the Vita.

To be brutally honest, Destiny of Spirits is a hands-off, crude-looking title that's mostly about crunching numbers in menus. It initially comes off as shallow and sedate, and does basically nothing to ‘wow' new players. My first two sessions actually happened weeks apart, because it was just that exciting. In fact, I nearly deleted it after my first taste.

However, I did come back. Why? Mostly because it seemed mellow enough to be played right before bed. After a few nights of poking around, I started to figure out how it worked, and more interesting things started to surface. It was definitely still boring, but I kept playing. And playing. And playing. Before I knew it, I'd put over eighty hours in…

As the game begins, the player is shown an Earth divided into hundreds of small territories. Wherever the player is located in real life becomes a cool blue ‘home base', and the rest of the globe is possessed by hostile red spirits. The goal, of course, is to conquer each red square on the planet and reclaim the world.

Taking territory is a fairly simple affair. The player puts together a team of up to five "spirits" based on preassigned point values (weaklings are worth 1, bruisers are 4, etc.) before choosing a red square and facing off against its enemy occupiers. Then, the player sits back and watches as each spirit's Speed stat determines how often it attacks. Simple touch controls let the player choose a target, and every once in a while a button will pop up that needs to be pressed in order to hit an enemy for extra damage—that's about it.

It seems impossible that gameplay as static as this would suck me in, but I found something quite hypnotic about watching the spirits auto-attack. Trying to predict the winner in each miniature war of attrition feels a bit like watching a horse race; you can't do much more than cheer, but you're glued to the action anyway.

Hypnotism aside, a big weakness of mine is strong artwork, and Destiny of Spirits has an incredible number of creatures from different cultures illustrated by different artists. Although they don't animate during combat, many of the pieces are quite beautiful—even stunning—and I fell prey to a vaguely Pokémon-esque urge to collect ‘em all.

Destiny of Spirits also has an interesting approach towards quasi-social gaming. The player can "friend" compatible players, and some of their spirits are able to be hired on as assistants during tough fights. Every 24 hours, the player can also do a "partner" summon with a friend, and both get a new spirit for free. It's also possible to trade spirits between people. All of these functions are done asynchronously and there's never direct communication between players, but they definitely add value to the experience.

On the other hand, I think it's often true that you get what you pay for, and since Destiny of Spirits is free… Well, let's just say that many areas are in need of polish or redesign.

One of my biggest complaints is that the game constantly checks in with a server (it's not playable without an active internet connection) and because of this, the loads are long and frequent. Even when simply jumping between menus, the game has too many annoying pauses.

Speaking of the menus, the entire user interface needs to be redone from the ground up. It takes too many taps to do basic tasks, and things need to be consolidated or streamlined. For example, it took me an absurd length of time to figure out how to trade. Rather than having its own dedicated tab, I had to jump back-and-forth between offering spirits in Communications and checking the Friends area see who had something for offer. The setup is far from optimal, and the constant server check-ins make it all worse.

Those things annoy, but the biggest issue for me is the in-game economy.

Like other F2P games, Destiny of Spirits has multiple currencies: one is used to buy spirits via random lottery, another is used to level them up, and the third is cash-based and used to buy a higher class of spirits, to expand the roster, or to perform other functions. The game is fairly generous with the first two, but the third feels totally out of whack. Although it is absolutely possible to play without spending a dime, progress will be slow, a team of low-rank spirits will be underpowered, and defeats will come often.

Not only does this F2P implementation have a clear impact on play, the purchases also feel overpriced. At the mid-tier of a sliding scale, a player can get about three upper-tier spirits for $8, more or less. Considering that draws are random and not exactly dirt cheap, the end result is that I choose to spend less than I might (or none at all) because I don't feel like I'm getting good value for my money. A little balancing would go a long way towards making this system feel more like an enhancement option and less like a game-choking ploy to get cash.

Although I'm not satisfied with its economics and it still needs polish, I freely admit that Destiny of Spirits remains strangely compelling, and putting together a roster of fantasy creatures holds appeal. With just a little more work, I'd probably put a few more dollars in and play it more often than just at bedtime…Rating: 6.5 out of 10.


Disclosures: This game was obtained via free download and reviewed on the Vita. Approximately 85 hours of play were devoted to the single-player mode, and the game was not completed at time of review. There are no traditional multiplayer modes, but trading and asynchronous team-ups are always possible during play.

Parents: According to the ESRB, this game contains: violent references, sexual themes, and partial nudity. To be frank, I'm not sure what a ‘violent reference' is. The characters are illustrations that don't animate or interact in any way, and they vanish in a puff when defeated. The sexual content refers to some of the female spirits who are sometimes busty, or scantily-clad. Nothing explicit, just teeny bikini-type stuff.

Deaf & Hard of Hearing: No problems. There's no dialogue at all past the tutorial, and all information is presented via text. It's totally accessible.