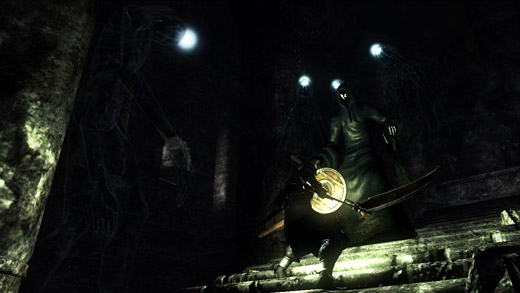 I had to put Demon's Souls aside for while to cover a couple of must-review titles, but I decided that I was going to take a break from reviewing for the weekend and just play for fun. Popping it back in my PS3, I was instantly sucked back in. Taking that short time away, I had forgotten how ridiculously awesome it is. The atmosphere, the feeling of exploration… everything. I totally love this game.

That's not to say the game is flawless, though—it suffers from the same issue so common to many RPGs in that the developers want you to choose the type of character you play before you really know what your preferred play style will be. Of course, everyone has their leanings. I tend to play brute strength characters and tanks most of the time because I don't like relying on magic spells when there is the danger of running out of mana, energy, or what have you. I went that route this time (choosing a female Temple Knight at the outset) and I've been generally pleased, but it takes a lot of effort to give a TK magic ability, and more than a couple times I've wished that I had a little more potency in terms of long-range attacks. Of course, by the time I realized that having the option would be desirable, I had already put so many hours into the character that the idea of starting over was not appealing at all. The same choosing-too-soon trap happened to me with Oblivion, and to this day I'm convinced that developers shouldn’t make a player commit to a class until they've been able to spend an hour or two noodling around.

There are a few other things that I can nitpick as well. The first is that since I'm playing a female character, it's been a little frustrating that every new set of armor I've found has been male-only. I'm hoping that I find some new stuff to equip before too much longer, but this gender bias means that I left piles of bright, shiny kit behind for the goblins to pick at, and that doesn't make me happy.

The other thing that needs a tweak is that the game should make it a little easier to compare the equipment you’ve already got on to the stuff you're considering purchasing, or stuff you’ve found in the field. It's a little hard to tell when something is actually "better" or has special properties.

For example, the shield my character started with was extremely tough, but I found one later on that had the exact same numbers in terms of statistics, but seemed to have special elemental resistance. However, I couldn't confirm that. Maybe I'm not looking in the right place or at the right screen, but it seems to me that this type of information could be a little clearer.

Those issues are just nitpicks, though… Demon’s Souls is still one of the best games I've played this year, and is certainly one of the best in its genre, overall. If you're a PS3 player who's got an interest in the Action-RPG genre and you haven't pre-ordered this game yet, you’re crazy. You are of unsound mind. Literally.