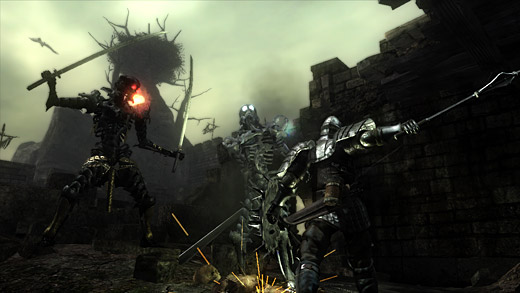 Over 30 hours into Demon’s Souls and 2/5 of the worlds completely cleared… suffice it to say that this game is having no difficulty whatsoever keeping my attention, and I continue to be impressed with the levels, the design, the extra elements, the hidden stuff—pretty much everything. It's also worth noting that this game, pound for pound, has more genuine OMFG moments than anything else I've played in recent memory.

I hate to sound like a broken record by praising this game so repeatedly, but it's such a fantastic title and I'm more than a little concerned that it's going to be written off as "too hard" or simply ignored by the masses who are going to be flocking to the latest military FPS or sparkly driving game. I mean, I'm not totally naïve—regardless of what I say, there's no getting around the fact that Demon’s Souls is simply not a game suited for every player. However, if I can help get the word out to those players who are so inclined, then that's what I'll do.

It's not perfect and there are certainly a few things I'd change about it, but overall, I'm feeling like it's going to be a shoo-in for the top spot in my 2009 Game of the Year rankings. It's not a lock since there are one or two games that I think might have a chance of unseating it, but those titles would have to be pretty unbelievably fantastic to knock it out of first place. 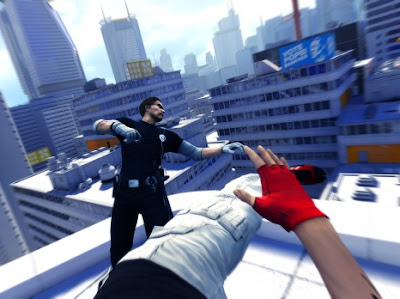 In other game news, I started Mirror’s Edge as my "daytime" game.

(Since you can’t pause in Demon’s Souls, it can be pretty inconvenient to play during business hours or when the baby's awake. Thankfully, the start button works quite well in Mirror’s Edge.)

Anyway, I remember being inundated with the hype back when this title first hit the scene, and I couldn’t really wrap my head around what was supposed to make it so special. I mean, the entire premise of the game is that you do "acrobatic" maneuvering through levels in a first-person perspective. I made note of it on my list and decided to come back later after all the excitement had cooled off. I just wasn't buying it.

After picking up a deeply-discounted copy a weekend or two ago, I'm very glad that I waited. At this point, I'm a little less than halfway through the game, and it's already starting to feel stale. The controls don't come together as tightly as they should for a game that's all about navigation, and while it can be fun to build up some speed and pull off some scary jumps, the game comes to a screeching halt when indoors thanks to some confusing level design and other generally not-fun stuff.

Honestly, it reminds me a little bit of the first Assassin’s Creed. That game had one core mechanic driving it (the climb-anywhere navigation) and the developers struggled hard to create a game to go with it. It seems like much the same situation here… someone at DICE thought it would be pretty cool to do some ho-hum platforming from a non-standard viewpoint, but there doesn't seem to be much else to this title besides that. I'm down to doing one level per day at the moment… it's a little too dull to sit through more than that. 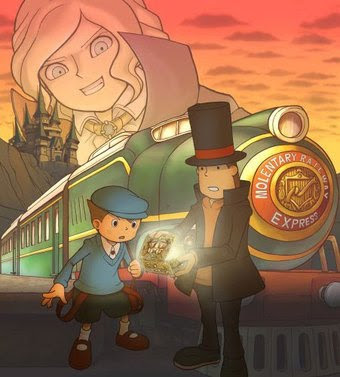 Finally, I haven't had a lot of time for gaming on the go, but I have been able to sneak in a few minutes of Professor Layton and the Diabolical Box here and there. Playing this title, it's become quite clear that my wife is the puzzle expert at our house.

She had first crack at it and blew through the game in a day or two. While I definitely agree that the puzzles seem easier this time around, I'm not getting through it anywhere near as quickly as she did. It's a bit humbling, perhaps, but at the same time it's pretty cool that my wife can pwn me now and again.

i think it’s just the sheer ambiance and art design of the whole game that really sets it apart from everything else. i found it immersive and absorbing enough that i could mostly look past the less-than-perfect mechanics and pretty horrid storyline. it’s probably the audio too which is one of the game’s biggest strengths. i didn’t even have a problem with the shooting mechanics either. i don’t play a whole heaps of fps, but they seemed competent enough, given how little they’re used in the actualy game anyway.

I likewise picked up a discounted copy of Mirror’s Edge a few months back but unlike Brad Gallaway I was positively surprised by just how fun the game was to play. The review backlash had been pretty unrelenting ever since the game hit the stores (I didn’t pay much attention to the preview hype so I can’t really comment on the usual “this game will change your life” histrionics prior to the game’s release), but while playing through the game I found myself getting more and more puzzled as to why more reviewers hadn’t recognized the exhilirating breath of fresh… Read more »

At the moment the only one that leaps to mind as a possible is Dragon Age, but it seems like I had another name in mind that now escapes me. Need to look at the remaining Q4 games to refresh my memory.

[quote]It’s not a lock since there are one or two games that I think might have a chance of unseating it, but those titles would have to be pretty unbelievably fantastic to knock it out of first place.[/quote]

And those titles would be…?