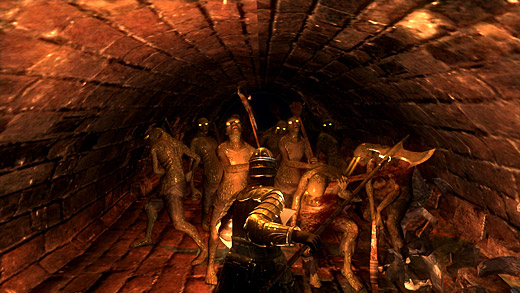 Another quick post for tonight since the son is still here, but I am quite proud to say that I just finished Demon's Souls tonight.

For people who haven't played it yet or might not really care: It's a fantastic, superbly-designed game that has officially knocked my socks off. One of the best PS3 titles available, and at this point, my Game of the Year.

For those who have played it or who do care: My character was a level 80 Temple Knight focusing on Attack and Defense for melee combat. My endgame weapons were a +7 Halberd, a +4 Dragon Sword, and a Lava Bow. All told, it took me about 35 hours, give or take. Too bad there wasn't a death counter, I would've been curious to see how many times I was revived.

Anyway, I have to say it was a stiff challenge to not use magic at all (not recommended, really) but I was too attached to my character to begin a new one and by the time I realized that magic might be a good thing, I was too close to the end to really start grinding levels in order to get some.

Besides those issues, the devs included plenty of options to let players tackle the the game any way they wanted, so why shouldn't I do it without spells? After all, the GameFAQs boards are full of players who beat the monstrous bosses by using the same few magic spells and I have to say that I got a small measure of pride by not relying on overused cheese tactics to get past the rough spots.

Now that the game has been put to bed (no, not going for a New Game Plus, I actually have to spend time with some other games now. I am a reviewer, after all…) I can definitely say that Demon's Souls was an incredibly epic experience from start to finish, and certainly one of the most unforgettable games I've come across in quite some time.

FromSoft… My most heartfelt congratulations on an outstanding, peerless, master-class title. You rocked my world.

You can get it if you want, but I warn you…this game is unforgiving. It’s really freaking hard, though after awhile it gets fairly easy if you play your cards right. Then once you’ve beaten the game and you’re feeling all proud of yourself, you get progressively more difficult newgame+ modes. The first of which is said to be a daunting 45% harder…I judged it to be 100% harder.

Thanks for the info, Bryce.

Turns out the reason I couldn’t see the stat info is that the first time i looked, i was still using the review copy that’s been disabled from online. there’s literally nothing in that room if you go offline, evidently.

I went back again with a retail copy (with net access) and it was all there, clear as day. mystery solved. = )

FYI Brad, you can go to the very top of the Nexus, look at the first pedestal on the right will say (Local) after the title – I forgot the title… Unifier of the World or something – and it will show some game finish statistics, including death count. Just to continue the conversation, I also just finished the game with a similar setup and about the same time. The only things I used a ranged weapon on were the manta rays and mosquitos. It really is possible although frustrating at parts. My stats were similar: A dragon mace +4,… Read more »

I picked up this game at launch and I have to say that I’m more than impressed. So far I’ve clocked more than 14 hours into the game (I’m a student, but I try to find the time) and am loving it. To anyone out there that’s still on the fence all I have to say is – go for it. You won’t regret it. I highly support this game, you really get your money’s worth. Brad put 35 hours into the game on his FIRST run. Thats much more than the average single player component of most games. Not… Read more »

Yeah, there is something visceral and meaty about going melee. that said, there are a few bosses that just *destroy* you up close. At some point you’ll definitely want to find a good bow and level it up a bit… it’s a real lifesaver in certain circumstances.

Oh yes. I just did what I said and ditched several hours of Royalty for a Thief. I beat the Tower Knight without ranged attacks after a handful of deaths and it was infinitely more satisfying than spamming magic arrows from behind a wall.

Honestly, I’m glad i did melee first. if i had gone magic first, i don’t think i’d be able to tough it out with just weapons and miracles afterwards. ^_^

Also that is impressive you made it through with all melee. I first tried a Priest and had a lot of trouble with areas past the first boss, then I tried Royalty and it felt like cheating. I’m restarting for melee!

I have to say I usually check in GameCritics simply because Brad Gallaway is an aging, crusty gamer like myself and generally has the same opinions. I agree with the Bioshock and MGS4 reviews completely just to name a couple and wish I read his FF: Crisis Core review before buying it… I since sold it back. I’ll just back up that as a jaded gamer who finds nothing impressive and everything has a “been there, done that” feel, Demon’s Souls is the most incredible game I’ve played in a long time. It has little in common with Baldur’s Gate:… Read more »

I loved Baldur’s on PS1, but Demon’s Souls is, like, on an entirely different plane of existence. It’s that good.

I read GameCritics reviews regularly, and it’s been a long time since I’ve seen Brad wowed this much by a game. It’s nice to read about your enthusiasm for this title, and I’m definitely going to buy it now. I haven’t played an action rpg since Baldur’s Gate 1 for the Ps2. Is it better than that?