It was a good week for demos this week, or at least, there were several new ones to take a peek at. Oddly enough, a full 50% of the demos I spent time with featured Vin Diesel's electronic likeness. His star may have faded in Hollywood, but find it interesting that he's still trying to make a mark in the Uncanny Valley.

The Chronicles of Riddick: Assault on Dark Athena. I was a big fan of the first Riddick game on Xbox. It was sophisticated, the graphics were cutting edge, and the game itself was much better than the source material that inspired it. As great as it was back then, based on this demo, it seems as though the industry has passed Riddick by.

To start with, the segment of gameplay featured in this demo was a horrible choice. It seems to be taken directly from the middle of some longer series of tasks, and doesn't show the stealth element that the first game was known for. Level design was in the "interstellar drab" style of metallic hallways and doors that look like walls, and there's an odd section where the player is asked to take control of a "drone" and leave the body of the main character. It might work just fine in the main game, but in a demo, everything here felt like it missed the mark. The graphics (another high point for the first title) weren't at all impressive, either… with clunky mechanics and unimpressive visuals, what was this demo supposed to show us?

Verdict: Rental… if I don't have anything else to play that week. 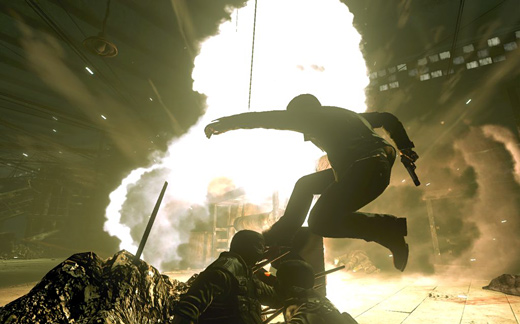 Wanted: Weapons of Fate. I haven't seen the film or read the comic that this license is based on. All I knew was that there was a new type of cover system going on here, and that shooting bullets around corners was one of the hooks. After firing it up, I can't say that I'm very impressed. Essentially, the demo takes place in the world's largest passenger jet and the player dashes from cover to cover while taking out terrorists, or henchman, or whoever they were. The controls felt stiff and clunky, and the animation wasn't nearly as good as I would expect. The voice-overs and tone were horrifically cheesy, and the cover system in the level shown (using the A button to dash behind walls, chairs, or other safe zones) suggests to me that the game will be based around using this gimmick, rather than the cover system supplementing a solid game. 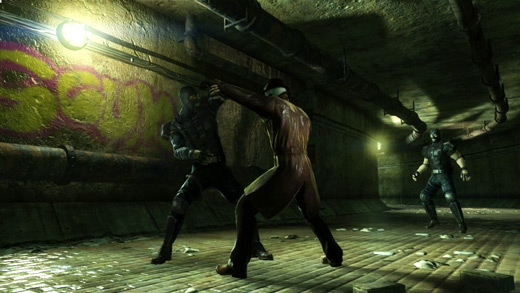 Watchmen: The End is Nigh. People who've seen the film tell me that it didn't fare too well on the big screen. If the demo is any indication of the complete product, this adaptation seems to be about as successful. Which is to say, not. Starring Nite Owl and Rorshach, the graphics are certainly impressive and a few of the moves (including the auto-targeting) were interesting, but this new take on the old-school beat'em-up genre left me feeling bored before I even reached the end of the demo. Walk forward, flip a switch, beat up a crowd of thugs, repeat. The worst part is, this game has an asking price of 1600 MS points (aka $20!!!) which is about twice what I feel comfortable paying for downloaded content, and four times more than I'd pay for something so simplistic. 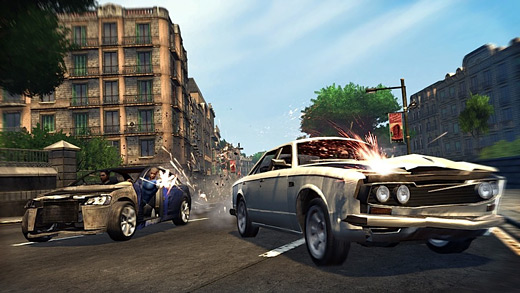 Wheelman. Surprisingly, the demo I expected the least from ended up being the one that was most interesting. The premise here is that Vin Diesel is a getaway driver, so the player will be doing all sorts of related tasks—escaping police, helping crooks escape with loot, etc. Out of the four demos I played, this one was definitely the best.

Taking the time to walk the player through each aspect of the controls and abilities, I appreciated the walk-through rather than most other demos' misguided efforts at tossing the player in the middle of a hot situation. The demo also features substantial content: one getaway mission and two side missions. Something I found intriguing (in a comical sort of way) was that the car I drove had "melee" attacks. When trying to get away from police, it was possible to forward and side smashes, resulting in spectacular explosions.

There were a number of other "special abilities" like spinning the car around backwards to shoot in slow-mo at pursuers, or destroying a car with one shot in order to get through a roadblock. It all seems totally over-the-top and ridiculous, but in a fun sort of way. One of the side missions also featured car-to-car leaping, similar to that found in Pursuit Force, one of my favorite PlayStation Portable games. I'm not sure how long my attention would be kept by an open-world game that focuses so much on cars, but I liked what I saw and would like to see more.

Verdict: I'm adding it to my list of games to keep an eye on.

Nhoj: my suggestion is to stick with Pursuit Force #1, and *NOT* the sequel. PF1 is damned tough at times, but they really nailed the intense action. PF2 lost everything tha was cool and really fudged it up.

Dan: re: rail shooter – you know, i felt exactly the same way. i felt like it was almost kill.switch 2.0, except that i actually enjoyed kill.switch.

Wanted – Passable action – the cover to cover thing works as well here as it did in Quantum, but the fact that cover is omnipresent almost makes it feel like a rail shooter for some reason. Bullet curving worked fine for me, although I rarely managed to get headshots. Wheelman – As the world’s foremost fan of car combat games (and the only person who liked 187: Ride or Die as a result) this demo got a 36 on the 27-point patented ‘Dan’ scale. Literally can’t wait to get a hang of the real game. Bought Watchmen sight unseen.… Read more »

I was underwhelmed and disappointed in the Riddick and Wanted demos. The cover system works fine in Wanted, but the curving bullet gimmick hardly every worked for me. It just never functioned correctly. It was easier to roll from cover to cover, then use a melee attack. I had the same complaints as you did with the Riddick demo. Wheelman wasn’t even on my radar, but I thought what the heck. I’ll go ahead and download the demo. I must admit. I had a crap load of fun with the game. The car combat is some of the best I’ve… Read more »

Riddick was, along with Splinter Cell: Chaos Theory, my favorite game for the old XBox. I have very high hopes for the sequel/remake. Hopefully they are not just going to phone this one in.