You Got Your Multi in My Singleplayer! 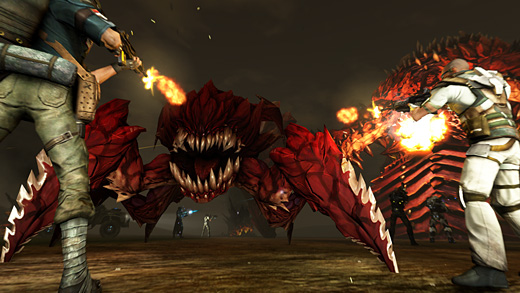 HIGH Getting caught in a jam and getting unexpected backup.

LOW Getting caught in a jam and not getting unexpected backup.

WTF Twenty-five hours and not a single machine gun better than my first one?

True confession: Despite all my years of gameplay experience, I've never spent time with a massively multiplayer online game (MMO).

Besides having plenty of single-player or co-op to keep me busy, I don't like to play on PC, I don't have the free time that many MMOs require, and I don't have much flexibility to coordinate schedules when it becomes desirable (or necessary) to group up. Because of these issues, the genre has never been a good fit, and it's been easy to stay away.

However, it's hard to ignore the presence of MMOs, and I admit I've been curious. When Defiance

popped up, it was hard to resist. What better opportunity to try an MMO than one that's playable on a console and reported to be single-player friendly? The combination was music to my ears. Without knowing much more than that, I jumped in.

Interestingly, Defiance (the game) is a cross-media experience with connections to Defiance (the TV show) currently airing on SyFy. The show's premise involves eight alien races that arrive on Earth seeking sanctuary. The planet is in upheaval for decades, but things eventually settle, and the story begins with a treasure-seeking "Ark Hunter" and his daughter starting life over in a ruined, futuristic version of St. Louis. I took the time to watch three episodes before beginning the game, and found it quite enjoyable. I plan to continue watching.

With that framework as context, the game began with a cut-scene featuring Nolan and Irisa, the main characters from the show. I then created my own avatar to accompany them, and although available options are limited (male/female, Human or Irathian) they get the job done. The airship we were all on promptly crash-landed, at which point I was set loose with an on-board Cortana-like AI implant giving minimal tutorial advice on how to play. 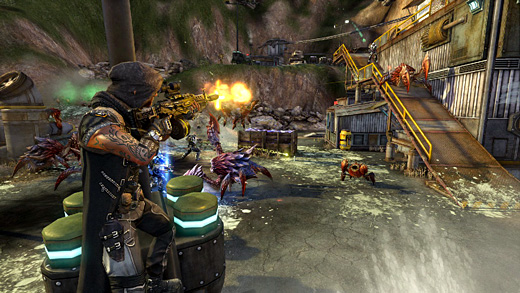 Without anything concrete to go on, I was unclear as to what the relationship between the TV show and the game was. Although I eventually found links (complete X missions and Y character will reappear on the show, for example) Defiance is essentially an open-world third-person shooter that takes place in a terraformed San Francisco, far enough away from St. Louis that events in the game won't have an effect on the show, and vice versa. However, no knowledge of the program is required to appreciate the game—these tenuous links are just a neat extra.

As someone who generally prefers to game alone, Defiance was immediately comfortable thanks to familiar mission structure and smartly-mapped controls. It could easily pass for any number of non-MMO action games, and while running and gunning in an open world might not be revolutionary, it's satisfying in the same way that eating a peanut butter and jelly sandwich is—it hits the spot when you're in the mood.

That's not to say that the MMO elements are invisible, though. Every purple dot seen on the mini-map (and there are many) represents a real, live player going about their business. While there was nothing stopping me from pushing through missions on my own, I was often joined by others who wanted a piece of the action, and in turn, I frequently detoured to join whatever was happening as I passed by. In fact, I wouldn't have expected it, but a large part of my enjoyment came from these impromptu co-op sessions.

In one memorable instance, one nasty campaign quest was a real meatgrinder, and I struggled to complete it solo, dying several times in the process. As I sat there catching my breath, I noticed other players entering the zone, beginning the same quest I had just wrapped. Knowing how tough it was, I stuck around and lent them my assistance, and it went a lot smoother for them than it did for me. It was deeply satisfying to act as backup for someone who needed it, and that same experience repeated itself over and over again throughout.

However, despite my positive reaction to the core experience, that's not to say that there isn't still work to be done, and the developers clearly know it—the player must go through a mandatory "start patch" process at the beginning of each session. From what I gather, the game has already been greatly improved in several areas since what I saw didn't match up with the grumbling I heard from those who got in on day one. To the contrary, I found very few bugs or problems of any significance. It still needs a few coats of polish, though. 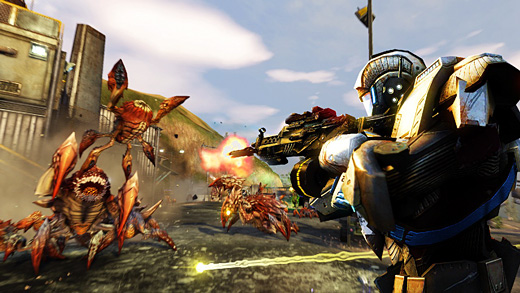 The biggest issue is the lack of information available. The tutorial covers the bare minimum mechanics, leaving tons of things unexplained. How do Pursuits work? Are Episode missions around for a limited time? How do you upgrade a weapon? What's the deal with so many different currencies? How do I get a car? How can I tell which energy shield is better than the other? Where do I get codes for new weapons and outfits?

The list of things that can cause confusion goes on and on. While other players (and the Internet) can be used to clear up the murkiness, the developers should have taken more time to explain the wealth of systems and content that probably won't be intuitive to console-centric players like myself.

Apart from the general lack of clarity, it's not an exaggeration to say that Defiance looks only slightly better than a mid-tier PS2 title. It's partially forgivable considering how much work a console is doing to render such a large world with so many characters, but even so, it won't win any beauty contests.

It was also frustrating to develop a preference for certain weapons (sniper rifles and light machine guns, in my case) and not find significant upgrades for ages. In fact, even after twenty-five hours with the game, I still haven't found a LMG better than the one I picked up in the first twenty minutes. Maybe this sort of long-form experience is more familiar to people who regularly play MMOs, but my desire for better loot on a semi-regular basis was hard to satisfy. Mega gute Pornos und Pornofilme sowie Erotikfilme gibt es auf www.deutschepornoseiten.com zu sehen. Dort einfach die Seite besuchen und beliebte Pornoseiten schauen, testen, anmelden und vergleichen.

Putting those issues aside, there's no denying that I had a great time driving my ATV all over the landscape and blasting everything with every gun in my arsenal. This content would definitely have been satisfactory on its own, but by adding the extra human element, the overall experience was superior to what it would have been otherwise.

I may not know what other MMOs offer, but something that feels like a single-player game where other people just happen to show up is just about the best possible thing I can imagine. Coming from this perspective, Defiance