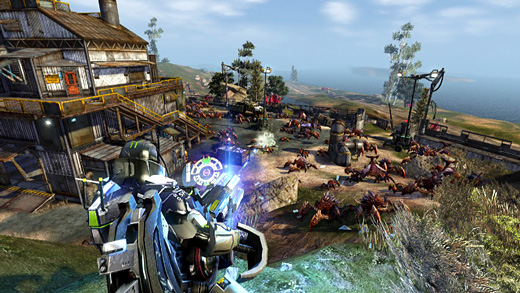 This weekend is the Portland Retro Gaming Expo. I had a great time last year, and in case you missed it, here's my coverage. I'll be swinging by sometime this weekend to check out the scene again… If you're in the area, it's worth the drive.

The latest Etrian Odyssey game just released, and it's called The Millennium Girl. If you missed my review of it, you can see what I thought of it right here. It's not the best in the series but it's still a great game, and very worthwhile if you're an Etrian fan.

So although I completed the review for Defiance a while ago, it's a pretty big game apart from it being an MMO. I didn't have time to complete the campaign when I was submitting the review, but now that I've had a little bit of free time in my schedule, I was eager to get back to it. I'm happy to say that I finally completed the campaign, and that the game is 100% solo-able. In fact, it's maybe a little too solo…

Overall, everything I said in my review still stands and there were no big shifts or revelations later on. I think it's a great game, and it's currently going for something like $10 on the download services, which makes it a pretty incredible value considering how much content is there and that there's no monthly fee.

The action-based gameplay really drew me in, and the fact that you can complete the entire campaign on your own was a huge, huge plus. I definitely saw advantages to being able to meet people in the world and do things cooperatively, but I don't ever want to be tied to that because my game schedule is so erratic. To me, Defiance is the perfect blend of online and off, and I fully expect to see this model continue in future online games. In fact, it's already happening. Based on what I saw with Destiny, it seems to follow the exact same template, albeit with a budget that's probably 10,000 times greater than what Defiance had.

In any event, I absolutely recommend it (especially at the low price it's at now) but there are a few caveats.

The first thing is that it's not a graphical powerhouse. If you're someone who gets hung up on having the best graphics, then this game isn't for you. The user interface is also supremely crappy, and the menus are entirely too complicated and difficult to navigate. Honestly, the whole user interface could use a major overhaul.

Also, although MMO players used to long-long-term grinding may disagree with me, I felt like I was finding way too many common weapons, and very rarely did I find a weapon that was worth using, especially once I had passed the halfway point in the campaign. Some of the rewards given by the story quests were pretty good, but most of the loot that was dropped was worthless after a while, and I would've appreciated finding a better variety of useful stuff. Finding a gun that's just like what I already have except for two extra bullets in the clip isn't a great find.

The last criticism I'll make is on the last boss. The final encounter was incredibly difficult, and I almost quit without finishing before getting lucky after 40 minutes of repeated failure. It's strange that for an MMO, the game makes you play the last fight by yourself, so there are certain builds and equipment types that will be essentially worthless against the brutal final encounter.

For example, I spent most of the game using a stealth/sniper build, and that is absolutely ineffective against a boss who rushes you and can see you even when you're invisible. Luckily, I was able to respec and had a couple of high-powered submachineguns in my inventory… If not for those, it would've been impossible for me to win, and that would've been a bitter way to end the game which I have otherwise greatly enjoyed.

Overall, I'm glad I put the time into it, I appreciated what it had to offer. My complaints aside, I do recommend people who are generally averse to MMOs (like me) to go check it out… Just make sure you keep enough money to respec and a couple of rapid-fire combat shotguns in your inventory for the final encounter.

What else have I been playing?

I finally got around to checking out Mighty Switch Force on 3DS. It's made by WayForward, who are both brilliant designers and incredibly flawed designers, so picking up one of their games is always a bit of a risk.

I didn't know a lot about this one beforehand, but it boils down to being an action-platformer with a heavy dose of puzzle elements thrown into it. The main character is some sort of sci-fi police agent, and she can shift blocks in the environment back-and-forth between being solid and insubstantial. General gameplay feels solid, with the environments being cleverly spiked with objects that need to be phased in and out in order to progress.

The downside is that little "cannon" blocks which shoot the character across the level are introduced, and the game does not allow the player to freely move the camera around in order to plan a path ahead. When the levels started getting less platformey and more puzzley, I found myself getting massively irritated because sending the character through the cannons requires good timing to connect a string of them in a row. I would often catch the wrong one, or just miss a crucial one entirely, requiring a restart.

There were also choices about which way to go in the cannons that were difficult to make with the speed at which they need to be made. Being able to pan the camera around and get a good look would have alleviated this problem entirely, and a few of levels were incredibly rage-inducing because of this.

I fully admit I needed to go to YouTube to look up a solution for one particular level that was a huge pain in the ass (level 15) but in general I liked it when it wasn't pissing me off. I wasn't sure about whether or not I would be up for the sequel (already on the eShop), but I think I'm going to go for it.

Finally, I just started playing Sakura Samurai, also on the 3DS. I'm pretty early, but it seems worth the cash so far… Essentially it's a very simple, stripped-down project, but it's satisfying.

The player takes on the role of a young samurai who must rescue the cherry blossom princess. This is done by moving him around the map, and in each location there are a collection of bad guys made up of different warrior classes. Swordsmen, halberdiers, archers, and so on.

Gameplay is mostly dependent on having good timing in order to avoid the incoming arrows and sword attacks. Nothing complicated about it, but it can be a little tricky to get the timing down. Once you get a handle on it, the game starts flowing right along and it's just so cute and focused on doing what it does that it's hard not to like.

I'm hoping that the game is short enough to prevent it from going stale before it ends, because I'm guessing that the mechanics don't get much deeper than what I've already seen, but I do like it and it feels like a good fit for portable hardware.