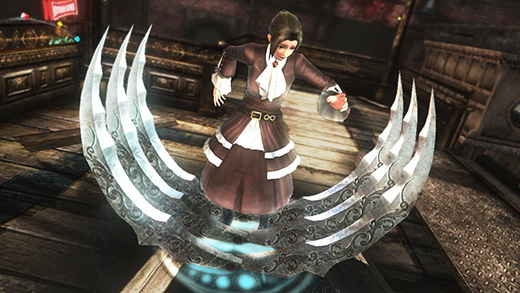 HIGH Pulling off a six-trap combo followed by a seventh gimmick hit.

LOW The obvious lack of effort put into updating the formula.

WTF Where are these high-tech assault troopers coming from?!?

, but I was a big fan way back when. The original debuted on PS One in 1996, spawned a couple of sequels, and then delivered Trapt (which I assumed to be the series-ender) in 2005. I never imagined this hyper-niche IP would be revived, but another entry is here. My excitement was short-lived, though—little has been done to update it in the nine years it's laid fallow.

The premise of Deception is that the player works for the forces of evil, luring people into a mansion or a castle, and then dispatching them with lethal traps. The main character has no offensive capability herself, so she must use the devices at her disposal in addition to various environmental features to effect the demise of her prey. It's rare that games ask players to assume a role that's outright evil, so it gets points for that.

Deception also scores with the traps themselves—with just a little work, any room becomes a chamber of death. For instance, it was easy to rig a room with an electroshock immobilizer to stun enemies before a giant blade sends them flying. When they land, they're impaled on spears from a nearby wall, and then I'd crush them with a boulder from the ceiling. Then, a floor panel catapult would lob them onto a bomb, the explosion arcing them into a scalding vat of molten steel. As one might imagine, This Is Good Times. Unfortunately, the developers lose sight of what makes Deception so great.

To me, the game is best when the player has enough time to orchestrate intricate sequences like the one I've just described. These Rube Goldberg-ian chains of pain often require a certain amount of timing to ensure that the victim gets bounced from one pitfall to the next, and simply watching it happen is enjoyable in its own right. As such, it's a mistake for the developers to put the player under too much pressure.

Taking on one bumbling knight or fearful townsman means they're at the mercy of the player, and it's easy to create outlandishly deadly combos they'll fall into. When the number and strength of enemies increases, the best (and usually only way) to survive is to drop the fancy ideas and rely on one or two quick traps while fleeing from room to room. With a pair of teleporting ninjas and a rifle-toting shock trooper in pursuit, any chance of gleeful experimentation with Deception's nasty devices goes out the window.  Worse, later enemies usually have multiple resistances to traps and tons of health, so not only does the game become boring, it also turns into a grind while wearing them down.

Apart from not letting the player comfortably indulge in its core concept, Deception compounds this inability to play by giving no chance to change traps once a level begins. Only a certain number of devices can be equipped at a time, and there are no mid-level saves. Selecting lightning-oriented traps before discovering the enemies are invulnerable to electricity isn't challenging, it's just a time-wasting inconvenience, and asking the player to potentially forfeit big chunks of progress just to change equipment is mind-boggling.

It's also a let-down to see that Tecmo didn't add much to enhance Deception's depth. I would have loved creating or modifying my own traps, using killed or captured enemies as resources, or having some options to make the environments more conducive to my playstyle. The series has experimented in all of these areas before, so seeing the current iteration attempt none of them while also failing to deliver an optimal trapping experience was the final nail in its spring-loaded coffin.

Although it was easier to give it a pass back in the day, Deception

is a series that has never perfected its own formula. This latest installment is no different, and actually achieves less than previous entries. Although it may look shinier running on newer tech, its core is in desperate need of a true update. In its current state, it's a relic with a coat of paint on top, and it's not likely to keep anyone's attention for very long. Rating: 4.5 out of 10.


Disclosures: This game was obtained via retail store and reviewed on the Vita. Approximately 6 hours of play were devoted to the single-player mode, and the game was not completed. There are no multiplayer modes.

Parents: According to the ESRB, this game contains: blood, suggestive themes, and violence. There's moderate cleavage on display and some of the characters (both genders) can be stripped down to their skivvies with some fancy attacks. The violence is pretty crazy, but it's not especially gory… People get impaled and such, but it doesn't really look like anything is happening. It's a little cartoonish, even.

Deaf & Hard of Hearing: I played this game without the sound on for about half of the time, and had no problems whatsoever. All dialogue is also subtitled (the voices are in Japanese) so it's fully accessible.