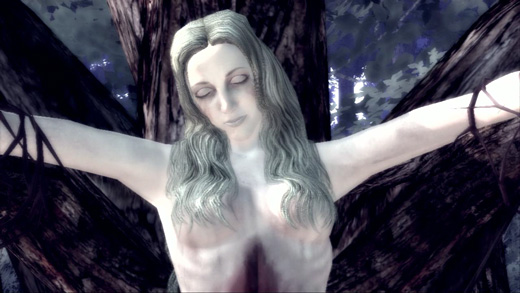 HIGH The feeling of truly playing a detective let loose in a small town.

LOW Combat doesn't belong in this game at all.

WTF Moments are too frequent to pick just one… in a good way.

Although I have nothing but the utmost respect for Sparky, my brilliant and highly-regarded fellow reviewer, I have to be honest when I say that this is one case when he and I are absolutely, utterly, diametrically opposed. In fact, I couldn't possibly disagree with his final analysis of Deadly Premonition more than I do. He's certainly dead-on about the production values and combat, but I part ways with him on the rest.

Before going any further, I think it's important to set the proper context for Deadly Premonition. Essentially, this title is a deep, passionate, and admiring love letter to Mark Frost and David Lynch, and their work on the seminal TV series Twin Peaks. The ideas, motifs and themes of that highly influential program ring loudly throughout every moment of the Deadly Premonition experience, and fans of the show will most certainly find themselves appreciative of SWERY 65's efforts here.

However, it's not necessary to have been a fan of Twin Peaks in order to appreciate Deadly Premonition—although it helps. What's really required to get the most out of this game is an appreciation for the bizarre, absurd, and alien crossing paths with everyday life. This is Urban Fantasy, in video game form.

Rather than bad writing or misapplied camp, it's more accurate to say that the game is idiosyncratic to the core, presenting a slightly exaggerated view of rural eccentricities in some instances, and exposing the gears of the game's machinery in others. Personality quirks abound, and nearly everyone the player meets has some sort of strange edge to them. That said, it's important to note that precious little of the game is actually intended to be humorous. There are certainly a few instances that verge on slapstick and others that are clearly meant to get a laugh, but those moments are few and far between. In my view, Deadly Premonition is actually quite serious and intriguing, and touches on many themes that can only be described as "mature" in the best possible sense.

Going further, I think I would say that main character Francis York Morgan is probably one of the most well-written protagonists I've ever played, and his supporting cast (and the script in general) are fantastic. I can certainly understand that the flavor of what's produced here will not be to everyone's liking the same way that not every viewer can appreciate a Lynch film, but there is definitely method to the apparent madness. When all of the threads come together, I wouldn't hesitate to say that the intellectual side of Deadly Premonition was anything less than brilliant. 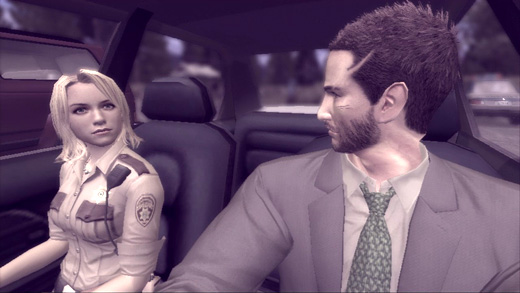 Every bit as good as the writing, the feeling of actually being a detective was pulled off in this game better than any other in memory. However, that's not the same thing as saying it was purely enjoyable. The developers managed to capture a certain sense of atmosphere in their virtual town, and I found much value in simply being in the relatively bleak space. Driving long distances between locations added to the feeling of doing legwork, and the difficulty of trying to locate certain citizens at various times of the day was both frustrating and realistic. This aspect of the game can be trying at times, but I actually respected it and appreciated the way it challenged my expectations as a player.

The thing that really put the detective work over the top for me happened when the local sheriff called all of the citizens together at the community center. After giving an informational meeting about the serial killings in their midst, I was free to converse with all of the attendees. In reality, this scene was a convenient way for the developers to introduce the town's residents and overtly tell me that I had the option to follow up and investigate any of these interesting characters. While the local folk may not all be directly related to the case, I didn't know this at the start, and it was incredibly intriguing to have an entire town's worth of people to check out at my discretion.

From that point onward, it wasn't hard to become immersed in Greenvale. The murders are horrific (and horrifically graphic), the blend of the mundane and supernatural was highly intriguing, and spending time with York and Zach in their sinister surroundings was not only enjoyable in and of itself, but the ultimate resolution of the story paid off in a surprisingly satisfying way.

In terms of the gameplay and production, there's no doubt that Deadly Premonition comes in woefully below par. The graphics can only be termed "embarrassing" and the combat… well, the combat is a bit of a special situation. To be blunt, the shadow world York enters and the zombies he kills serve no real purpose, and don't actually belong in this game. As was mentioned by Dan Weissenberger in his series of epic articles on the topic, it was as if the developers were afraid of releasing a game that hinged solely on playing the role of a detective and added the shooting as a way of hedging their bet. I tolerated these segments because the story and characters were so strong, but I would have liked the game even more if the combat simply didn't exist, or was relegated to vital QTEs. There are a few shortcuts a player can take to make this process less painful, but there's no getting around the fact that these aspects of the game lag far, far behind the rest.

Make no mistake, Deadly Premonition lives and dies by the strength of its story and characters. While it may sound strange to say so, this was one case where gameplay (as is commonly thought of) takes a backseat to the strength of the tale and its atmosphere. Players who don't care for its particular, peculiar style will have difficulty finding any redeeming value. However, for those (like me) who manage to ignore the technical shortcomings and can appreciate what the game has to say, Deadly Premonition will be an unforgettable experience well worth the investment. Rating: 7.5 out of 10.

Disclosures: This game was obtained via retail store and reviewed on the Xbox 360. Approximately 16 hours of play were devoted to the single-player mode, and the game was completed. There are no multiplayer modes.

Parents: According to the ESRB, this game contains blood, intense violence, partial nudity, and suggestive themes. The crimes in the game are the violent murders of young women; some of them have also been sexually assaulted. Many of the in-game deaths are quite gruesome. One character extensively describes physical abuse he suffered as a child. York smokes regularly and several characters consume alcohol in the course of the game.

Deaf & Hard of Hearing: All dialogue is subtitled, but sound cues are very helpful in alerting the player to the presence of enemies. The difficulty of the combat segments will be increased for those who are hard of hearing.

Brad thank you for recommending this game! I finished it last night and like you said in your review i believe this is an unforgettable experience in videogaming. It’s very rare for me to put a game’s story and characters ahead of the gameplay. After all a game’s primary “weapon” is gameplay. It’s very rare that i find a game that warrants it. DP was such a game. As far as the score the game it receives i completely agree as DP is greatly lacking in some important aspects. However, my only concern is that many people will be put… Read more »

Sweet. You comprehended and answered my question, perfectly! So, thanks!

And yeah, I am familiar with the site and how it works. I forget when and how I stumbled across this site, but I do think you guys analyze games the way the should be analyzed (by actually making a serious attempt to analyze them). So, know that your hard work, effort, and enthusiasm are all appreciated!

Hey Pwned, Thanks for your comment. Based on what you wrote, it sounds like you have an extremely clear awareness of how this site works, and it makes me quite happy. ^_^ Like you mentioned, the text of the review is the most pertinent part. If I’m reading your comments correctly, I assume you mean that the text was more “positive sounding” than a score of 7.5, and so now you’re not sure if you are correctly interpreting my write-up? The way it breaks down (for me, anyway) is that the text of the review is exactly how I feel… Read more »

I completely understand that Gamecritics uses a review scale in which “5” is average rather than “7”, and I am also aware that Gamecritics is of the opinion that review scores don’t matter as much as the content of the reviews. In fact, I like both of these things about this site. However, given the praise heeped upon Deadly Premonition’s story and story-telling techniques (and the supposed importance of this over and above its gameplay failures), I’m still a little puzzled by the score of “7.5”. Is this score due to the fact that those “…who don’t care for its… Read more »