It's what entomologists dream about 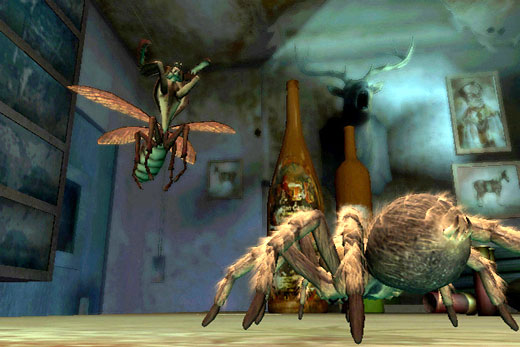 HIGH One of the few titles that explores the untapped insect kingdom.

WTF No multiplayer fight mode? The game screams for it.

To the gamer like myself who craves new, innovative, and offbeat experiences, the Wii hasn't been an especially welcoming environment lately. There have been a few notables on WiiWare, but if not for those small downloaded titles, I wouldn't be able to recall the last time I waggled a Wiimote with sincere enthusiasm. A lone bright spot in an otherwise drab sea of releases, Deadly Creatures from Rainbow Studios has changed that.

An intellectually unconventional, interesting game, Deadly Creatures places players in dual roles; each level in the game alternates between a tarantula and a scorpion. The two desert dwellers are enemies of a sort, and their pursuit of each other takes place while a darkly comic tale of two men and their search for buried treasure unfolds in the background.

To Rainbow's credit, their approach towards the arachnids and their place in the world is probably about as realistic as a developer could go without completely failing to provide an acceptable level of gameplay. After all, a scorpion spends most of his day hiding under a rock, and I doubt many players would sit through something like that.

In general, the tarantula segments feature platform-style level navigation thanks to a zippy web line that shoots it from place to place. It also has a venomous bite, and can perform a leaping stealth attack from a great distance away. The scorpion is more of a tank. Although it can scale surfaces, its levels are more about eliminating enemy bugs and using quick-time events to deal out the kind of lethal finishing combos that would make an entomologist swoon.

One of the things I liked best about Deadly Creatures was that it was so moody and atmospheric. The artists have done a great job using color palettes and lighting to set the tone, and the game's camera is placed almost directly behind the spider or scorpion. With such a low viewpoint, the feeling of disorientation when scaling vertical services and the sense of size when crawling over recognizable objects like shoes or a garden gnome are clear victories. In one particularly memorable scene, seeing the tarantula scale the steps of a child's discarded doll house gave me the shivers. These animals may be as close as the nearest desert, but the game's ability to keep the player at a distance makes them feel very alien, indeed. 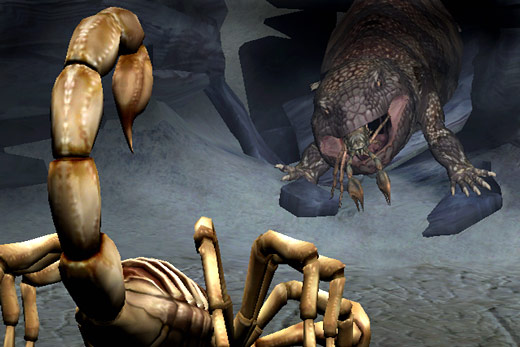 Complementing this approach, the idea of telling a story peripherally was a fantastic one. Mostly expressed through snippets of voice overheard from underground or behind abandoned junk as the scorpion and tarantula pass by, this technique serves to reinforce the feeling that the player is outside and apart from their usual role. However, that's not to say that the game's two stars have no impact—when their actions do intersect with the humans in the game, it's quite clever.

As much as I appreciate the premise and the subject matter (and I really, really do) I'm sad to report that I didn't feel as though Deadly Creatures fully realized its potential. Although the game is relatively short and can be finished in a day or two, there were times that I felt I was pushing through filler. The spider and scorpion spend a little too much time in the desert, and the levels begin to feel too similar, too soon. The tarantula's levels especially began to wear out their welcome towards the end. Although they were a little more active and enjoyable, constantly scanning the environment for places to attach the web line was tiresome thanks to a partially-cooperative camera and the fact that this part of the game design was the most unnatural concession in service to play.

The few "boss" battles that crop up were novel, usually involving an enemy much larger in size or more potent in ability. Unfortunately, there's far too few of them. In a similar vein, I felt as though Deadly Creatures was at its best when the multi-legged cast was juxtaposed against more domestic settings. It's fine to be in the desert and dust, but there's a certain sense of glee to be had escaping from a terrarium, crawling inside the cab of a wrecked pickup, or coming up from a bathroom drain. It's a shame that only the final two levels bring the arachnids and humans into direct contact… I'd love to see a sequel that explored more of this territory while retaining the semi-realistic feel.

Although the bug lover and game critic in me both wanted more, I do want to acknowledge Rainbow Studios for taking a real risk with a game that breaks away so far from the norm, in terms of both subject matter and intellectual design. I give them double credit for doing it on the Wii—to attempt something that so clearly stands out from the piles of waggle-tastic, brightly-colored shovelware was a bold move, indeed. Although Deadly Creatures might not be entirely successful, I would call it a success. Rating: 7.0 out of 10.

Disclosures: This game was obtained via rental and reviewed on the Wii. Approximately seven hours of play were devoted to the single-player mode, and the game was completed 1 time. There are no multiplayer modes.

Parents: According to the ESRB, this game contains Alcohol Reference, Blood, Mild Language, and Violence. Although it's hard for me to say that this is a violent game, I can imagine that it might not be appropriate for younger players. The critters on display are all fairly creepy looking, and some of the scorpion's finishing combos are somewhat graphic, in a Discovery channel sort of way. There is one scene of violence against a person (although it's really in the background) and a tiny bit of gunplay at the end. Keep in mind though, the player only controls a spider and a scorpion, so that really limits the kind of violence that's possible: it's all bug-on-bug. There is no sexual content.

Deaf & Hard of Hearing Gamers: You shouldn't have any problems. All important information is relayed to the player via text on-screen, and there are no significant auditory cues needed during gameplay. The only potential issue I noticed was that certain voiceovers were not subtitled even with the option turned on, although all of the major dialogue portions are captioned.