Raiding tombs, but not a Tomb Raider 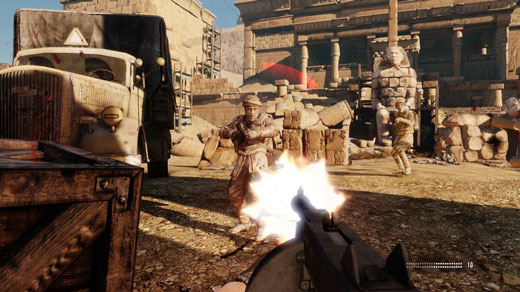 HIGH the first time I came across mummies fighting Nazis.

LOW too much combat in the latter half.

WTF how do the Nazis keep getting ahead of me in locked tombs?

When I was younger, I can remember many lazy days spent watching low-budget movies, and enjoying them for what they were.  It didn't matter how bad a film was-if there was a cool-looking monster or someone that used an interesting weapon, I'd watch the whole thing until credits rolled and then change the channel (by hand, mind you) for the next installment of Kung Fu Theater, Adventure Afternoon or Spooky Saturday.

Now that I'm grown up, I don't have as much free time and I'm more selective in my taste, but I've still got a weakness for movies (and games!) that set a… well, let's say a ‘realistic' goal given their resources. It's from this perspective that I played Deadfall Adventures, and had a good time doing so, because if there was ever a B-movie sort of adventure video game, it would be this one.

Deadfall Adventures stars James Quatermain, descendant of legendary fictional adventurer Allan Quatermain. James is essentially an unlikable douchebag surviving on his family name, and makes a living by being hired on for expeditions.  The game is set just prior to WWII, and our ‘hero' is approached by a woman working for a government agency in pursuit of mystical artifacts.  Of course, the Nazis are after the same items, and…  well, it's not hard to guess how things play out from here.

While this sort of setup might seem inclined towards a third-person scheme, the developers decided to go first-person instead, and I think it works.  To their credit, they smartly avoided large amounts of jumping or platforming, and the amount of shooting to be done is quite restrained in the first half.  The second half doesn't show the same good judgment, and unfortunately, the game suffers for it.

However, things do start off on the right foot. As Quatermain makes his way through Egyptian ruins, hidden temples in the arctic and some classic jungle-flavored action in Guatemala, the developers have incorporated a few elements that emphasize Deadfall's adventurey side.

For example, at any point the hero's free to consult a compass which will lead him in the direction of nearby treasures.  The trinkets are usually hidden or guarded by small puzzles, and collecting enough of these enables Quatermain to enhance his abilities on a small skill tree. None of the skills are vital, but they're appreciated.

When up against puzzles, Quatermain is able to check the diary of his forefathers for the answers.  It certainly calls to mind other franchises which employ a similar element, and it's effective when a pointer or two is needed-although to be fair, most of the puzzles are quite easy. From sliding block puzzles, light-beam puzzles, match the symbol puzzles, pull-the-switch puzzles and more, it's a fair bet that even relatively inexperienced gamers will be familiar with the kinds of riddles these ancients have constructed.

The final element is that the ancient areas Quatermain explores aren't entirely uninhabited.  In addition to goose-stepping Reich soldiers to be taken down, he'll come across undead enemies who can only be harmed after being softened up with a quasi-magical flashlight beam.  These enemies require the player to employ different tactics, so they serve as a nice change of pace between squads of Hitler's goons.

All of these elements come together in levels which are pleasantly linear, and emphasize the game's desire to keep the player moving forward as though it were an action movie.  There are short detours off the main path that hold traps or treasure, but it's clear that the developers want Quatermain to sally forth, relatively undeterred.  In another game this might be a negative, but not here. Deadfall Adventures is keen to deliver that B-movie experience, so players will never stand around for more than a minute or two before making their next move.

While the elements I've described initially come together in exactly the sort of low-budget experience that I'm quite amenable to, there are a couple of crucial things holding it back.  The first is that the voice acting is absolutely awful.

While one might think that corny lines and cheesy delivery are part and parcel of a low-budget outing like Deadfall, there's a difference between actors doing the best they can with the material they've got, and actors who don't even appear to be trying.  The main character's voice is flat and lifeless, completely lacking any of the charm one would expect to see in a roguish hero. In fact, it's really saying something that another actor stumbling through an atrocious German accent comes across as more pleasant.

The voices are bad, but an even bigger crime committed by the casting director is that the game cranks up the combat halfway through, and keeps it unpleasantly high until the end.

It would be extremely generous to describe the shooting mechanics here as ‘fair,' and if I were interested in a game focused on first-person combat, there are about 37,000 others out there that do it better.  Things were fine when the only shooting was when stumbling across a handful of bored Nazis on guard duty, but as the encounters grew longer and longer against more and more troops, the tomb-raiding things that made Deadfall appealing kept getting pushed aside in favor of the thing that didn't.  Play picks up when the campaign goes puzzle-heavy in the last leg, but the developers would have been better off keeping gunplay to a minimum.

I certainly appreciate what Deadfall Adventures was going for and I'm always open to adventuring on a less-than-AAA scale, but the over-reliance on shooting and the abysmal voice acting knock this afternoon-matinee romp down a few pegs.  Even so, I've got a weakness for ancient artifacts, abandoned crypts and globe-trotting action.  If the developers decide to take Quatermain out for another expedition, I wouldn't be entirely opposed to tagging along again. Rating: 5 out of 10

Disclosures: This game was obtained via publisher and reviewed on the Xbox 360. Approximately 9 hours of play were devoted to the single-player mode, and the game was completed. No time was spent in multiplayer modes.

Parents: According to the ESRB, this game contains: blood and violence. I'm a little surprised to see that there were no callouts for language here, since I can recall at least a few instances of mild profanity.  Otherwise, it's standard action-movie stuff-bad guys getting shot, stabbed, and blown up with bundles of dynamite.  None of it is particularly graphic, but it's pretty clear that human beings are going down.  It's probably not for the little ones, but I would imagine that most older kids and teens have seen far worse than this.

Deaf & Hard of Hearing: all dialogue is subtitled, so the story side is accessible.  However, it's worth knowing that the music changes when enemies are in the area, and it changes again when the coast is clear.  It's not crucial information (and the game does provide on-screen damage direction and locators) but there is no visual cue for this rather helpful audio.