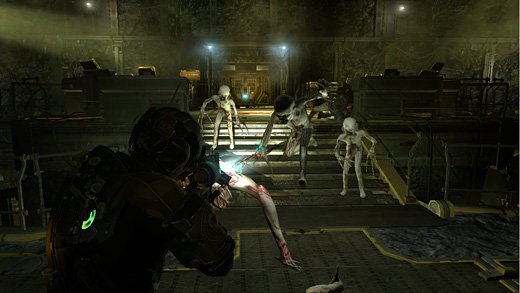 HIGH The second half of the game.

LOW The first half of the game.

WTF Why is there so much filler here?

If there was ever a game that was too long for its own good, it's Dead Space 2

. Although the campaign clocks in at a modest eight hours (quite appropriate for an actioner) there's so much padding and repetition that it absolutely kills the elements that Visceral gets right—and there is good here, to be sure. However, it starts out as such a slog that I actually quit the game twice, and if it wasn't for friends talking me into giving it a third chance, I doubt I would have ever finished it.

Honestly, I want to like the Dead Space series. The production values are as sharp as anything out there, I like sci-fi titles in general, and I'm a sucker for cool-looking armor. I'm also a fan of the idea that protagonist Isaac Clarke is an engineer with psychological problems. It's a premise rich with potential, and I was halfway on board before ever turning my console on.

Unfortunately, the first Dead Space and its sequel have the exact same problem—not enough quality content to justify their running times. It's too bad, because if all of the random hallways and look-alike rooms were removed, both games would be greatly improved; Dead Space 2 especially so.

Once I was motivated enough to push past the painfully boring first half, I was pleased to discover a number of interesting scenarios that helped freshen things up. There were frequent zero-G rooms for Isaac to fly around in, a section where he's working against an antagonistic AI, a few clever puzzles, and more welcome instances of things to be fixed. Isaac is an engineer, after all. If these sequences (and others like them) had been sprinkled throughout the entire adventure, it wouldn't have taken me three attempts to get through it.

Another thing that makes the second half stronger is that Isaac has more dialogue, and his story is related to the player with greater frequency. I understand that feelings of loneliness and isolation can contribute to a heightened feeling of fear, but the case of Dead Space 2, it just keeps the player at a distance. Without establishing a strong connection from the start, there's little weight or significance to the first few hours. It isn't until a sympathetic character shows up and Isaac goes through some psychological revelations that things start to solidify.

Interestingly, the best part of the entire Dead Space 2 experience was its add-on downloadable content (DLC), Severed. What made this particular content stronger than the main game was that the character's motivation is clearly established immediately, cut-scenes and dialogue pop up frequently to keep things moving, the action is ramped high with less reliance on a "scary" horror vibe, and… it's short. It starts, it wastes no time doing what it needs to do, and then it's over. It was also great to re-visit some of the areas that Isaac had been through, and to see them in a slightly different way.

By the time I rolled credits, my opinion of Dead Space 2

had definitely changed. Thanks to the tighter, more interesting second half, I walked away thinking that it was almost a very good game that's unwisely bogged down with flabby filler—too many predictable jump scares, too many behind-the-back attacks, too many poorly-disguised hallways, and it definitely takes too long to be able to re-spec weapons. Isaac Clarke's second outing could have been fantastic with the fat trimmed away, but it's still worth a look-see—just hunker down and push past the first half. Rating: 6.0 out of 10.


Disclosures: This game was obtained via retail store and reviewed on the Xbox 360. Approximately eight hours of play were devoted to the single-player mode, and the game was completed. No time was spent in multiplayer modes.