This Corpse Needs a Little Freshening Up 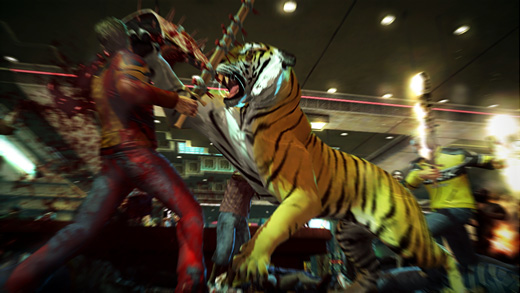 HIGH Watching all the cut-scenes with my character in a snappy tuxedo.

LOW Trying to mix life-giving drinks at a bar while getting mobbed by zombies.

WTF The amount of stuff lifted straight out of the first Dead Rising.

While there's no doubt that the original Dead Rising had a wealth of wrinkles that needed ironing, it was a fresh concept tailor-made for fans of horror and the undead. It was doubly impressive for breaking away from the all-pervasive Resident Evil mold dominating design at the time. While I would describe my relationship with that title as one made of equal parts love and hate, overall it remains one of the most noteworthy and memorable experiences I've had on the 360.

Unfortunately, I can't say the same about its sequel, Dead Rising 2

Starring ex-motocross champion Chuck Greene, Dead Rising 2 takes place in Fortune City, a fictional Vegas clone. Chuck is in town to slaughter captive zombies on a game show for cash. The reason? His daughter's been infected by a zombie bite and requires frequent doses of expensive medication to remain human. At the end of the competition, the caged fodder zombies somehow escape, and Chuck is blamed for the disaster that follows. Dead Rising 2 finds our hero trying to accomplish three things: keeping his daughter medicated, rescuing any survivors, and clearing his name of any wrongdoing.

On its most basic level, I think that Dead Rising 2's third-person zombie-killing is an inherently good game, but it has two major problems. The first is that it seems more like a do-over of the first title rather than a true sequel, lacking freshness and its own identity. The second issue is that the game's only original feature, the much-hyped "create-a-weapon" system, seems at odds with how the gameplay actually flows.

Speaking first about its retread status, I certainly concede that as a sequel it's only natural that it would have much in common with the source material. However, the number of parallels is taken to an unreal level, both in terms of concept and content. Quite frankly, huge chunks of Dead Rising 2 feel directly lifted from its predecessor, and a powerful feeling of déjà vu hung over the title from start to finish. 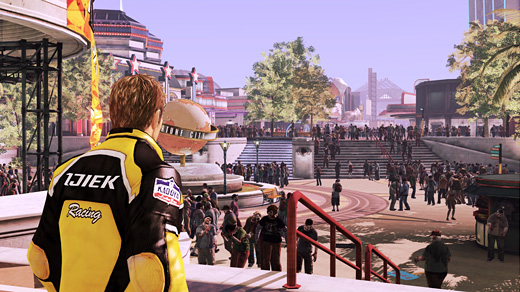 These are just a few examples, but I could certainly go on. The fact is that Dead Rising 2 is essentially a note-for-note reproduction of the original with just a few tweaks; things like offering three save files instead of just one, much-improved AI for NPCs, and an overall difficulty that's greatly reduced. The developers have clearly listened to player feedback and these shifts are absolutely positive. That said, what's offered here feels blatantly recycled and lacking inspiration—it's more like a rebalanced version of the first Dead Rising than something that stands on its own.

The second issue is the "create-a-weapon" mechanic. Chuck can take seemingly disparate items found in the environment and combine them to make strong instruments of destruction. For example, mix a handful of bottle rockets together with a lead pipe, and Chuck's got a (literal) Rocket Launcher. The devastating Knife Gloves are crafted from scavenged blades and boxing gloves, and so on. While this is an interesting idea and there are tons of combos, I can't help but feel that the developers didn't really think things through. Rather than a fully integrated part of play, this system feels artificially grafted on top of the previous formula. 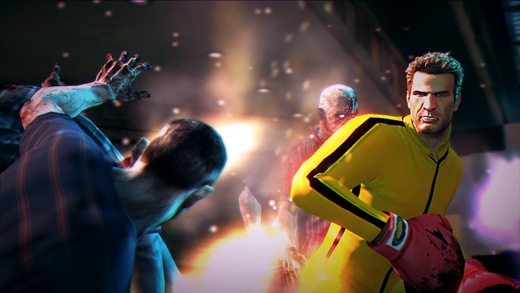 To start with, the player has an extremely tight inventory limit at the beginning of the game, and it takes quite a while before Chuck has pockets big enough to make holding potentially useful gear worthwhile. Next, the weapons break. It's great to find junk and combine it into something that slaughters undead, but it's a drag to re-collect components when the cutter or shooter or shocker falls apart. After a few rounds of experimentation, I usually stuck to the same few pieces of easily-grabbed material and went about my business. Why put out effort for something that's just going to bust in a few minutes?

Finally, the issue of time. Despite more generous deadlines for completing missions, Dead Rising 2 is still about keeping on schedule. There are occasional windows of "free time" to be spent at a player's discretion, but having several missions competing for attention simultaneously is more the norm. Waste a few minutes too many, and a player might find themselves having to restart the game thanks to a missed objective.

It can be said that the game is made for players to start over, but it doesn't seem like a fair or enjoyable trade-off that a person should be willing to go back to square one of the story mode as a result of experimenting with and enjoying the item-crafting. If the components Chuck found were kept (and respawned) at home base, or if the weapons he jury-rigged were permanent, it would make the risk/reward of losing time more legitimate. In its current state, it just doesn't feel like the pieces of this system fit together or make very much sense.

All things considered, I had a much better experience with Dead Rising 2

's prologue Case Zero (a $5 DLC episode) than I did with the full game. The setting of Case Zero didn't feel like another mall, the area to travel was much smaller and more compact, and while the core concept was essentially the same, it felt different enough to keep my attention from start to finish.

I don't think that the future of Dead Rising must lie in episodic DLC like Case Zero, but if Capcom and Blue Castle were to move ahead with a Dead Rising 3, they're really going to have to seriously rethink the formula and retool the thing from top to bottom. There's tons of potential in this franchise, and it would be an absolute shame to turn out another minor-upgrade, odd-fitting iteration like this one. Rating: 6.0 out of 10.

Parents: According to the ESRB, this game contains blood and gore, use of alcohol, intense violence, language, and sexual themes. As you may have guessed by the numerous call-outs, it's safe to say that this game is absolutely not for children under any circumstances. There are several extremely gory death sequences for zombies, and some of the cut-scenes will be much too intense for younger ones. Alcohol is scattered throughout the game and is used to create some of the most valuable life-ups, there are a handful of situations that can be seen as a bit risqué. These elements make a great horror experience, but let me say again: no kids allowed.

Deaf & Hard of Hearing: Players with hearing issues should be aware that there are several times when the only way to locate a Survivor is by audio cues. I would have been completely unaware of several people in need of help if I hadn't been able to hear their cries. The same goes for certain bosses—it's easy to be caught off guard by an enemy approaching with only audio for a warning. Capcom and Blue Castle should definitely have included visual cues for these elements. Apart from those problems, the spoken dialogue during cut scenes is subtitled (and in a much larger font this time!). It's playable, but this lack of accessibility may present real problems at times.