Duct Tape and a Camera 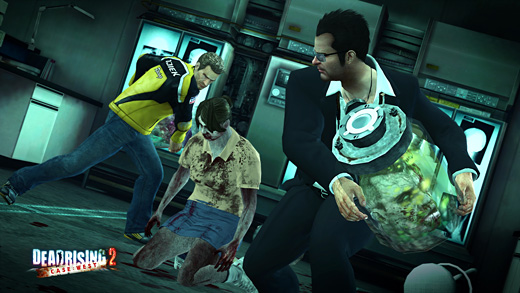 HIGH Frank West. What else needs to be said?

LOW A few of the Achievements are too tedious to bother with.

WTF It's a locked facility and I've killed thousands… When does the place empty out?

After finishing all three of the recent Dead Rising installments, I find it fascinating (and more than a little telling) that the DLC standalones were better experiences than the full-sized sequel they were meant to tie into. The zombie-killing, item-scavenging, time-management formula felt stale and needlessly drawn out in Dead Rising 2 proper, but comes off as a much better fit for a three-to-five hour chunk like Case West

. I definitely enjoyed the small-scale action here, and while I don't think we are in complete disagreement, I have a slightly more appreciative view of it than Mike did in his main review.

One issue we part ways on is the setting: a zombie-processing factory. While I initially found it to be a little hard to navigate, once I had spent some time in the facility, I appreciated that Blue Castle wisely chose (again) to set the action away from a mall. In fact, I think the architecture itself helps to elaborate on some of the fiction in the game. For example, it wasn't hard to imagine large trucks backing up and dumping loads of zombies into the holding area, and seeing how the undead would be channeled down chutes like cattle for slaughter helped paint a more realized picture of the game's world.

Along the same lines, I appreciated the diversity in enemies. Although Mike is quite right in saying that there are still loads and loads of zombies to wade through, there are also a number of still-breathing security personnel to be dealt with. Their specialized weapons and gear enhance the illusion of being in a place meant to harvest the undead, and their presence added a bit of spice to the proceedings.

Although it doesn't vary much from the core gameplay seen in the other Dead Rising titles, I definitely felt as though there were enough tweaks, additions and changes to make Case West worth my while. Besides what I've already mentioned, I loved that Survivors didn't need to be escorted anywhere, the easier-to-access weapon combinations meant that I used laser swords and football grenades more often, and as a legitimate continuation of the storyline, I was interested to see what would happen, plot-wise. However, although Blue Castle has done a fairly seamless job of taking over the development reins from Capcom, there are still plenty of things that could've been done better.

By far, my biggest irritation with Case West was one of the issues that Mike called out: Frank West is an unplayable character unless a friend jumps in for a co-op game. As a fan-favorite and one of the biggest reasons to purchase this DLC in the first place, it's absolutely mind-boggling to me that a person playing by themselves isn't given a choice between Frank and Chuck. I'm no developer, but it seems to me that it would've taken very little effort, and there's no plot-based reason that Frank couldn't have been the star of the show.

Other irritants? In every Dead Rising game, a large part of play is finding people to rescue and bringing them back to safety. Although the area of play in Case West is quite small, a couple of the people in need felt a little too random to find without an FAQ.  Another example is the picture-taking feature removed in Dead Rising 2. Now restored, (Frank is a photojournalist, remember) this function felt poorly-implemented and tossed in without much consideration. In fact, I didn't realize the camera function was even there until I was more than halfway through my first run.

However, while those things were certainly issues, none of them were as big or as annoying as the fact that the game consistently kicked my co-op partner out whenever I saved. I have no idea how Blue Castle could have missed the consistency with which players get booted, and a quick online search confirmed that plenty of other people have encountered this problem as well. For a game that touts the cooperative mode as much as Case West does, it's absurd that an issue like this made it through quality testing.

Despite those problems, I still have no qualms saying that Dead Rising 2: Case West

was an enjoyable romp. It's fast-paced enough to avoid the monotony of Dead Rising 2, it offers a new, interesting environment in which to cope with rotten mobs, and of course, it was great to see Frank make his return to the series—even if it was in mostly-unplayable fashion. Quite honestly, I could see myself springing for more downloadable entries like this, as long as they were equally concise. When it comes to the adventures of Frank and Chuck, I'm definitely of the mind that less is more. Rating: 7.0 out of 10.

Parents: According to the ESRB, this game contains blood and gore, intense violence, language, and sexual themes. Parents will want to take heed of the Mature rating on Dead Rising 2: Case West as this isn't really a game for the little ones. Being attacked by zombies is an intense experience that could scar little Johnny for life and the catharsis that's gained by wading into a sea of the undead with a chainsaw might be too much for younger gamers to handle. Plus, I think we're all traumatized by the site of Frank and Chuck in some of the game's more outrageous costumes…

Deaf & Hard of Hearing: Main story scenes feature subtitles, but hearing impaired gamers will miss out on the aural cues in the environment. Survivors call out for aid, meaning you'll hear them long before you see them- the result is that a big portion of the game will be difficult to manage for our deaf and hard of hearing friends. This continues with the enemies-particularly the guards-who are often found in the sea of zombies by the player honing in on their chatter rather than through plain sight. The game isn't unplayable for the hearing impaired, but it will be more challenging than it would be for someone who can hear.