My most recent review of Platinum Games' Vanquish went live. (If you're too busy to click, then just know that I loved it.)

After an extended delay, I finally got my hands on a copy of Dead Rising 2. I had a fairly hot-and-cold relationship with the first one, but the recent Case Zero DLC episode got me fired up and I've been pretty eager to see what's going on with Chuck Greene in Fortune City.

Unfortunately, it's not really all that much.

At this point I'm probably a little over halfway through the game, maybe two thirds, and I've got to say that it hasn't lived up to expectations. Don't get me wrong, I'm not saying that's a bad game by any means, but I guess I'm just surprised at how much it seems like a complete "do-over" of Dead Rising rather than being its own experience. There's just so much of Dead Rising 2 that comes off as a xerox of what former protag Frank West went through.

For example, the player's home base is another security office inside the service area of a mall. Inside that office is another person with a radio who zaps the player with new missions at regular intervals. Then there's the mall itself, which is almost exactly like the environment from the first game, complete with a wealth of shops, a small "outdoor" area, and an underground tunnel choked thick with the undead. It's all the same. If you want to go further and break things down on a smaller scale, there are dozens of similarities that seem lifted part-and-parcel from the original.

The gameplay formula is nearly identical, as well. Hike back and forth rescuing survivors while waiting for the "core" missions to appear and further the plot.

Again, there's nothing wrong with it, it's just that it feels so incredibly similar to the first game. The flow hasn't changed. The situations haven't changed. At this point in my playthrough, I haven't found any particularly original encounters or anything that's been significantly dramatic. Even the Psychopaths (the equivalent of boss fights) feel like do-overs. The Motocross boss in the central area… the crazed chef and his meat locker… Haven't we seen iterations of these guys before? There's no freshness to any of it. 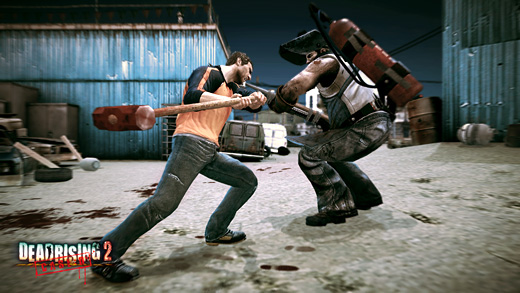 The most notable differences: There are now three save slots instead of one, and that the game in general feels much, much easier. The Psychopath fights have been toned down in difficulty quite a bit, and making your way through hordes of zombies requires nearly no effort at all. The time limits for each mission are extremely generous (so far I've been able to complete every single one, both story and optional) and the survivors Chuck rescues are finally able to hold their own and survive long enough to make it back to the safe house. Hallelujah.

Now, all of these changes are absolutely for the better, but they're all just corrections to things that were relatively broken the first time around. This isn't new ground Capcom is covering in Dead Rising 2, it's a bunch of fixes… a bug patch on an epic scale.

Oddly enough, the only legitimately "new" thing is the way Chuck can combine items to create new weapons, but I have to say that this hook falls flat. Since weapons break quite frequently, it's a hassle to go out of your way to find some of the more exotic components, not to mention that time is still a concern, even with the more generous mission limits. Add in the fact that inventory space is extremely tight until much later in the game (a life-up, or a useless piece of a weapon to be lugged around? easy choice.) and what's left is a gimmicky add-on that doesn't really fit with Dead Rising's core identity. Rather than experimenting with combinations, I find myself sticking with the nailbat (which can be created immediately outside of Chuck's base) and ignoring everything else. There's just no good incentive to do otherwise.

I haven't tried any of the multiplayer modes and I intend to do so, but at this point I have to say that I'm quite disappointed in the singleplayer campaign. Although my opinion may change, everything I've seen so far points to Dead Rising 2 and being a near-identical, more polished version of Dead Rising 1. As much as I may enjoy the subject matter, I definitely expected more.

Everybody and their brother has probably seen this by now, but just in case you haven't… Some hard-core Sonic fans have put together a labor of love remix, and it looks a hell of a lot better than what Sega just released for $15.

A new psychology website got in touch with me and requested that I post this. I can't personally vouch for the validity of the claims made at this site, but if this stuff is even halfway true, then it constitutes some interesting food for thought. Basically, these various authors are saying that games are not only not nearly as harmful as some in the media would like us to believe, but there are actually several different types of benefits. Take a look and see what you think.

I bought Vanquish on your recommendation, Brad, and I am happy to report I love it as well. I’m playing through Dead Rising 2 as a gamer who never played more than 20 minutes of the first Dead Rising. I remember my limited experience with it left me unimpressed – I distinctly recall feeling that the controls were a bit too clunky. The sequel, on the other hand, has been an absolute blast for me. I agree with your remarks on the inventory problem – until I had 5+ inventory slots, I didn’t carry non-weapon combo items around at all.… Read more »

I feel the same way about the weapons in this series. It’s annoying to find something really cool only to have it break after you wipe out fifty zombies. Honestly, in Dead Rising 3 they could leave everything pretty much the way it is now mechanics-wise, but add unbreakable weapons, and I’d be happy.

Hello, I’ve just finished the game and I agree with you, it’s a remake of the first. I wonder why (other than the obvious “work less earn the same”) Capcom chose to do so. Maybe they wanted to introduce the serie to PS3 and PC owners too, and are keeping the more interesting content for DLCs (Case Zero and the upcoming Case West). Since the DLCs will be 360 exclusives, maybe this is also a move to bait PS3 and PC owners in buying a 360? Just speculations. Anyway, I’d say to give the game a chance. You complain that… Read more »