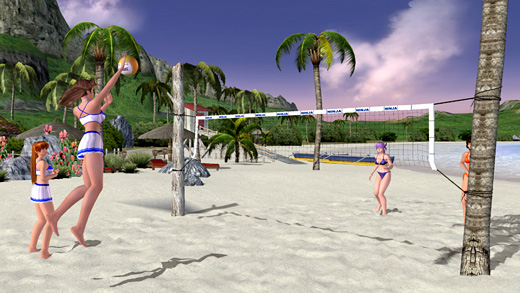 Sex is something of an enigma for this country. Everyone wants it, everyone thinks about it, but almost nobody wants to deal with it in a meaningful and intelligent way. This is especially true for videogames and their delayed acceptance as culturally valid media. While there are several factors that can be cited as holding back progress on this front, one of the most common would be habitually pandering to lowest common denominators. Game developers have generally been either unwilling or unable to deal with certain issues on a mature or sophisticated level, with scant few exceptions. How can we expect people to take games seriously if the industry is constantly setting inappropriate examples? This conundrum directly feeds into another issue that often raises its head in this situation; the perception that anyone wanting to explore the concept of sex in videogames must be some kind of socially inept deviant.

These are significant problems, and must be addressed before any elements of sexuality and relationships can make serious headway. I believe this subject is the most underdeveloped segment of videogame culture today, and the time for it to start growing up is now. While girls in tiny swimsuits may be nice to look at (and it certainly sells games) we've already seen that showcasing displays of anatomy without anything backing it up won't get us very far in the long run.

Despite being labeled as a volleyball game with massive amounts of female eye candy, Dead Or Alive: Xtreme Beach Volleyball seemed to be positioning itself as more of a hybrid than a sports title to anyone paying attention. Talk of its peripheral content garnered much attention with elements like gift giving, building relationships with teammates to improve play and learning their personality traits. There was also much talk of several features like a trimmed-down fighting engine taken from the regular Dead Or Alive series, opportunities for character interaction and a host of other things not directly associated with volleyball. Viewed as a whole, Xtreme Beach Volleyball was in place to be a potential Trojan horse stuffed full of new ideas and gameplay. Unfortunately, the project completely missed the opportunity to become a trendsetter or milestone in gaming. Instead, Team Ninja was content to release something as insubstantial, vacuous and shallow as a Sports Illustrated swimsuit issue with the text ripped out.

Looking at what the final version of the game actually offers, many of the proposed features have been cut or never implemented in the first place, leaving Xtreme Beach Volleyball to remind me of nothing so much as a glass half-empty. The disc's main feature is the 2-on-2 beach volleyball game, but also has a virtual casino, three shops with various goods for sale, one small mini-game, and unlimited opportunities to look at well-crafted female bodies. It's not a lot. Obviously Tecmo is counting on entrancing its audience with the female characters, but once the powerful stun effect wears off, it's hard to ignore the game's extremely thin and unsatisfying nature.

Before going any further, let me just get the most obvious part of the game out of the way. The girls look great. They're completely amazing. I'd even go so far as to say "totally mouth-watering" and hope that I don't offend anyone. Always the strength of the Dead Or Alive fighting series, the eight women on display (and I definitely mean on display) are the most intense sources of sexual magnetism ever seen on a console. Team Ninja certainly wasn't shy about giving players the chance to ogle, either. During just about every second of the game, it's possible to zoom in with the game's camera and examine the girls. You can also buy dozens of different swimsuits, each skimpier than the last. Taking your character to empty beaches or deserted forest clearings will earn you short routines of slinking, rolling, wiggling, dancing, running, posing and even doing push-ups for your gratification. While the viewpoint can be moved around to a great degree, complete control over the perspective has not been granted. Still, the choice of angles and zoom are more than enough for several eyefuls. 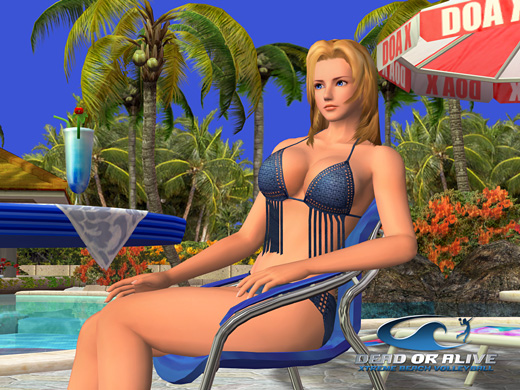 Once past the main attraction, the volleyball itself is limited but satisfying. I'll freely admit that I know next to nothing about the official sport. But, with sand, a net, and a ball, all the elements appear to be in place. The mechanics of play are quite simple, using only two buttons for bumping, setting, and spiking. The game's AI and auto-positioning handles most everything else, so getting the hang of play is simple. I did have some quibbles with the camera since it often keeps your character out of view, though. It's not terrible, but I would sometimes be unaware that my character (off-screen) was moving in for a spike until it was too late to hit the button. Regardless, the action flows well, it takes only a minute to learn and provides more enjoyment than you'd expect.

Unfortunately, the rest of the game doesn't seem as well-developed or amply-endowed as its stars. For example, I was stunned to find that there was only one action-based mini-game on the entire disc, the point being to hop your character across a string of floating cushions in a swimming pool. It's not even a real game, but more a way to acclimate players to using proper pressure on the Xbox controller's analog buttons. It's not much fun unless you count watching the girls jiggle as they jump up and down. Besides cushion-jumping, there's a virtual casino where you can partake in Poker, Blackjack, Roulette, and Slots. But, it's hardly the sort of thing to keep a player interested for long. These are the same sort of menu-based games available from countless other sources, not even taking advantage of the Xbox's hardware with any fancy graphics or effects. The casino might be a quick way of earning money if your luck is good, but it's quite dry and uninvolving, much like the game's final draw—the relationships.

This area in particular is what had me so interested in Xtreme Beach Volleyball, and I was utterly disappointed at how the concept actually came to fruition. There have been a tiny number of domestically-released RPGs that have implemented relationship-building and management as themes (most notably Thousand Arms for the PlayStation), but we have yet to receive something meatier. Despite what the PR department would have us believe, this game isn't it. With only the most rudimentary and unconvincing system in place, it's more annoying than engaging.

The premise was that you "get to know" your teammates' likes, dislikes and personality too become a closer, more efficient team. It sounds terrific in theory, but in practice it only involves giving certain types of items to make them "like" you enough to be your teammate. However, there's no face-to-face interaction, no communication between characters outside of throwaway comments like "thanks" or "I love this!" Additionally, the only real source for learning the other girls' preferences is the game's manual or randomly through trial and error. Without any opportunity for Q&A between all the T&A, the system is reduced to simple cause-and-effect, completely transparent in nature and without any level of believability. It doesn't help that it all takes place through a series of menus, and at no point in the entire game do any two characters appear on screen at the same time except when playing volleyball. In effect, the girls are reduced to being sexually objectified robots, stripped away of human emotion, behavior and personality.

There are a number of other design shortcomings that drag the game down such as no character-specific endings, no tournament mode or goals playing volleyball, no win tallies or success rate percentages, no way to pool purchased swimsuits and items into one inventory, a tiny number of areas to play volleyball in, no "world" outside of the menus and volleyball courts, no way to interact with other characters besides giving gifts, and the publicized Dennis Rodman voiceovers amount to a whole lot of nothing in the opening and closing CG clips. The disc is content-poor and feels like half a game in every way. No amount of well-tanned seduction can make up for that.

Xtreme Beach Volleyball is a shallow, empty-calorie indulgence without much to keep anyone occupied for long. Don't misunderstand me—I don't object to admiring the female form, nor am I any sort of sexual prude or conservative. The amount of flesh shown here is not something I'm against, and I'll happily go on record as saying such. However, flesh for flesh's sake is not something I support, nor is it good for videogames in general. Without marrying any substantial content or meaningful context to the visuals, this is the type of depth-free cheap titillation that we need to move past if we're ever to break away from the stereotypical gutter that society at large perceives current videogames to be in. Rating: 4.5 out of 10.

Parents should be aware of the game's extremely high cheesecake factor. Some of the swimsuits available are little more than thread and beads held together by some magical force, so if jiggling girls in bikinis are not something your kids are ready for, stay away. Besides a multitude of suggestive poses, there is no actual sexual activity. There is also no questionable language.

Volleyball fans will probably want to avoid the game. The lack of official rules, stats or play modes seriously undercuts any competitive elements, and there's really not a lot to it. Interestingly, nowhere in the game's lengthy intro is even one scene of volleyball, giving further credence to the idea that it was never the game's focus.

Fans of beautiful semi-nude women (and who isn't?) will be in heaven. All eight of the characters are impossibly flawless examples of the female form. And, with the option to dress, accessorize and examine them to your heart's content, this game is a voyeur's paradise.

Deaf and Hard of Hearing gamers will have no problems at all. Voices are delivered in Japanese with the option of having either Japanese or English subtitles, so everything's accessible. There are no significant auditory cues.