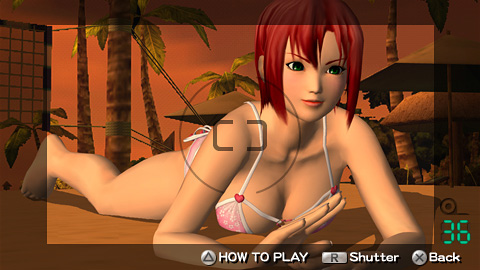 HIGH The volleyball's not horrible.

WTF All this emphasis on skin, and you can't zoom in any further?

What do the above words represent? That string of nouns is a shot-by-shot recounting of Dead or Alive: Paradise's opening cinematic. More effective than anything I could come up with myself, this description lets players know exactly the kind of experience they're getting, right from the opening moments.

Factually, Dead or Alive: Paradise is essentially a "game" where the point is to ogle virtual women in skimpy outfits between other "activities." It's true that there's some lightweight volleyball available, along with casino pastimes like Poker and Slots. It's also true that players can buy gifts for the women on fictional Zack Island (for the purpose of "building camaraderie" with v-ball partners) but to spend more than a moment on any of those aspects would be giving them too much credit.

No, the truth is that this game is all about amply-endowed women striking suggestive poses while the player watches and takes photos. Although this might sound like red-blooded American entertainment on its surface, Dead or Alive: Paradise is a shallow, empty-calorie indulgence without enough substance to keep anyone's attention for more than an hour at best. (And really, that's stretching it.) There's just no game here. Players will be able to see all that Paradise has to offer within the first fifteen minutes or so, and everything that comes after is just deadly-dull repetition.

For example, the volleyball only uses two buttons and can be learned in less than a minute. It possesses no real depth or technique. There is no impetus to practice, or to get better since there's nothing to work towards. Furthermore, the camera often keeps your character out of view and it can be difficult to gauge depth of field, resulting in some unnecessary misses. It's not terrible, but it's hardly more than a pointless minigame.

The relationship-building with teammates is a joke. Ostensibly, players are supposed to learn likes and dislikes of potential teammates, but in practice it only involves giving certain items to make them "like" you enough to partner up.  There's no face-to-face interaction or communication between characters outside of one-line rejections (or the rare approval) and the only source for learning the girls' preferences is trial and error. When a teammate I had been getting along with suddenly decided she didn't like me anymore, I had no idea why, and had no success in reconnecting with her. Thanks to the obtuse and artificial friendship system, I spent several in-game days without a teammate, wasting time and unable to get things back on track. Compelling stuff, this is not.

There are a number of other design shortcomings that drag the game down further, such as a lack of character-specific endings, the absence of a tournament mode or goals when playing volleyball, no win tallies or success rate percentages, no "world" outside Paradise's menu screens, no way to interact with characters besides giving gifts, and for a game that's all about letting players ogle the female body, it doesn't look particularly realistic (the breast physics are a bad joke) nor can the camera even zoom in to a decent degree! No matter which aspect is touched on, I absolutely fail to see the point of Dead or Alive: Paradise.

Don't misunderstand me—I don't object to the female form, nor am I a prude or conservative. The amount of virtual flesh on display is not something I'm against, and I'll happily go on record as saying such. However, flesh for flesh's sake is not something I support, nor is it good for video games in general. Without marrying any substantial content or meaningful context whatsoever to the visuals, this is the type of cheap titillation that only serves to reinforce the sex and/or violence gutter that Fox News and Roger Ebert perceive games to be in. No thanks. Rating: 1.0 out of 10.

Disclosures: This game was obtained via publisher and reviewed on the PSP. Approximately 2.5 hours of play were devoted to the single-player mode, and the game was completed. There are no multiplayer modes.

Parents: According to the ESRB, this game contains partial nudity, sexual themes, simulated gambling. It has been rated "M" for Mature players. It's kind of ironic, since I'd say that there's nothing mature about it, but the rating is appropriate. There is no violence or salty language, but this is certainly not the kind of stuff I would want my children playing. No need to explain—I think the screenshots speak for themselves.

Deaf & Hard of Hearing: You shouldn't have any issues. There is barely any dialogue in the game to start with, and what is there comes with text subtitles. Also, since there's not much "game" in the game, there are definitely not any significant auditory cues needed to play. There are no accessibility barriers here.