LOW All the pre-patch bugs and glitches.

In spite of the famously cinematic trailer that had everyone talking, I held no illusions that the Dead Island

shown represented what players were actually going to get. Instead, I anticipated a Call of Juarez-style mess with zombies, and the early word from fellow reviewers seemed to confirm that. However, upon actually sitting down with the game myself, what I got was Techland delivering the biggest, most complex, most impressive title they've ever created.  Is it perfect? Absolutely not, but Dead Island gets more right than anyone (including me) expected.

As Dan states in his main review, there's no denying Dead Island got off to a miserable start by hitting shelves before it was ready. It didn't just launch in a rough state, it launched broken. As we speak, there's already been a second round of post-release patches which noticeably improve the experience. However, when going through the game myself, I commonly dealt with things like quest markers disappearing at random, quests resetting after completion or being unable to be completed, weapons glitching and disappearing from my inventory, and a host of other issues that should never have made it out the door—and these hiccups occurred after the first round of fixes. I shudder to think what the pre-release reviewers suffered through.

While what I've just described would doom a title to D.O.A. status ninety-nine times out of a hundred, Dead Island beat the odds. It was such a gripping experience that despite all its pre-patch woes, I was never ready to quit. In fact, even after losing over an hour of progress thanks to a save bug (something that's usually an immediate dealbreaker for me) the game's hooks were sunk so deeply that jumping ship and moving on to something else never even entered my mind.

I'm a fan of horror games and zombies, and it's been a constant source of frustration that developers have never simulated the type of survival experience that every zombie movie portrays. There are plenty of games featuring the undead, but the majority are simplistic shooting gallery romps. The few non-shooty exceptions? They don't capture the struggle to endure a world that's been taken over by ghouls. I mean, just look at the closest competition; Left 4 Dead's zombies could easily be swapped out with any other sort of creature and the gameplay would suffer no ill effects, and Dead Rising misses the mark with a cumbersome, esoteric structure and loads of pure silliness. While Dead Island doesn't completely nail every aspect of "true" zombie survival, it comes closer than anything that's been done before.

For me, there's something intensely engaging about huddling in a poorly-constructed shack with a group of howling undead pounding on the doors outside. It's a survivor scene that will be familiar to anyone who's ever watched a zombie film, and it sets the tone of the adventure immediately. The few remaining humans are shattered, fearful wrecks that need help, and the player is the only one who's able to safely brave the hordes of shambling corpses—the only one who can offer a glimmer of hope to people scared that they won't live through the next hour. It's not that the conversations with NPCs were incredibly deep, or that any of the characters were especially memorable… it was more about imagining what I would do and how I would be in such a situation, and taking it from there. 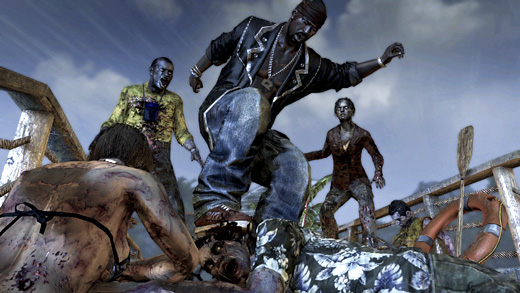 Looking at the game's quests, I've heard some complain that Dead Island's are simplistic and repetitive, but I take issue with that. To begin with, the vast majority are entirely optional, so complaining about something that isn't required seems a bit churlish. Going further, if we can imagine for just a moment that zombies were somehow real, finding lost loved ones, searching for food and ammunition, or putting bullets in the heads of lawless scavengers are all things that would conceivably be common in post-walking-dead life. In my opinion, the quests hew closely with the world they're set in, and I was satisfied.

Honestly, what helps hold it all together is that Dead Island's atmosphere is incredibly immersive. For example, I will never forget the feelings that would flood into me every time I'd round a corner in the town of Moresby and see the church where survivors were taking refuge. The way that house of worship sat upon its hill and rose above the sea of decay surrounding it never failed to inspire awe. Other areas were just as powerful; standing behind the protective chain link fence at the Lighthouse and looking out to sea was gorgeous and infinitely sad at the same time, and the sense of destruction as I picked my way through the rotted remains of a research outpost was incredibly well-realized.

An important thing to note here is that it's not just the quality of the graphics that make the game; Dead Island's environments are surely detailed and realistic, but it's the visuals combined with the intense, oppressive nature of the zombie populace. The undead lurk around every corner, and sprinting across a beach to grab an item or exploring a quiet gas station for provisions can quickly turn into a horrific scene of gore. Naturally, it should be said that death comes for the player often—anyone going into the game can expect to die dozens and dozens of times, if not hundreds. The intense level of lethality serves to drive home the seriousness of the situation, but at the same time, the developers were quite wise to make the penalty for death little more than a loss of cash. If getting taken down was any more punitive, the game would reach soul-crushing levels of demoralization almost immediately. Oh, and while on the subject of cash…

Aside from smoothing out any remaining bugs, the only aspect of Dead Island that stands out as being in need of a fundamental redesign was  the game's handling of money.

Over the course of the game, several characters clearly state that "money isn't worth anything" given the circumstances, so it's an intellectual disconnect to see that searching every nook and cranny for stray dollars is so vitally important—a player who stops grubbing for green out of fatigue or tedium will soon find themselves in a world of hurt thanks to busted, underpowered gear. Patching up a top-level sword after one or two skirmishes can cost over a thousand dollars, so money management plays a key role in the Dead Island experience. Sadly, I fail to see how a stack of greenbacks can fix a cracked machete blade or make a pistol more potent, and this emphasis on maintaining cash flow is doubly puzzling since I had accumulated hundreds of random non-cash pickups (lemon juice, anyone?) that I never, ever used.

Although I think Dan was harsher on the game than I am, he's entirely correct when he says that Dead Island

is just a few fixes away from being game of the year material. Looking back on the hours I spent with it, most of my impressions and feelings were positive and enjoyable. Even now after completion, I'm hard-pressed to find things to complain about once allowances are made for the initial technical problems and the strange decision to invest so heavily in a cash/weapon system. As far as I'm concerned, the developers of Techland have completely redeemed themselves after the last three Call of Juarez titles, and I'm quite eager to see what they do next. Rating: 8.5 out of 10.

Parents: According to the ESRB, this game contains blood and gore, drug reference, intense violence, sexual themes, strong language, use of alcohol. I have no idea how this game got away with just an M rating. Setting aside for a moment the omnipresent beheadings and otherwise excessively brutal corpse dismemberment, let's talk about what the ESB dismisses as "Sexual Themes". This is the first video game I've ever encountered which requires a trigger warning. There are stories about rapes in the past, characters in the game are the victims of rape during the plot, and the threat of rape looms for the entire last act of the game. Questionable storytelling choices bring an unpleasant theme of sexual violence to the game which may be more than most can bear—especially when it's compounded by the fact that—story aside—this was already a game about chopping up bikini girls with a machete. Keep your children far, far, away from it.

Deaf & Hard of Hearing: You will find this thing nearly impossible to play. It's a bizarre thing to see developers who understood the problems of hearing impaired gamers enough to subtitle the story but didn't notice that one of the most fundamental elements of their game (knowing when a zombie is trying to kill you) doesn't work at all when the sound is turned off. The screams of incoming zombies are the only warnings that players receive when they're about to be killed. Directional hit indicators onscreen—so popular in FPSs—not only aren't present, but wouldn't be useful if they were. The fact is, if a zombie ever runs up behind an unaware player—other than in the first hour or two—they're immediately killed. The tragedy of this mistake is that it would have been a simple measure for the developers to fix, but as it stands, the game essentially can't be played by the hearing-impaired.