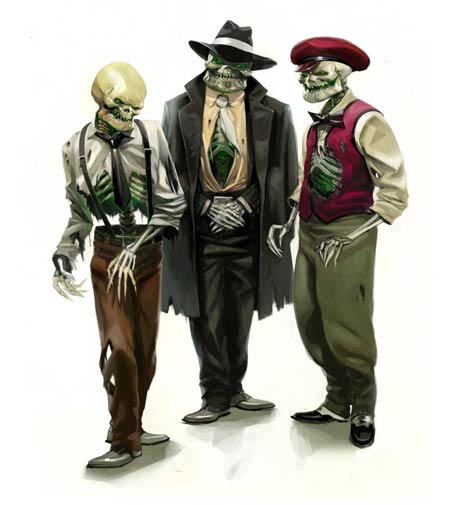 An extremely ambitious title for the underserved PSP, Vicious Cycle's Dead Head Fred is one of those out-of-nowhere efforts that makes a critic like me sit up and pay attention. With a great premise, some very interesting ideas and solid production values, there's a lot to like. Unfortunately, there are also more than a few things to dislike, but despite the missteps in this opening salvo, it's impossible not to see the potential in a sequel, as well as in the creators themselves. With Fred wrapped and the bona-fide surprise smash Puzzle Quest already under their belts, Vicious Cycle is a studio to keep an eye on.

An action-adventure with light platforming elements, Dead Head Fred tasks recently-decapitated detective Fred Neuman with taking down the local crime boss who just happens to run the nearby nuclear power facility. There's a strong noir element running throughout, combined with equal parts horror and absurdist humor. Although the setting isn't as clearly established as I would have liked (little time is ever spent discussing whether toxic waste or the supernatural is the root cause of the town's walking dead and physical deformities) there's no denying that Fred's world has a shadowy personality all its own.

Speaking of personality, Fred himself is voiced by NBC's John C. McGinley, a.k.a. Dr. Perry Cox from the medical comedy Scrubs. McGinley turns in a fine performance, as does the rest of the audio cast. In fact, the script and writing in general are surprisingly plentiful and well-done except for an inexplicable tendency towards unnecessary expletives. Personally, I have no problem with salty language as long as it's appropriate, but the swearing in Dead Head Fred felt excessive and out of place, actually detracting from my enjoyment of the script. I saw no valid reason for it, save perhaps a cheap attempt to score cred with the teen male audience. Fred doesn't need to be this dirty to dial in emotion or to crack jokes, and I hope the writers clean up their act next time. 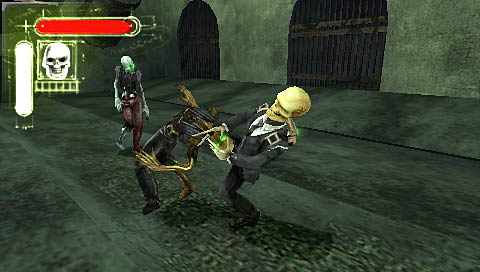 In terms of gameplay, Dead Head Fred treads comfortably familiar ground. Players will explore a variety of different locales while trying to complete various small-scale objectives (find a key, help a person, etc.) while taking out a variety of uglies along the way. In truth, this is pretty standard stuff, but it becomes interesting and engaging thanks to Fred's ability to switch heads.

Revived by a mad scientist in a local castle, Fred's biological head was lost, but his brain and eyeballs were saved in a glass jar filled with green fluid. Although the contents of this jar are all that remains of his real noggin, Fred collects the heads of different enemies, each coming with different attributes and abilities to replace it. Able to be swapped at any time, these heads let the hero do things like climb certain walls, resist fire or radiation, break barriers, or travel underwater. They each come with their own specific attack and have advantages over certain enemies in a paper-rock-scissors fashion. For example, it's possible to counter a crazed farmer's pitchfork strike by equipping the Scarecrow head, and so on.

This MPD twist on the formula is a great concept that I immediately fell in love with, but the frequent flashes of brilliance (like using a grinning mannequin head to approach citizens) are muted by feelings of sameness in the play objectives, lack of reward in the combat, an extended playtime that doesn't feel properly sustained, and a sense that the diversity and function of the heads wasn't fully explored. 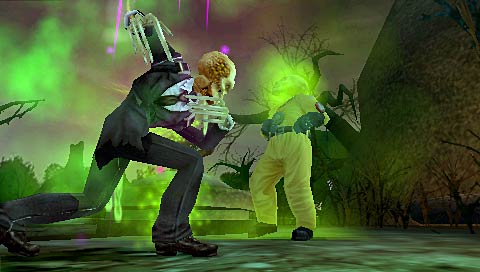 For example, players will kill hundreds of enemies over the course of the adventure, but there's nothing gained except for some dropped items to pawn for cash. I would have liked to see an experience system included and a wider range of attacks to help give the fighting more purpose, especially since there's almost nothing to spend money on. Increased differentiation between powers for each of the heads would have been good, too. I give points for each head having a clearly distinct gait and personality represented through some very nice detail work, but they all feel vaguely similar in combat except for minor differences.

Other areas of Dead Head Fred show a similar lack of finesse, like frequent load times that constantly slow the action and a cumbersome third-person viewpoint set too low to the ground. A clear area map and goal indicator would have been greatly appreciated as well, since the critical path is often obscured through unclear objectives, required objectives disguised as optional sidequests, and being directed to locations that can be hard to suss out. Going further, the opening levels of the game are a near disaster since the tutorial doesn't quite cover the bases, and the first boss is one of the most difficult encounters of the game. Throwing these things at a player who hasn't got a grasp of how Fred works was extremely poor planning, and will likely discourage some from sticking around to see the higher quality of the adventure's later stages.

Although the rough edges I've highlighted would sink most titles, it's entirely to Vicious Cycle's credit that I felt compelled to play through them and walked away from Dead Head Fred with a respect not only for what it accomplished, but for what it tried to accomplish. The foundations for an edgy, darker sort of action game have been properly laid here. Although it might not have be an entirely enjoyable ride from start to finish, there's a definite sense of style and intelligence in the approach. In its current state, Dead Head Fred comes maddeningly close to what could be defined as a genius cult classic. With polish, redefinition, and restructuring, this sardonic flatfoot's next case should be able to hold its own against PSP action stars like Ratchet & Clank or Daxter, and that's no small praise. Rating: 7 out of 10.