According to ESRB, this game contains: Blood and Gore, Intense Violence, Mature Humor and Strong Language 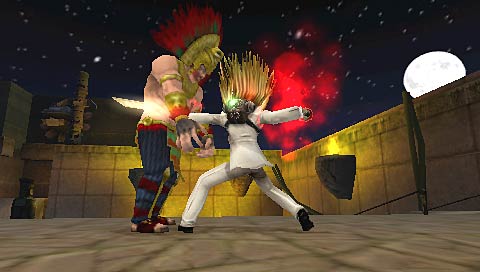 Parents should be well aware that although this game appears like a kooky, kid-friendly adventure, it's actually an extremely mature-oriented title that's not appropriate for children at all. This is one case where the "M" rating is extremely appropriate. There is an excessive amount of profanity throughout, and much of the combat is quite gory. For example, the hero can perform several different "fatalities" on enemies—gushing gouts of blood explode from crushed skulls, and one particularly brutal sequence has Fred turning a farmer's own shotgun backwards underneath his chin before pulling the trigger. The sexual content is nowhere near as explicit as the violence and language, mostly consisting of lightweight references. If I haven't been clear enough in my message, let me say that this is one game that I would not let my own son play—so please use your judgment before letting young ones get their hands on it.

Action-platformer fans should pay attention to this title. Although it has a fair number of problems, there's no denying that this game is on the right track. The action is solid enough (if perhaps repetitive at times) and there are a surprising number of side quests and minigames like the excellent pinball, competent billiards, and unorthodox cockfighting. It's not as polished or as effortlessly smooth as some of the top-tier titles on PSP, but the seeds of greatness are there.

Deaf and Hard of Hearing gamers should have little problems. The option to turn on subtitles is available in the game's menu, and the auditory cues to indicate enemy presences or attacks are of minimal importance. In general, I'd say that this game is quite accessible except for the ending sequence—for some reason, the funny dialogue as credits roll has no subtitles whatsoever, doing hearing-impaired players a bit of a disservice by excluding them from hearing the "reward" for completion.