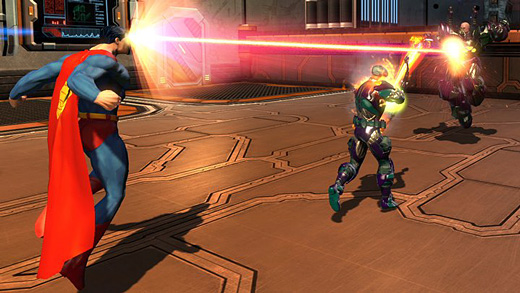 DC Universe Online: I freely admit that I've got next to no experience with MMOs. I rarely play games on the PC, and my schedule is so busy and erratic that trying to coordinate with other people is next to impossible. As a result, I had only cursory knowledge of what DC Universe Online had to offer. However, after the thorough walkthrough provided by one of the game's developers, I'd be more than willing to give this one a shot.

The story: Famous DC supervillain Brainiac manages to take over future Earth. Lex Luthor escapes the catastrophe and returns to the past in order to warn the heroes of today that their ranks must grow in order to have a hope of fighting off the evil android. The player takes on the role of a brand-new hero created to help with this future struggle by establishing themselves in the present.

The game: DC Universe Online begins with the player creating their character from a wealth of options. Male/female, skin textures (reptile!) and multiple costume options are included, as well as the ability to choose between being a hero or villain. After picking a side, the player then selects a "mentor" as their contact person for the adventure. (Superman was my big brother.) Of course, players have a number of choices when it comes to the kind of abilities and they want to use. There are too many details to cover here, but essentially there are three basic branches: Techno (i.e. Batman), Alien (i.e. Superman) and Magic (i.e. Wonder Woman.)

While there seem to be quite a number of things to choose from, I have to admit that I was a little disappointed that they didn't seem to be any options to alter body shapes. There was a buff Male and ridiculously endowed Female, but no sliders for players who wanted a character who did not fit into one of those archetypes. 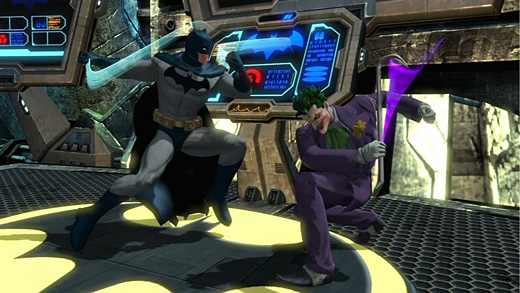 When asked about this, the developer stated that it was their intended goal for all heroes to be able to "visually fit into the DC universe; for them to appear as though they could be real heroes." It was also stated that famed comics artist Jim Lee was in charge of managing the visuals, and it was his oversight that guided their development. (I actually could have guessed that based on the physique of the female characters… the breasts are classic Lee.) This particular aspect felt like a strange place to limit player choice, but I'll reserve judgment until I get more time with it.

After putting a quickie character together, the game begins inside one of Brainiac's airships stationed above Gotham city. This area acts as a tutorial and introduces the basic mechanics before letting the player out into the open world.

I'm quite happy to report that while DC Universe Online retains things that are common to most MMO/RPGs (tons of gear, skill trees, hotkeyed abilities, etc.) the actual combat is real-time and skill-based. The player needs to navigate the environment and attack enemies as though they were controlling a traditional third-person action title.

I had no problem at all and jumping right into things and laying waste to the mechanical minions in the starting area, using starting versions of a lightning bolt and enhanced melee. Physics also play a role, with heroes or villains being able to pick up items (explosive barrels, enemy characters, buses, etc.) and toss them in a way that reflects the console-inspired action.

Near the end of the tutorial, Superman made an appearance and annihilated the remaining enemies in the area with little effort. After giving me a quick pep talk, he took off and I made my way to the player hub in the city below. 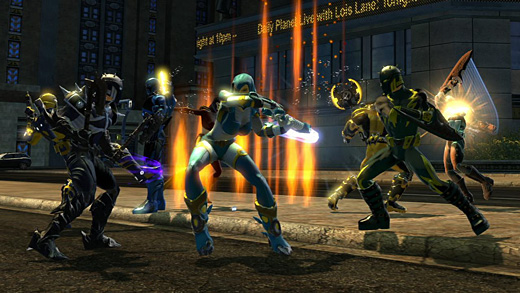 Checking out the Gotham home base, there were a large number of beta players (PC version) going about their business. Shopping, checking e-mail and messages, chatting with other players (voice chat will be enabled in the final version, but was disabled for the demo) and receiving missions are the main activities. Batman contacted me via communicator and alerted me to some thugs in the area. After accepting the mission, I went outside the hub and took a quick look around.

The character I put together had a flying ability, so I flew straight up above Gotham and surveyed the area. The square footage was immense, and during the time I had with the game, I was not able to find any invisible walls or limits to the landscape. That particular curiosity satisfied, it was a simple matter to follow the on-screen mini-map and start busting up some crooks. Although I was not in a group or a league, other heroes being played by real people saw that I was in the middle of a battle and popped in to lend a hand. (Special thanks go out to Arrow Green, and yes, that was his name.) Satisfied at emerging victorious, this ended my hands-on time.

Final impressions: Were positive. Playing a superhero is a subject that is of interest to me as both a gamer and a fan of comics, and dipping my toe into something console-based is quite welcome. Flying freely around the environments without restriction was a joy, and I would have loved another couple of hours to dig deeper into the abilities and stats.

On the other hand, the limits on character creation were a little concerning and I'm curious to see what kind of variety the missions present. If most missions are simple beat-'em-ups, I can foresee the appeal wearing off before too long. However, if the game manages to deliver a decent amount of differentiation in the missions and some interesting bits of story, then this may turn out to be a real winner. At this point it's too early to tell, but I can certainly see potential here. 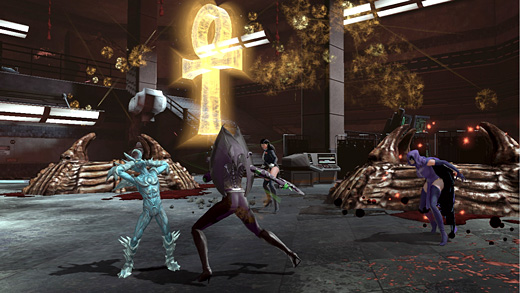 Other pertinent bits of information:

That's it for now. More info as it comes. Special thanks to @Strident, @Dits, @ParkerXL, @ThiefOfHearts and @JayPullman for their contributions to my list of questions! You guys made me look really sharp!  😉

Ok I could less about this milking the DC franchise, Champions online has a great level of customization of skills and powers. It kinda falls apart in other areas like story but its balanced more to fun than anythign else. Is DCU online balanced to fun? From what I have seen you are forced into specific “classes” some may not be annoyed by that but I have found it to be boreish. I made chain wielding dark/magic class Character most of his powers worked within the class I made up (IE all attacks but for punch are chain based) but… Read more »