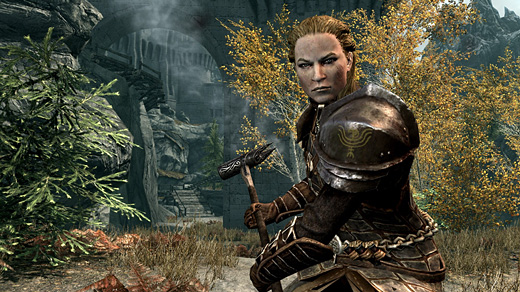 I just wrapped up The Elder Scrolls V: Skyrim—Dawnguard DLC last week, and as someone who's not a Skyrim fan at all, it… wasn't too bad.

Before going further, I'm sure some of you are wondering why I bothered with it, considering that I had nothing but bad things to say about Skyrim earlier.  I go into greater detail on the most recent GameCritics podcast, but basically my son took a shine to it and wanted to play together, so I figured it would be a good bonding opportunity.  It certainly wasn't my first choice for something to share, but it's more palatable than some of the iOS crap he's been on recently, so this was good enough for me.

Although Dawnguard was better than I had expected (and honestly, I expected the worst) it still had some problems.  On the other hand, it's a very interesting piece of DLC in that the parts that it gets right shine a spotlight on what I found so wrong with Skyrim in the first place.

Where Dawnguard succeeds is that it manages to inject some actual personality and character in a game that is painfully bereft of it—specifically, via the vampire follower Serana.  Her introduction is quite interesting, she's got an unusually large amount of dialogue compared to the other followers, and her relationships are intriguing.  Instead of spouting a bunch of lore and funny, made-up LARP-style terms, she talks about her parents, her situation, where she's going in the future.  Despite the fact that she's a vampire and the quest you're on is to prevent the sun from being put out for all eternity, she is incredibly easy to relate to. Basically, she's the most complete, well-rounded character that I've encountered in the game so far.

Also, I can remember her name, which is something I can't say for anyone else in the adventure.

Other highlights include an undead horse that can be summoned at will, a new castle to occupy, and new skill trees for both vampires and werewolves.  My son chose to be a wolf and he enjoyed that fairly well, but it seemed a bit underpowered to me, even though it was much better than it was previously.  The vampire side seems greatly improved, however.  The powers are a lot of fun (transforming into mist or bats, a gargoyle summon, flying, etc.) and it was a fun metagame to decide which towns I would terrorize, and which ones I would leave alone.

Between actually getting a fairly decent character and more action-oriented powers, things were going well and I was surprised that there were fun moments happening.  That said, there's still enough of the bad stuff to prevent it from completely redeeming the experience—in a nutshell, any time the game goes into a dungeon, things go straight into the crapper. 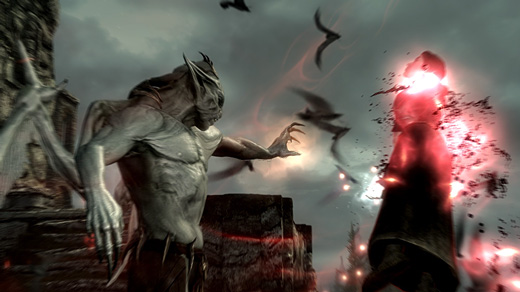 On the whole, I find the dungeons are generally way too long, too repetitive, and too uneventful.  Going through hallway after hallway without a lot going on slows the experience down to a painfully tedious pace, and adds nothing at all to the game.  I know that these dungeons are supposed to be "better" than what we got in Oblivion, but they're still flat-out boring.  Things got extremely bad in the Dwemer ruins and the "collect water" mission near the end.  It was almost like a death march of patience to get through these, rather than anything that was exciting or suspenseful.  If there was ever a case where "less is more" proved true, it's the dungeons in Skyrim.

There were other things holding the experience back, like not being able to loot when in vampire mode, and then having the transformation take more than a few seconds to happen.  It doesn't sound like a big deal, but believe me, it's a major disincentive to go vamp when you're looking for stuff to pick up and you've got to switch back and forth over and over.  It also sucked that the vampire form is too big to navigate through some passageways comfortably, and can be pretty awkward to use indoors.

Although I got more enjoyment out of being a vampire than I would have guessed, the highlights of Dawnguard just made the rest of Skyrim seem that much worse.  I realize that Bethesda has no shortage of fans when it comes to the series, but for me, I need a lot more character and a lot more action in order to really immerse myself in a fantasy like this…  If the Elder Scrolls developers can take a few lessons from some of the other, newer RPGs making waves like the Souls series or Dragon's Dogma and blend it with what they've got, their next project should be pretty incredible.

Speaking of Skyrim, I find it pretty interesting to watch my older son play (age 10) for many reasons, but one thing that really stuck out to me was when he discovered that you can get married in the game.

Like me, he usually plays a female character if given the choice, so after finding out that you can have a spouse, he asked me where he could find a husband.  I told him that the game was flexible, and that he was not limited to hetero relationships…  I give Skyrim credit for offering not only same-sex marriages, but also interspecies options as well.

Anyway, he paused at this for a moment and looked a little confused, and then preceded to go off and quest for a willing man.  Although he didn't say so in so many words, I perceived his hesitance to be about the possibility of having a girl-girl union, yet he had no issue with role playing as a woman himself and seeking out an appropriate male match. I don't quite know what to make of it, although it was fascinating to see where he's drawing lines at this age.

Skyrim is more disjointed than Oblivion and FO3 put together 0-o.

I have messed with it some but good god I will wait untill all the DLC is done before I touch it. I wish they(make that the industry) would get back to making games for gamers and not just anyone who plays games… >< I still have not finished FO3 yet...then off to FO:NV LOL

i was immediately suspicious of this DLC the moment it was released — and by “released” i mean how it slunk through the Xbox Live-backdoor without barely a blip on the PR radar.

thankfully, i had more than a few friends willing to blind-buy & give me their opinions to confirm what i already suspected.

they all agreed while it’s not bad, per se, it’s definitely not worth $20.

i’ll wait till it hits $10, assuming it happens in less than month when i lose interest all together.

Hi David. Thanks for your comment. >>It’s a hard thing to explain, but in every game, and conspicuously in games where you HAVE to be the female, I feel only irritation at the prospect. Take Chell in the Portal franchise – what a politically correct decision, a blind act of discretion with no consequences – to select a heroine for the game. I’m not quite sure what you mean here with regard to Portal… Perhaps you’d like to elaborate? As to the rest of your comment, I don’t have any hard statistics, but I would guess that the number of… Read more »

I guess you can be happy you are not a female gamer who is forced more often than not by the developer to play as a male character.

That’s interesting, that you usually choose a female character. I made one female character in the original KOTOR, immediately felt distaste for it, and remade as a male (with all the same stat choices). It was an uncomfortable fit – I didn’t like wearing that skin. It’s a hard thing to explain, but in every game, and conspicuously in games where you HAVE to be the female, I feel only irritation at the prospect. Take Chell in the Portal franchise – what a politically correct decision, a blind act of discretion with no consequences – to select a heroine for… Read more »