To Middlingly go Where no one (on 360) has Gone Before… 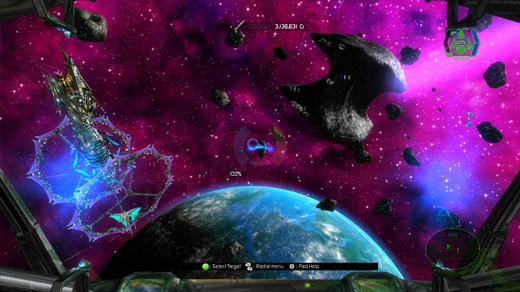 HIGH A huge universe to explore.

LOW Each star system is nearly identical to the next.

WTF Have these developers never seen a good menu system?

Taking command of a spacecraft and exploring the stars is a concept that I find extremely fascinating. I'm surprised current console game developers don't tackle it more often. The absence of interstellar adventuring was understandable in previous generations when the hardware couldn't support that kind of scale, but while consoles have been lagging, PC developers have not historically been working under the same constraints. There have been several notable PC entries in a universe-exploration vein (or so I'm told) such as Freelancer or Elite, but none have made the jump to consoles until now.

As implied, DarkStar One is a free-roam spacefaring game. The main character's father is killed under mysterious circumstances, leaving behind the eponymous DarkStar spacecraft. After completing a brief series of training exercises, the player is essentially set loose in the universe to either follow the storyline and solve the murder or participate in a number of other activities not essential to completion of the game— things like trading cargo between star systems for profit, becoming a pirate, or hiring on for escort missions.

While the first-person ship controls are fine and the graphics get the job done without being overly impressive, my main impression of DarkStar One is that the game feels like a bare-bones port with very little concessions or tweaking for console players. I'm not sure how well it was received when it was first released, but compared to current standards, it feels extremely low-rent and in need of polish.

For example, participating in smuggling or in goods trading is not explained clearly, and there's no mission serving as a walkthrough for players to get the gist. I could read the menus and see the charts when tooling around at the local trading station, but the content was just there. I struggled with it for a bit, failed to glean anything significant from the manual, and then simply gave up and moved on. My interest gave way to apathy, since I felt if the developers weren't going to take the time to explain the murky systems, then I wasn't going to take the time to stumble through them. If the content's there, why not take the time to acclimate players to it?

Another area where the devs could take a cue from consoles are the ship and its equipment. The DarkStar is apparently some sort of living craft, capable of growth and enhancement. When first given the chance to upgrade it, the benefits of choosing between fore, aft, and center sections wasn't clear. I made a blind choice hoping for the best, and had no idea what improved once I committed. Only after I spent my upgrade did the game bother to tell me which one was the correct one to start with, but by that time it was too late. The effects of upgrading should be blindingly obvious—by comparison, RPGs have had this sort of system down for years. 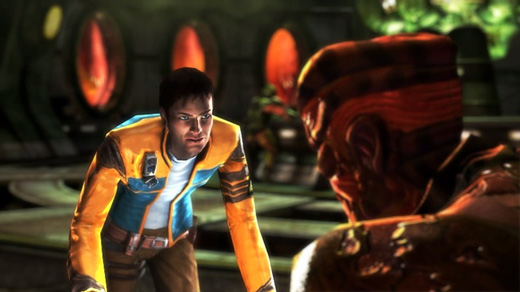 It was a similar situation with the other pieces of tech. There's plenty to see and choose from (missiles, cargo drones, etc.) but the game makes no effort to make the choices between them transparent or relatable. How exactly does a turret work? What's this purple plasma glow doing to my ship? What's the advantage of having a level II docking computer? Maybe the approach of "dump everything in the player's lap and let them figure it out" works on PC, but it doesn't fly on a console.

After abandoning much of the peripheral content and deciding to stick with the main storyline, I do want to say that DarkStar One feels as though it was put together by people who really cared about it. It has a very likable, earnest air, and the general concept of freely piloting around the universe is a good one. When entering a new star system, there are usually loads of ships to interact with (both friendly and hostile) and points of interest found scattered around. When tired of any given area, the player can warp to another system at will and continue the process of discovery.

The scope of the available area and lack of restrictions were very much appreciated, and simply traveling kept my interest for a good while. However, after checking out a number of galaxies, I began to notice that each star system was essentially the same, both visually and in terms of content. Each part looked and felt like the others, and a sense of cookie-cutter repetition set in far too soon.

Making matters worse, the game's absence of dramatic tension and lack of "wow" moments during play only served to magnify the flatlined energy level. There's a very deep and detailed mythology behind the game, but most of it is delivered through the manual or huge chunks of optional text. The same goes for "news updates" about events in the universe, and other things which might be used to potentially generate some excitement—it's almost all emotionless, actionless text.  "Show it, don't tell it" seems to be a foreign concept here, and it's hard to stay engaged.

Although I certainly admire the attempt and have no damning complaints against DarkStar One, the combination of sameness during play and lack of transparency in the game's systems caused the experience to cool off for me before credits rolled. I certainly understand that it's unrealistic to expect a developer to fill an entire "universe" with stunningly unique content, but while DarkStar One's heart might be in the right place, it needs a top-down overhaul before I can recommend that anyone climb aboard for the journey. Rating: 6.0 out of 10.

Disclosures: This game was obtained via publisher and reviewed on the Xbox 360. Approximately 8 hours of play were devoted to the single-player mode, and the game was not completed. There are no multiplayer modes.

Parents: According to the ESRB, this game contains alcohol reference, drug reference, fantasy violence, language, and mild blood. While the game is clearly aimed at teenage players (and above) I can't say that I saw anything during my playtime that was especially objectionable. The only violence that occurs is between ships in outer space, and the rest of the content was extremely tame. I don't think children would find this game enjoyable, but I didn't see anything worrisome about it, either.

Deaf & Hard of Hearing: You should be aware that while a majority of the game's dialogue is easily accessible through subtitles, during some missions informational updates happen in the middle of action. It's a little tough to read what's being said while enemy ships are taking potshots. That said, the information is accessible through a menu option, so there's no real loss. Aside from that issue, there are no significant auditory cues during gameplay and all relevant information is displayed onscreen.

Well, it would be a hard decision if I owned a 360. Anyway, your description calls to mind fond memories of this old DOS game I was (and still am, to be honest) utterly consumed by: NOMAD. As the first interstellar representative of Earth, you’re fired off to the skies on your own to basically see what’s out there. Naturally, trading, upgrading, exploring, and space battling ensue. It also had this great sense of humor, and each alien race had it’s own little made up language (with sound!). Someone should just toss that up on 360 Arcade and PSNetwork and… Read more »