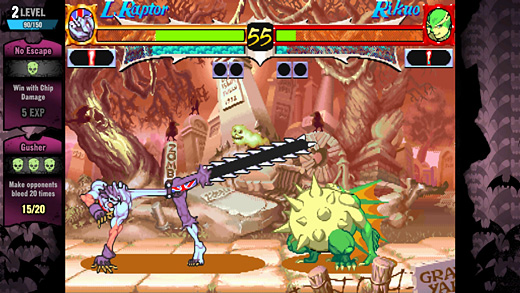 HIGH A fantastic collection of the series's best installments.

LOW It's not playable on Vita.

WTF So, exactly who is Lillith supposed to appeal to…?

On paper, a fighting game from Capcom starring classic monsters and produced with hyper-detailed 2D animation, a killer soundtrack and a rock-solid combat engine seems like a no-brainer, right? I mean, what's not to like? How could it not be a sure thing?

Apparently, anything's possible. Although I fell in love with it instantly, I'm hard-pressed to find anyone who's even heard of Darkstalkers outside hardcore circles.

It's a real shame, but there's still time to appreciate the series—the original is available as a stand-alone via PSN, and the recently-released Darkstalkers Resurrection

Despite choosing from succubi, fishmen and rock-and-roll zombies instead of the usual shotokan disciples, military enforcers and random ninjas, players familiar with Capcom's other works will find themselves instantly at home—the movesets of most characters are based on the same half-circle, quarter-circle, dragon punch and charge-up moves that the Street Fighter gang use.

However, while the fighting is just as enjoyable as one would expect from Capcom, what always made the Darkstalkers series stand out was its imagination, attention to detail, and a healthy sprinkling of unexpected outrageousness.

If you ask me, the character designs here are among the best Capcom has ever turned out—eye-popping over-the-topness is the order of the day, and it's fantastic. Seeing the mummy Anakaris turn his fists into massive, decorated cobras is jaw-dropping, and catching a glimpse of Demitri the vampire's demon form as he teleports around the screen is a great touch.

Every character has a wealth of stylish moves, emotive expressions and jokes hidden within single-frame animations. Although other fighters have taken cues from it since then, this stuff was far outside the box at the time, and even today, there's no denying that Darkstalkers has a certain design perfection that others lack.

However, while I would have been quite satisfied receiving arcade-perfect versions of these games, Capcom went the extra mile by offering a wealth of little touches and tweaks to update the content and make it more appealing to today's players—things like in-game challenges that entice players to strive for more than just a simple win, tons of unlockable artwork and movies, different filter settings and even a virtual mockup of an arcade cabinet, playable and watchable from an outside "over the shoulder" angle.

In fact, this is such a solid package that I don't have any outright criticisms, although it would have been nice if they'd thrown in the original Darkstalkers for completion's sake. Also, I was more than a little surprised to find that this content isn't compatible with the Vita. It would be a perfect fit for that handheld, and it's a shame the opportunity was missed.

In any event, I've never understood why something as fresh and unique as Darkstalkers never found the fanbase that it deserved, but with this sharp re-release, I'm hoping that players unfamiliar with Lord Raptor, Morrigan, Rikuo and all the rest will discover their darkly sweet music of the night. Rating: 8.5 out of 10.

Parents: According to the ESRB, this game contains: blood, partial nudity, suggestive themes, and violence. Although I find it a little hard to issue a warning on this game, the fact is that most of the female characters are highly suggestive in their design and younger players may find the action a little eye-popping. In terms of the violence, it's standard fighting game fare… a lot of punches and kicks with exaggerated impacts, but nothing I would call especially graphic in terms of blood and gore.

Deaf & Hard of Hearing: There shouldn't be any problems. All the action is clearly displayed on-screen, with nothing hidden or out-of-sight. I played with the sound off and didn't notice the lack of any significant auditory cues. I'm calling this one accessible.

Spent many, many hours back in high school with “Night Warriors” and the SEGA Saturn’s godly six button controller. Ascended the Chaos Tower on my PSP countless times. In fact, it was probably the PSP game I played the most till I started huntin’ monsters. This HD remake looks solid, and I’d LOVE to go head-to-head against my wife. That said, all I can manage to muster for this one is a lackluster “meh”. 2-D fighters are among my favorite genres, and as far as I’m concerned Capcom are the masters of the form, but I think I’ll take a… Read more »