Ending the World in Style 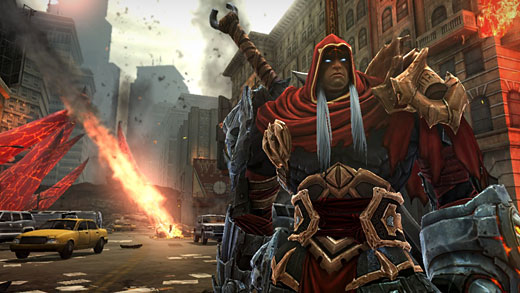 HIGH Beautifully cohesive and flows at a smooth, fast pace.

LOW Azrael's dungeon is too sloggy.

As someone who talks about games every day, it was impossible to avoid noticing that when the topic of Darksiders

comes up, the first thing out of anyone's mouth is to mention The Legend of Zelda.  See? I've just done it myself.

However, I think that's giving a little too much credit directly to Zelda and not enough to the developers at Vigil. After all, there are few things under the sun that can truly be considered original. It's possible to trace lines from modern-day works to those that came before (and to the works before those) in any medium. At what point does one stop comparing something to something else, and begin to acknowledge it as its own creation?

Darksiders is a third-person action-adventure starring War, one of the four Horsemen of the Apocalypse. Yes, those Horsemen. A conflict has broken out between the forces of Heaven and Hell, and Earth has been ravaged by the struggle. However, there is a bit of mystery surrounding the circumstances—apparently it was not the proper time for the world to end, and higher powers in the universe are demanding answers. War goes to work to clear his name, and to suss out what triggered Armageddon.

As someone who likes a story to keep things moving, Vigil's work on the script and plot were great. There was enough motivation to keep me engaged, but not so much that I ever felt that the cut-scenes or drama were going overboard. I also thought that the writers did a great job taking classic elements of the apocalypse that one would expect and twisting them just enough to keep them familiar-yet-fresh—the demons aren't all bad, the angels don't quite live up to their reputation, and there's a lot of grey in between.

Equally impressive are the art direction and animation in Darksiders. Although I must admit that I'm not the biggest fan of Joe Madureira's illustration style, seeing his visions come to life with silky-smooth movement added a pleasant layer that wasn't there for me before. The complex, yet never overwhelming or absurdly combo-heavy combat went hand-in-hand with flowing character kinetics and refined ease of control. While many games end up favoring one thing while sacrificing another, the balance here was admirable. 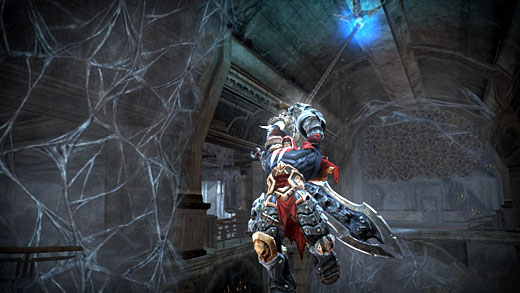 Along the same lines, I was impressed by the environmental details of Darksiders. I'm a sucker for a cohesive, well-thought-out world (aren't we all?) so I greatly appreciated the little things on display—small bits of furniture in ruined buildings, or seeing a wrecked ambulance on a broken road that wasn't cut-and-pasted a dozen times over. I was also fascinated by the fact that Vigil created a sub-dimension to travel through when taking a time-saving warp. Any other developer would have simply had the player appear in the next area, but having this interstitial space helped cement the entire world in my mind. There were dozens of other examples of these details, and they show an above-average level of love and attention given to even the littlest things.

I realize I'm starting to sound like a broken record of praise by this point, but while exploring this ruined Earth, the level designs and pacing in Darksiders were remarkably better than I'd expect from a first-time studio. Areas were directed enough to keep the player moving forward, yet open enough to give a good amount of freedom and exploration. It was exactly to my taste. I appreciate games that don't waste my time by making me guess where I need to go next, yet there were plenty of nooks and crannies around for a return trip after collecting one of the various power-ups or ability-granting items.

Really, my only criticism of Darksiders is that I consistently felt that each "level" went on just a bit too long. They weren't drawn-out or arduous to the point that I lost enthusiasm for what I was doing, but I wouldn't have minded if the main areas prior to each boss were just a little shorter. The worst instance of this was Azrael's dungeon, a place where lasers need to be redirected to progress. It was by far the least interesting of the world's areas, and it felt at least three times longer than it needed to be. In fact, it was so sloggy that if this part had come earlier, I might have considered quitting the game. I'm glad it was held back until the end, but for a title that seems so pitch-perfect in every other respect, it was little surprising to hit a stretch as dull as this one was.

Azrael's dungeon aside, there is a great deal to enjoy in Darksiders

and I'm glad I saw it through to the end. Every aspect of production is of the highest quality, astute design decisions are made on nearly every count, and such a level of confidence and sophistication from a first-time studio like Vigil is virtually unheard-of. There is a hell of a lot more going on here than a bunch of guys aping Zelda, despite what parallels may be drawn. I say let's give credit where credit is due and stop defaulting to such a lazy comparison. Rating: 8.5 out of 10.

Disclosures: This game was obtained via retail store and reviewed on the Xbox 360. Approximately 14 hours of play were devoted to the single-player mode, and the game was completed. There are no multiplayer modes.

Parents: According to the ESRB, this game contains blood and gore, intense violence, and suggestive themes. While the warnings here are mostly appropriate (although I really can't think of what the suggestive themes are…) the game doesn't come off as brutal or as graphic as one might think. Possibly because the art style is so colorful, ripping the wings off of bats or decapitating large demons didn't strike me as potentially harmful as the violence in other games does. I wouldn't sit my son down with this game and let him go to town, but I wouldn't exactly leap up to turn the TV off if he happened to walk through the room, either.

Deaf & Hard of Hearing: You shouldn't have too much trouble. Although the game can be quite fast-paced at times, there aren't really any significant auditory cues and with the bulk of combat being melee, instances where enemies are off-screen are fairly rare. All dialogue is accompanied with subtitles.

[quote=Seluropnek]I really remember liking Darksiders when I last played it. I liked it so much that I played it twice and got every last achievement. However, I do think it’s a bit telling that this was only six months ago and I can’t tell you a damn thing I remember about it. [/quote]

If you’ve forgotten all about the game, you should play it a third time.

I really remember liking Darksiders when I last played it. I liked it so much that I played it twice and got every last achievement. However, I do think it’s a bit telling that this was only six months ago and I can’t tell you a damn thing I remember about it.

the developers themselves sited zelda as a template and reference point for their game. that’s probably why that so-called “lazy” comparison is so often made. they made it themselves before the game was even out. and when that template is so clearly observable, it’s hardly lazy to make note of it’s existence. darksiders structure is an homage to zelda whether you like it or not.