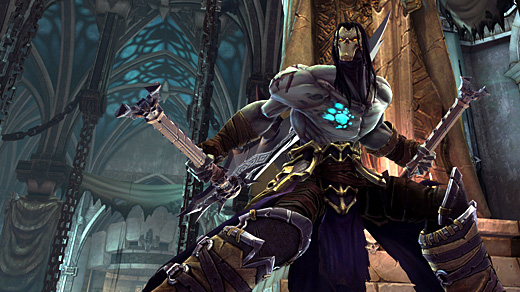 I was invited to a special Darksiders II

hands-on press event hosted by THQ taking place in San Francisco. Being a huge fan of the first game, I was glad to accept and in the interest of full disclosure, it should be known that airfare and hotel were provided.

The day started with a brief talk from one of the developers giving an overview of the sequel, and what to expect. The attendees were then allowed about two hours to play through a large chunk of the game's first area.

Apparently, the starting zone is about the same size as the entire world of the first Darksiders, so players can expect a significantly bigger realm to explore. It was also said that although the critical path will be slightly longer than the first game, there are several areas (many of them quite significant in size) which are entirely optional. Although there weren't many specifics, it was suggested that Darksiders II will have substantial role-playing game (RPG) elements not present in the first game such as sidequests and leveling up.

The section of the game I had access to was set about six or seven hours into the campaign. As a way of compensating for missing out on the beginning tutorials and introduction of gameplay mechanics, THQ had small strategy guides

available to leaf through. There were also a number of staff on-hand to answer questions and help with any sticking points.

Immediately after starting, it was easy to see several differences between Death (the protagonist of Darksiders II) and War, the hero of the first game.

Death is far more nimble and acrobatic, and quite reminiscent of Prince of Persia in some ways. The level design of the dungeon I was in incorporated a number of climbing and vertical elements, and it felt as though I was skittering across walls and up ledges just as often as I was walking on the ground. It's a big shift, and marks a clear foundational difference between the two Darksiders titles. 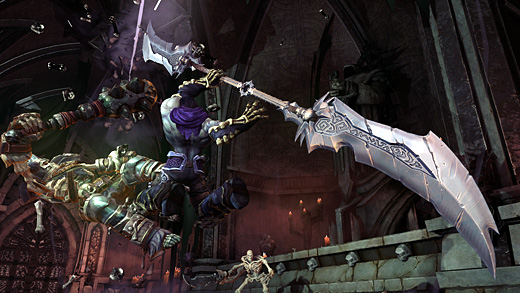 Another big change is that enemies drop loot such as new weapons and various pieces of armor. Soon after starting, I had several cowls, boots, gloves and other things to equip, each visually changing death's appearance during gameplay. In addition to the scythe that one would expect the Grim Reaper to wield, I also had claws, a hammer, and tonfas, and each of those had several variations with different stats and attributes. Although I did not find one myself, several people playing the demo found "possessed weapons" which are capable of devouring other loot-type weapons and powering up over the course of the adventure.

In terms of level designs, the developers said they were shooting for more variety and unpredictability in the world. For example, the dungeons are all of varying size, and some are more linear while others are labyrinthine. Certain areas will have the traditional boss encounter at the end, whereas some will have a boss in the beginning or middle, or not at all. In the section I played (reportedly, one of the biggest dungeons in the game) Death had to travel back and forth between several rooms in an effort to find energy crystals for a giant robot. Besides the vertical traversal of walls and swinging from ceilings, there were large golem-type vehicles used to destroy certain barriers and enable access to far-away ledges. There was also an NPC character along for the ride who could toss Death across long chasms, and who helped out during combat.

Speaking of combat, the fights seems just as solid and engaging as they were in Darksiders.  Death can switch back and forth between main and sub weapons seamlessly, and a new method of mapping attacks to the controller means that there are eight different abilities that can be accessed without having to go into a menu. After assigning some points to Death's two skill trees (there may be more than two, but those were all I personally saw) I was able to summon a zombie from the ground, or call down a flock of crows to attack enemies. Death could also do a teleport slash and modify some of his other abilities with extra perks. Similar to War, Death has a "rage form" attack where he transforms into the traditional hooded angel of death and becomes invincible while reaping across the battlefield. 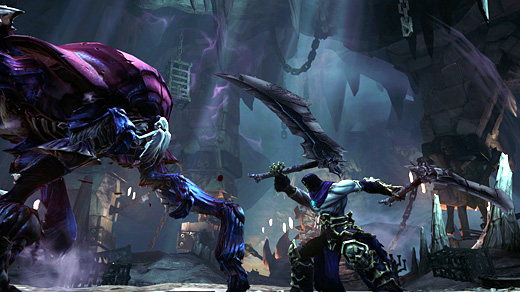 While at this hands-on, I also had a few minutes to talk to a developer one-on-one and I asked him questions posed by some of my followers on Twitter.

Will there be any reason to go back and revisit areas after earning new abilities?

It's never necessary to go back and revisit an area, but there will be plenty of items to find in areas that you previously couldn't access, so people interested in getting the most from the game will be rewarded for doing so.

How good is the loot that's dropped by enemies as compared to what is earned through the storyline?

The best loot can be found in hidden chests, but it's only slightly better than some of the loot that is awarded through the storyline. The loot dropped from enemies is of a lesser quality, but possessed weapons (which are random drops) can become quite strong if cultivated by the player.

Will there be any appearances from War, or the other two Horsemen?

It's been reported that Darksiders did not have much planning time before the game started being built. How much time for planning did the team allot for Darksiders II?

We basically had no time at all for planning with the first game, so now that we actually had a planning period for this sequel, you could say that we had "infinitely more" planning time.

The playtime for Darksiders was just right (or even a little too long) for an action game of that sort. With Darksiders II being so much larger, are you afraid of overkill, or burning players out with a campaign that's too long?

The critical path will be very similar to the first game, so it's up to the player to experience as much or as little of the optional content as they like. Of course, every player is different, so it's hard to say exactly how long the campaign will be for most people. 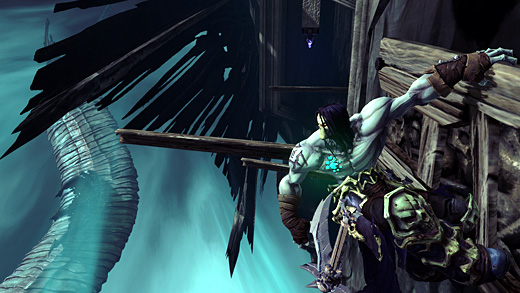 Overall, I came away from Darksiders II with a lot of things to chew on. While this sequel will be familiar enough to fans of the first game to make them feel at home, there are enough changes, tweaks, new ideas and new content to clearly differentiate this adventure from its predecessor.

is currently set to release on June 26, 2012 and will be available on PC, Xbox 360, Sony PlayStation 3. A Nintendo Wii U version is still planned for release at an undetermined point in the future. For more information on Death's adventures in Darksiders II, click on over to the official webpage.

I played the heck out of Darksiders and enthusiastically recommend it! I’m really looking forward to Darksiders II and am stoked to read about the improvements. Sounds like some solid and innovative changes. I’m intrigued … and looking forward to experiencing what they did with the RPG element. Pre-ordered! Great report, thank you for the update. And I’m very sure War will make an appearance. (Oh please, Vigil!)

Never played the first Darksiders, but this actually sounds quite good. Thanks for the report!