Scary Hard… On The Eyes 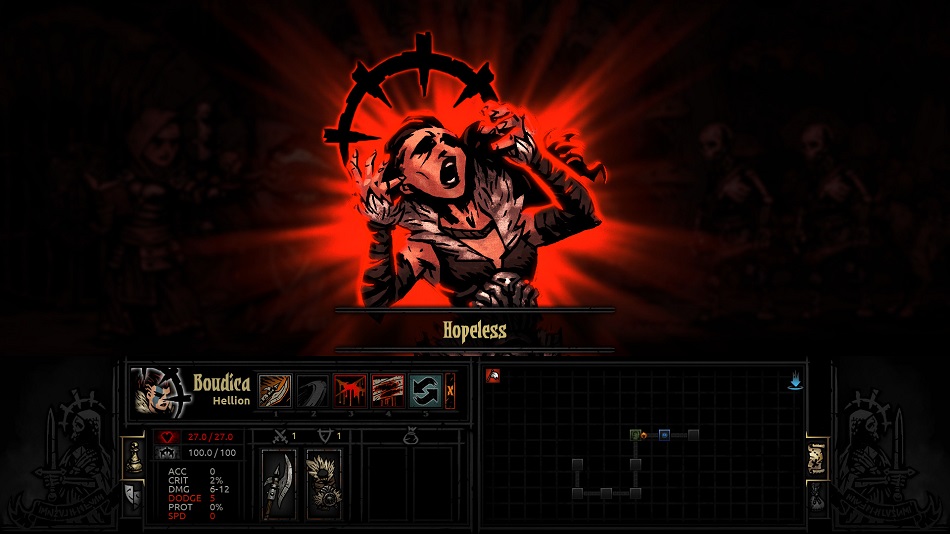 LOW It’s tough on the eyes in portable mode.

WTF Why doesn’t the DLC come standard with the base release?

I first saw Darkest Dungeon when it appeared on Kickstarter a few years ago. The stylish graphics, Lovecraftian inspirations and turn-based combat all caught my attention, and I followed it closely. However, I’m not much of a PC player so I held hope that it would come to console. That hope held true, and after making its debut on the PS4 and Vita, this grim dive into shadowy horror is also available on Nintendo’s Switch.

This side-scrolling, turn-based roguelike RPG begins with the player receiving a letter from an eccentric uncle. The old man had become bored with his life of luxury and began dabbling in the black arts. Such pursuits rarely end well, and he unleashed all manner of nasty things from excavations beneath his mansion. He ends the letter by committing suicide, but before he pulls the trigger, he implores the player to come to the manor and clean up the eldritch mess he’s made.

Interestingly, the player’s character never takes a direct role in Darkest Dungeon. They’re not even seen. Instead, they’re a phantom presence guiding action in the decaying town near the estate. This hamlet is basically a staging area for assaults into enemy-filled catacombs, and carriages full of recruits arrive constantly, all eager to plumb the depths — although considering the success rate, I’m not sure why they’re so quick to try their luck.

The classes are varied, and the player must create a party of four to venture into nearby areas. On offer are knights and men-at-arms for the front lines, crossbowmen and riflewomen for the rear, clerics to heal, tortured wanderers with a dark side, mystics wielding magic of questionable origin, and more. Each has a range of special abilities and can be built to perform certain roles.

However, there’s a twist — since this is a side-scrolling game, the party walks single-file through dark hallways and dank passages, and certain abilities can only be activated when a character is in the correct position. For example, the Vestal can only perform her strongest healing when she’s in the rear, but while she’s back there, she can’t attack with her mace. Similarly, the Crusader is most effective when leading the charge, but if he loses his place at the front, he’s only good for cheering the rest of the group on.

Positioning is key with enemies, as well. Spellcasters are generally protected behind tanks or heavy hitters. Certain classes have the ability to rearrange enemy lines (let’s bring those squishy mages to the front, shall we?) and certain attacks are effective for hitting specific positions. The Jester bleeds the center of a hostile group, a Bounty Hunter’s hook can bring distant foes near, and a Hellion can perform a surprise distance attack when she’s not raking the front. 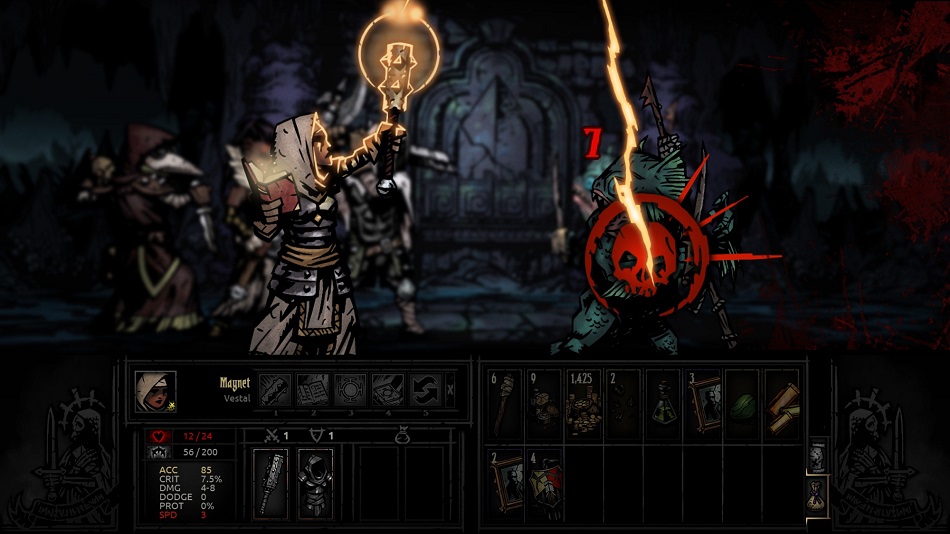 Adding another layer of complexity is that each character can only equip four abilities from a much larger pool, so assembling all of Darkest Dungeon’s pieces results in an intricately-layered combat experience that is deeply strategic and satisfying. Finding a party that synergizes leads to decisive victories, but preparing for contingencies is a must – a group that dominates with a Leper in the lead might be wholly ineffective if he gets punted to the back of the line. While it might seem to be standard turn-based combat, there’s a lot more to it than picking someone with a big sword and marching forth.

Aesthetically, the game is phenomenal. The rich, bold artwork is incredibly on-point, and all of the characters, both friend and foe, are distinctive. Everything is gothic and diseased and horrible in the best possible sense. These visuals are a perfect example of style and design trumping the raw power of polygons, and I can’t get enough of them. Also superb is the voice actor who reads the uncle’s journals and narrates during fights. His somber tone adds welcome and appropriate gravitas to every trip through horrible hallways.

While I am absolutely in love with so many parts of Darkest Dungeon, it can feel like a grind on the standard setting. However, the devs have added a new ‘Radiant’ difficulty which makes the experience easier and shorter overall, although that’s not to say it isn’t challenging — players still need to mind their Ps and Qs.

Another great quality-of-life tweak is that there are now several more elements that can be toggled on or off to suit a player’s taste. Think it’s bogus that corpses create obstacles on the battlefield? Nix them by checking a box. Want to limit the devastating damage dealt by enemy critical hits? There’s a toggle for that too. Darkest Dungeon’s notorious level of challenge is still 110% present for those who want it, but I appreciate these optional modifiers that make it a more approachable experience for those who adore Red Hook’s work, but don’t want to spend a hundred hours in a pitiless meat grinder.

Sadly, while I wish I could say that the Switch version is Darkest’s best, a significant issue of concern is that everything is quite small on the screen in portable mode. Rather than reworking things to better fit play on the go, Dungeon is simply sized down. That might work for some titles, but there’s a lot going on here, and it’s tough to read text and discern details. My eyes were struggling with fatigue after just a few runs. Playing in docked mode on a TV is fine, if a bit grainy, but taking it on the go just isn’t as comfortable as I’d hoped.

The other issue I have is that the controls feel extremely fiddly. While it’s possible to get around a lot of this by using the touchscreen, trying to use the buttons and sticks to navigate multiple layers of menus is often baffling. It becomes easier with practice, but it just doesn’t feel optimal or natural.

While I’m glad that I waited for Darkest Dungeon to hit the Switch, I still have misgivings. It’s certainly better on the go now than it was on the Vita, if for no other reason than the screen is simply larger, but it doesn’t feel like a great fit. However, in docked mode it’s still the same amazing game that it’s always been, although it looks sharper on PS4. After holding out all this time to finally get the optimal experience, there’s just no easy answer. However, one thing does remain clear — now that the devs have added even more tweaks and amenities, the core experience is still outstanding no matter what platform it’s on.  Rating: 8 out of 10

Disclosures: This game is developed and published by Red Hook Studios. It is currently available on PS4, Vita, Switch and PC. This copy of the game was obtained via publisher and reviewed on the Switch. Approximately 10 hours of play were devoted to the single-player mode in this version (50 hours spent on the PS4 version) and the game was not completed. Yet. There are no multiplayer modes.

Parents: According to the ESRB, this game is rated T and contains Violence, Blood, Sexual Themes, Partial Nudity and Language. There’s lots of swordplay and firing of guns, but the animation is minimal and it’s all very stylized. The sexual themes are a few lines in reference to the brothel in town, and the partial nudity is in relation to one female character who goes topless for brief periods of 1-2 seconds.

Deaf & Hard of Hearing Gamers: All text can be subtitled, and there are no audio cues necessary for play. It’s fully accessible.