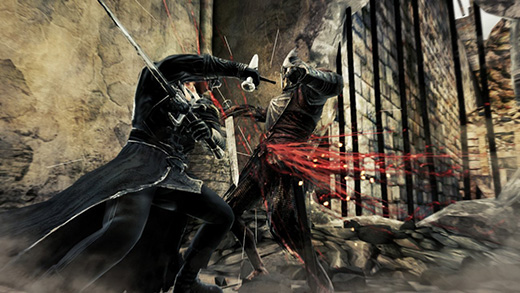 HIGH Conquering the Gargoyles on my own after countless defeats.

LOW Accidentally killing an NPC after 50 hours of trying to not kill NPCs.

WTF Why is it even possible to miss the tutorial area?

As a longtime follower of From Software's work in the gothic-survival-adventure genre that one might say King's Field and the Souls games fall into, it's always been an irritation that Dark Souls garnered so much praise and attention (it became an industry-wide descriptor!) while I see its predecessor, Demon's Souls, as the superior work.

I was disappointed with Dark for a number of reasons, primarily because its second half felt rushed and unfinished, but also because of several iffy experiments with the formula. This combination resulted in a very uneven, often unpleasant experience. Clearly, someone at From must have shared those feelings because Dark Souls II

is a significant course correction away from Dark's template and back to Demon's. While I'm sure a portion of the fanbase is unhappy with this, for me it's like a wish being granted.

Kristin did a great job of outlining what makes this game so superb in her main review, and I agree with nearly all her points, especially when it comes to the increased accessibility. However, as she suggests, no one should mistake being accessible for being easy—removing arbitrary restrictions that don't enhance the experience isn't the same as dumbing it down. A huge example is the ability to respec.

The Souls games have never been overt (or even clear) about how their systems work, and in prior installments, people would have to start an all-new character if they made mistakes in allocating hard-won stat points. Considering how long and challenging these games are, it was an incredibly shortsighted decision not respectful of a player's time. Just adding this one thing in Dark Souls II eliminates needless rigidity, and it's smart to let players salvage a playthrough they might have messed up twenty hours before they grasped what Poise meant and how Covenants worked.

Another change that makes Dark Souls II a more approachable adventure is one that Kristin didn't mention—the philosophy of the level design. The tightly-interwoven, almost mazelike world of Dark Souls has been cast aside in favor of a hub system with branches extending outward from the center.

While Dark was able to pull off some neat topographical shortcuts that aren't possible in Dark Souls II, I think the trade-off was more than worth it. Not only does Drangleic make more sense conceptually, it's inherently more focused and supportive—once starting out on a given path, it's fairly easy to keep pushing forward without much danger of becoming frustratingly lost or wandering aimlessly. At the same time, the areas are open and rich enough to support plenty of exploration and backtracking, and the bonfire fast-traveling makes doing so a simple matter. If the player comes up against a boss that's too tough or they want to go back and search a promising nook in a ruin two areas back, they're free to jump around as they see fit.

Speaking of which, I must also recognize the beauty and appeal of Drangleic itself. From sinister forests and solemn marshes to crumbling castles and seas of molten rock, each area transitions smartly to the next, and the journey from the disgusting bowels of the earth to wind-swept peaks drenched in sunlight (and back again) is one that won't soon be forgotten. Of special note is the hub town of Majula, brilliantly designed as both a refuge from and the beginning of the game's horrors.

While each new locale remains as tricky and as deadly as they ever were, I adored the wide variety on display, and was glad to see that intensely dark areas occur only rarely. Crafting places that are difficult to see in takes no real skill, so From's designers flex considerable muscle by offering a full spectrum of environments. Of course, there are still creepy crypts and black holes to struggle through, but there are also plenty of well-lit areas where visibility isn't an issue. There's also a secondary benefit apart from the aesthetics—fighting in a wide-open wilderness space is totally different from close-quarters combat inside a castle, and the variation in tactics that occurs naturally in these environments was just as appreciated as their visuals.

On the other hand, the developers stumbled a bit when pacing the adventure. The explorable geography is unbelievably huge, and there are a few sticking points when the player will likely find themselves unsure of how to advance. That's even truer in the endgame. The adventure builds towards an obvious goal, and then bizarrely deflates the dramatic build-up by continuing on for several more sections. Worse, it puts forth a confusing set of tasks and then goes out on a disappointingly flat anticlimax. To be clear, it's not that these sections are bad, but they seem more appropriate as optional side areas rather than sequences that should occur immediately before rolling credits.

This strange stutter-stop at the end is my only major complaint, though. Despite the eleventh-hour oddness, Dark Souls II

remains an incredible achievement from developers who had me genuinely concerned after their previous entry. Seeing them return to form on such an epic scale is a wonderful thing—not only did they correct what Dark got wrong, they delivered the most polished and accomplished Souls yet. It's rare to see a developer look honestly at their own work and then implement so many substantial structural changes, but that's exactly what From has done here, and Dark Souls II is absolutely better for it. Rating: 9 out of 10.

Crofto – Funny you bring up Arkham Origins – I also saw that one as a reboot of sorts (Dark 1 was not great, and Arkham City blew) and I gave it a pretty favorable review except for the bugginess. ^_^ Anyhow, if you don’t like Dark Souls 2 that’s fine with me, but i don’t see any need to criticize it – IMO it’s a massive step up from Dark Souls 1, and takes a great formula and delivers an improved version of it brilliantly. I’m not saying I need a dozen more iterations by any means, but for… Read more »

I think another great thing about Dark Souls 2 that doesn’t get a mention is there are a few ways to progress to the end game. Chatting to a friend the other day, he described how he had trouble with some of the bosses, and hasn’t yet finished the game. He mentioned one called The Old Iron King… Of which I had absolutely no memory. “You know, in The Iron Keep, with all the Lava and Stuff.” “Huh?” “Huntsmans Copse? Harvest Valley?” “…..WHAT?!” I somehow managed to finish the game, yet missed all these enormous locations! It makes the game… Read more »

This is honestly the first review I’ve read that sees this aspect of Dark Souls II as an improvement rather than a step backward from the level design of its predecessor. As an Xbox owner, I haven’t had the chance to play Demon’s Souls, but I can definitely say that the mazelike, interconnected, largely vertical world of Dark Souls was by far one of the game’s highlights for me. It was a big part of what made the game feel like a contemporary Rogue-like, and was an utter joy to explore. Haven’t played Dark Souls II yet, but now I… Read more »

Still think there’s some massive double-standards in evidence over this title. Why does Arkham Origins get slated to high hell for being a copy & paste of Asylum and City, yet Dark Souls II is lauded for some in-game changes, but with the core game and design remaining essentially unchanged? Again, I would argue, it is purely because the Souls series is down with the gaming kids, so finding criticism with it is not in vogue atm. You can list as many tweaks as you like – I can do the same for Origins, no less – but the UI… Read more »

@TemplarGR I’m interested in what you find to be non “trial and error” gameplay in relation to Dark Souls. Doesn’t every game involve some level of learning from mistakes? You describe action games as rewarding “good reflexes and control skill.” Isn’t the player response of dodging, striking, blocking, and parrying exactly this? Dark souls certainly rewards the player for being an efficient combatant. Next you describe brainpower. Perhaps, if you got frustrated and only used walkthroughs, you wouldn’t have appreciated the puzzle of learning your opponents moves and being able to respond at the right moment with the right attack.… Read more »

to the extent that I wrote a third opinion on the Forums: http://gamecriticsdotcom.wpcomstaging.com/forums/showthread.php?t=25791 (plus many more thoughts in the forum thread to Dark Souls 2, which can be found here: http://gamecriticsdotcom.wpcomstaging.com/forums/showthread.php?t=20992&page=3 First 2 pages of the thread are mostly related to previews) While Dark Souls 2 is still a good game, I don’t think it’s a notable improvement on the formula and also not a step back towards Demon’s Souls. There are a number of annoying things where I found the new team noticed what elements fans liked of Demon’s Souls, but not fully understood why they liked it and… Read more »

I don’t understand all the hype and high scores these games are getting. First of all, i have not played Dark Souls II and i don’t intend to. I have played the first though, and to me it is one of the most overrated games of all time. A game with serious design flaws, basic game design flaws, that got perfect and almost perfect scores from almost all professional critics and a small but vocal fanbase. So, since the sequel is similar, i suppose most of what was flawed with the original remains, and yet this gets a 9 from… Read more »