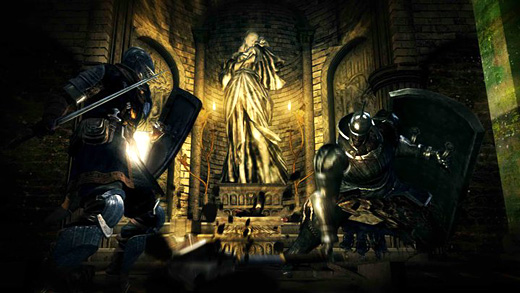 I'm still putting a lot of time into Dark Souls

. I decided to abandon my original Hunter and I've been focusing on my restart character, a Pyromancer. I've already surpassed the progress made on my first attempt, and it's only taken me about a third as long—the game goes quite a bit quicker once you know what you're doing. That said, at this point I think I've put (total) a little over fifty hours into it, and I'm starting to feel as though a short break might be welcome.

When I had played Demon’s Souls, I had completed the game for the first time around the fifty hour mark. According to some people I've spoken with, my current position in Dark Souls (Anor Londo) is only halfway, or even a little bit less. I don't know if that's exactly true, but any way you slice it, that's a pretty huge increase in size, even taking into account the fact that I restarted with a new character. All of that content has come at a price, though.

The shift into open world design shown in Dark Souls certainly has value, but I miss the smaller, more focused levels in Demon’s Souls. In that game, it was more about smart combat and survival than it was about covering overly-labyrinthine areas and trying to find the correct path. There was definitely still a certain amount of exploration, but not nearly as much as is present in Dark. In exchange for smaller worlds, the developers did a fantastic job of pacing the action and guiding the adventure while never leading the player along by the nose. It all felt superbly crafted.

In Dark Souls, there are certainly some moments that call back to the greatness of Demon’s, but there were also plenty of times where I didn't know where to go or what to do, and the intensity of the game started to lag. I also think it's less exciting that the game now feels like the player is going to certain areas for no other purpose than to get a key or some item at the end in order to unlock the next area. The boss battles are still a rush for the most part and some sequences are great, but the filler/adrenaline ratio feels way off compared to the first game.

While what I've just described is certainly subject to debate, what's not is that Dark Souls has some technical issues that sully the experience. The framerate takes a dip in certain areas (especially those that have water) and most famously in the Blighttown area. I've also noticed other weird things like enemies falling through the floor and out of the world after they've been dispatched, and the most irritating thing is that there is often a brief delay between when I hit the attack button and when the attack executes. Half a second may not seem like a big deal, but when the enemies are so lethal and I'm aiming for a brief opening in their defenses, having my character sit there like a target dummy and taking hits I never should've taken rubs me the wrong way. Having less-than-total control over my character in a game such as this is flat-out not acceptable.

I'm not trying to tear the game down because I'm certainly enjoying it and I'm very grateful that a sequel to one of my favorite games of all time even exists, but I can't help but think that it needed a little more polish and a little more playtesting to really be what it should. It's really good, but it should be better.

I picked up a stack of stuff recently, and most of it was pretty good reading… Severed and Screamland (Image) continue to impress, as does Witch Doctor (Skybound).

Looking at other publishers, I've never been much of a DC Comics fan, but they caught my attention with their New 52 line and I've been giving many of them shot. I have to admit, though, I'm more than a little confused as to what the concept was.

Before the launch, I was under the impression that these 52 new #1s would be clean-slate starts, and the perfect place for new readers to jump on. While that seems to be true for some comics, I don't think it is for all… some of the books I picked up definitely build on old continuity that I am not familiar with, and I'm puzzled as to why. I mean, they caught my attention and I paid my money, but if the only thing going on is that an old series is now renumbered, I'm not going to stick around. 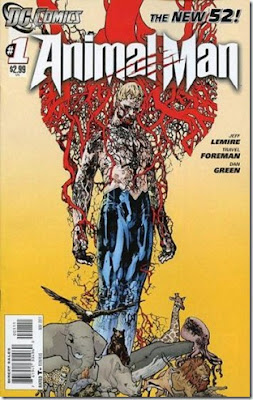 That complaint aside, some of these books are definitely worth checking out. The best of the bunch (so far) has been Animal Man #1. I've only been vaguely aware of this character's existence over the years, but this new book starts strong by giving a brief overview of the character, giving a quick demonstration of the character in action, and then quickly layering in a larger plot line and intrigue involving his daughter. This was some pretty adroit writing, and I'm definitely going to be following this book for while. 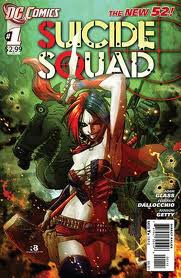 Another pleasant surprise was Suicide Squad #1&2. Again, this is a book I've heard of off and on over the years, but have never really read. Basically, a group of super-villains are recorded by a government agency to go on (wait for it…) suicide missions, and their cooperation is ensured by a bomb planted in all their necks. Fail to follow orders and BOOM. There is definitely a harsh edge to the writing that I appreciate, and their first mission (eradicating every single person inside a football stadium) was pretty crazy stuff. 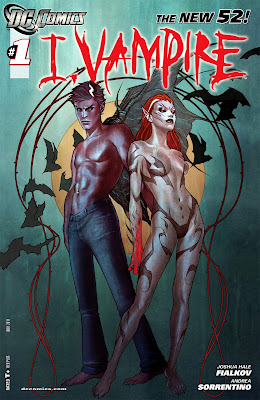 I, Vampire #1 is apparently about a couple of vampires who have a long-standing relationship. The female of the pair seems sort of "unleashed" and embracing her nature, while the male is apparently a vampire who hunts other vampires. The narrative wasn't quite as solid as I would have liked, but I think there is the spark of some potential here.

Finally, I also took a look at Batwoman #1&2. Although I have read several Batman graphic novels, I don't read his books regularly and I don't really have much idea of what's going on in Gotham city currently. Apparently, a lot. 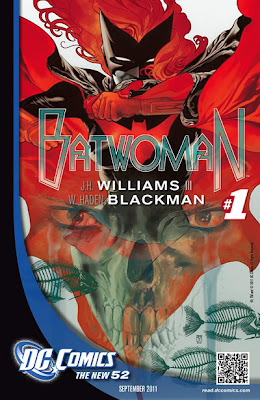 Batwoman is a very interesting character (competent superhero, lesbian, strong personality and unafraid to stand up to Batman) but I don't know much about her, who she is, or how she got to be Batwoman. There are several things in the book that appear to be references to past events, and I just don't know the history there.

This book is also quite interesting because the art style jumps back and forth between different modes. The coloring, specifically, goes back and forth between pages and gives the book a bit of an erratic feeling. On one page, it's vaguely watercolor-ish, on the next it seems to be Miller-esque, while Batwoman herself often has echoes of Steve Rude. Layouts of the pages are often confused as well… panel placement could be clearer at times.

I'm quite puzzled by the visually schizophrenic presentation, but I am intrigued by the character herself and I'm definitely willing to go along for the next issues to see where it leads.

I love exploration in games, so I enjoy that aspect of dark souls a lot. My character is a wanderer – this is what i do, i just wander. It’s a huge breath of fresh air compared to the usual “follow the marker to your next objective” routine. I know my character is cursed, I know what I’m supposed to do in order to break that curse, that’s all I need. it’s like searching for the holy grail – you don’t even know where to look, but you need to have faith – you just try to find clues, and… Read more »