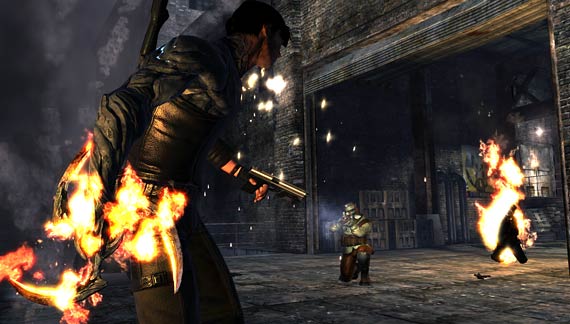 Having worked with Dan here at GameCritics for so long, sometimes it feels as though we think with the same brain. More often than not, we champion the same underdogs and see value in titles that others don't. However, there are rare occasions reminding me that as often as we agree, it's still a fact of life that we will occasionally take entirely different positions on things. Case in point: Dark Sector.

Quite honestly, I don't think we could be more at odds here. Having heard the early word and writing it off as not worth the effort, Dan's glowing review and positive comments about the game changed my mind.  Now that I've had the chance to play through the game, I can honestly say that my first instincts were correct.

More than anything else, Dark Sector is the ultimate example of the kind of title I discussed in my recent blog about substance over style. In effect, the developers have made a series of extremely outdated design choices (in addition to taking more than a little ill-fitting throw-it-in-after-we-started-development inspiration from Resident Evil 4 and Gears of War) and wrapped it all in a high-gloss exterior. It looks fantastic, but it plays like something that was old hat years ago.

For example, the "adventure" is little more than a series of pop-up shooting galleries strung back-to-back. The main character enters an area, hordes of enemies come swarming in, and the player eliminates them. New enemies run in, take the exact place of the dispatched enemies, and the process begins again. When enemies stop coming, the player moves on to the next area. Without exaggeration, that description pretty much sums up about 95% of the Dark Sector experience.

Dark Sector's big hook, the glaive, is pretty much a waste in my opinion. In fact, I'd say that the standard guns available have the advantage in every respect. I quickly grew tired of being required use the "power throw" feature in order to do any kind of decent damage on enemies, and the limited distance the glaive can travel before returning means that the player is better off trying to score headshots with a bullet on far-away enemies. Up close, the glaive isn't worth a damn. The melee attack is near-harmless, so when enemies rush in a shotgun is easier to use and mows the opposition down more efficiently.

I'm not going to say that the glaive isn't enjoyable—it is.  After all, throwing a spinning razor and then entering the player-controlled "aftertouch" mode to steer it into enemies never fails to bring a smile to my face, but the fact is that over the course of the game I consistently felt underpowered when relying on it, and usually got better results from standard firearms. For a game whose entire identity relies on this particular weapon, my opinion is that they should've spent more time on making it more worthwhile to use.

Although I found the asymmetrical bio-organic character design appealing and I can appreciate that the story almost came together, there are a wealth of other elements besides the combat and the glaive that simply don't work in Dark Sector. For example, the main character is supposed to be a lone agent battling his way through a large industrial wasteland of decimated Euro-decay, yet the developers thought it was a good idea to include a shop (conveniently located under any manhole) where the player can cash in rubles to purchase new guns and fit weapons with modifications. I hardly think I need to point out what an extreme conceptual inconsistency this is.

Furthermore, the level of interactivity in each area is minimal and navigation is unpredictable; even illogical at times. The main character can vault over certain low obstacles, but not others. There were more than a handful of occasions when I wanted to walk off a low ledge or climb over a small box in order to escape enemies, but the game would not permit the action to occur, and I still can't quite believe that the simple act of ducking isn't even an option if no cover is nearby.

Dark Sector may be a short game, but thanks to the simplistic and repetitive play, even this relatively brief running time felt bloated, tedious, and overlong. I really don't see anything in the game that merits a recommendation to anyone—just having a functional shooting engine and a weapon that's not a gun is hardly something to get excited about. Toss in the fact that the game's one claim to fame feels so gimped in comparison to weapons that every other game sports, and there's no reason left for Dark Sector to exist. I may like bits and pieces of the style, but I'm not at all impressed with the substance. Rating: 4 out of 10.

Disclaimer: This review is based on the Microsoft Xbox 360 version of the game.

Hmmm… seems strange to knock a shooting gallery game for being a shooting gallery game. I snatched it off Steam for $20 knowing pretty much exactly what I was getting into: shoot-’em-up with Gears-like mechanics and zombies. What more do you need to know? I think things like the black market market shop just fit into the comic-book styling of the game. It doesn’t have to make sense. This is strictly a brain-off shooter. Part of me actually wanted the whole game to be like prologue though. I dug the greyscale and the tactical-forces vibe. But monsters and zombies work… Read more »

very good review. Direct, to the point, intelligent. We need more like this.