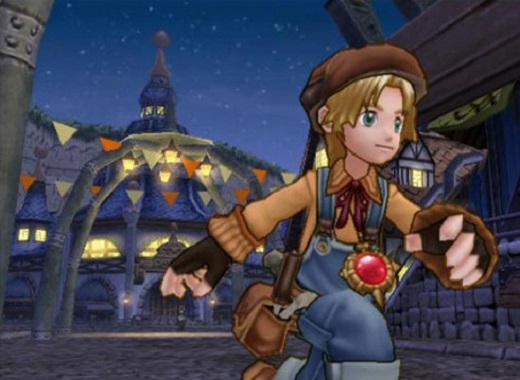 Sequels are generally a problematic proposition. A successful game or film always has fans ready to receive second or third helpings, but it's no secret that they usually fail to satisfy. This may seem puzzling since a sequel should be better than the original (in theory), but, as most people know, this is seldom the case. It's difficult to walk the line between keeping things familiar enough to avoid alienating fans and changing enough to prevent been-there, done-that syndrome. However, videogames have a special sort of leeway in this regard. Oftentimes a sequel will function as a "do-over" to correct problems without really needing to explore much new ground. In general, fans usually don't seem to mind, but that's the easy way out. Choosing to forgo this route and giving one of the most thorough overhauls in the history of gaming, developer Level-5 has taken the seeds from their less-than-stellar first effort and cultivated them into a wonderfully enjoyable and vastly superior tour-de-force.

Dark Cloud 2 is an amalgam of many different elements, but is an action-role-playing game (RPG) at its core. Starring young inventor Max and swordswoman Monica, the duo team up to thwart a foe from the distant past who means to rearrange the future. A central idea to Dark Cloud 2 is the concept of "origin points." Similar to other tales involving time travel, the theory is that by preventing certain actions from occurring in the past, you can alter the course of the future and change history. Max and Monica must restore the proper order of their world by taking action in the game's two main portions; combat and Georama.

The action part of the game is played from a third-person perspective with a semi-automatic camera. Players control either of the heroes in randomly generated dungeons several floors deep, with real-time battles. Using an efficient lock-on system, each character wields both handheld and projectile weapons in addition to a third form of attack: Max can pilot a mechanical robot called a Ridepod, and Monica transforms into several types of monsters. The combat is tight and blocking is important, although I wouldn't say that it ever gets very stressful or intense. Sporting a comfortable pace and easygoing level of difficulty, things in this area are handled in a very satisfactory manner.

The second major part of the game is the Georama system made famous in the first Dark Cloud. In essence, you build towns from the ground up and recreate origin points that have been erased. For example, to create a huge factory in the future, you need to construct metal houses and work equipment in the present, and then invite the right type of craftsmen to operate them. In this mode, the game goes to a PC-style "god game" viewpoint and utilizes a simple and efficient menu system. There's quite a bit of freedom when building, with options to assemble, disassemble, place, paint or modify your creations at will. Each dungeon floor holds a 'Geostone' used to unlock the different types of structures to make, so the deeper you delve in combat, the more you'll be able to do in Georama.

Besides those two main aspects, the game offers a wide array of unbelievably deep pastimes, each interesting and capable of eating up vast amounts of free time. This variety is definitely Dark Cloud 2's biggest strength. At the risk of sounding like the instruction manual, players can choose from a wealth of activities, the most nonessential being ricochet golf (called Spheda), or fishing and caring for your catch in an aquarium (or even racing them). More directly related to the game's story is the ability to customize and upgrade all of the weapons, or the choice to go for level-specific challenges such as not healing or using only items to clear the area. Max's Ridepod can be enhanced, and collecting all of Monica's transformations is a big task all by itself. The thing that makes all of this so remarkable besides the sheer amount of content is that it's so well thought out and smooth. Working towards getting the next weapon or Ridepod component becomes instantly addicting.

Quite literally, an ambitious player could potentially spend sixty, eightyprobably even a hundred hours in an effort to finish the game at 100%, and I haven't even mentioned the photography subquests and different types of inventions you can cook up. The amount of things to do in the game is nearly unbelievable. As for myself, it took me around forty-five hours to see the ending, and I felt as though I had barely scratched the surface of what the game has to offer. Bigger does not necessarily equal better, but in this case (since almost all of it is optional) it's up to the player to get as exactly as much out of the game as they desire. I might not have spent as much time playing these sidequests as I could have, but I'm quite glad that they're there—and that they weren't forced down my throat.

It's quite obvious that Level-5 spent a significant amount of time beefing up the gameplay, but it's slightly disappointing to see that the same amount of effort wasn't put into the storyline. It's not really bad; it's just a simple, standard affair that doesn't achieve much immersion or believability. I think a large part of the problem was that the time travel theme is never explored to any great extent, and is treated too straightforwardly.

In SquareSoft's Chrono Trigger (the premier time-traveling RPG), there was a very clear cause-and-effect relationship within the game's time stream. For example, being generous with a person in the past made them raise their children in a giving manner. Because of that outcome, a necessary item could be collected after going to the future because the person learned to give freely due to the player's actions. In contrast, Dark Cloud 2 has almost no human element of this nature, instead focusing on a more physical-object orientation. Structures in the future may vanish or reappear, but there seems to be no apparent change to the people, their personality or behavior outside of a few brief bits of dialogue.

On the same note, there are gaps and continuity contradictions evident throughout the plot. In one instance, a character says, "my origin point has been erased." If that's the case, then how can that character remember that it existed in the first place? How can he be standing there at all? Obviously, there are going to be conundrums that arise with any story involving time travel, but Dark Cloud 2 never gives the impression of tackling them seriously. It's fine as a low-cal fluff tale, but it could have easily been much more sophisticated while still retaining light-hearted appeal.

Besides that complaint, the game sails along marvelously except for a heavy reliance on dungeon crawling and a hateful last boss. Regarding the first issue, it's clear that the game revolves around gaining experience to tool with your items and the Georama system, but the way it was implemented didn't feel like a good fit with the rest of the disc. The dungeons are laid out in a segmented and discrete nature, giving them an artificial and "videogamey" feeling. The maps are not at all believable or organic. It wouldn't be such an issue except for that fact that you're going to be spending a huge amount of time in them, and they're all alike except for the dcor. Combing these cloned areas for keys and upgrade items over and over becomes tedious halfway through the game. I'd like to see this aspect reworked into something less incongruous for the future.

About the last battle, I feel obliged to mention it since most other reviewers either ignored it or didn't get there in the first place. After finding the game's first 99% quite mellow, I was totally blindsided by the insultingly cheap final boss. The ending combat sequence is one of the most infuriating and all-around bad ideas in recent memory, and I have no clue why Level-5 would choose to end such a wonderfully enjoyable adventure with this kind of arbitrary smackdown. Be warned. (Oh, and a word of advice—it's worth all the time and effort it takes to power up Max's gun. Trust me on this one.)

Taking into account everything the game gets right, it's not too hard to forgive a few missteps, and even that miserable boss. Dark Cloud 2 is so completely enjoyable and solidly constructed that it's a sheer pleasure to play. The game is even greater when you compared it to the extremely underwhelming original Dark Cloud. Level-5 receives my utmost respect for being able to step back and honestly reevaluate their formula instead of turning out a tweaked rehash like so many others before it. Dark Cloud 2 is the definition of what a perfect sequel should be, and an excellent game in its own right. Rating: 8 out of 10