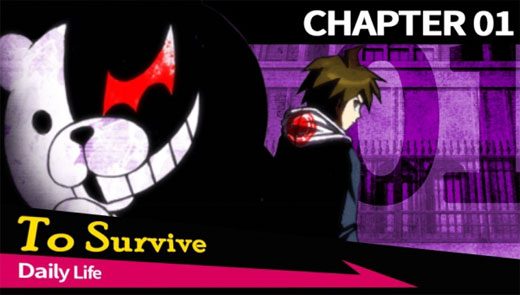 HIGH The rapid-fire energy of the "courtroom" arguments.

LOW Giving me a dialogue choice that I can't choose? Lame.

WTF The blood is… hot pink?

We don't get many visual novels here in the US, but one of the most notable was the original Phoenix Wright. I absolutely adored it and wanted more. Happily, the genre seems to be gaining ground lately, and I've tried a few others. Not so happily, almost all suffer from the same problems: flat, tedious writing and a profound lack of pizzazz in production.

Don't get me wrong, I have no issue with a genre built on reading text, but there's no reason it has to be boring. It doesn't require a million-dollar budget to make something peppier than a real book is, but recent titles don't seem to understand this. There's nothing worse than curling up with a visual novel in bed and then immediately falling asleep because it's all so slow and static. This is exactly why I loved Danganronpa: Trigger Happy Havoc

–once the game starts, it springs to life and there's never a chance of being bored.

Its premise is a strong one: a group of star students are sent to a preeminent academy, but on arrival they're locked inside. It's soon revealed that an insane mechanical bear controlled by someone in the shadows is in charge, and the only way to escape is to kill someone else and get away with it. It's horrifying, vicious, and… a darkly good time.

Although reading is what players will be doing throughout most of the game, Danganronpa's chapters are broken up into segments: free time, the setup, investigation, and a trial sequence where players have to solve the murder at hand.

Free time is a bit reminiscent of socializing in Persona. Players seek out other students and spend time with whoever strikes their fancy. Do well, and skills are awarded after learning a bit of their backstories. The setup phase is just what it sounds like – wheels are put into motion and someone ends up dead. The investigation tasks players with examining crime scenes and picking up vital clues. All of this feeds into the fast-paced, action sequences that make up the "trials" in which the survivors try to finger each killer.

While these courtroom-esque segments are reminiscent of the legal antics in Phoenix Wright, in Danganronpa it feels more dynamic and fluid. More than just pointing out inconsistencies, there are a series of minigames requiring both reflexes and clear thinking when stringing evidence and logic together. It crackles with excitement and charges ahead when the characters have large group discussions. Things fall into place quickly, and players will rarely get hung up trying to figure out how to progress.

That's not to say that it's a completely smooth experience, because there is one particular mechanic where the player must select a statement from another character and then re-use it on a different statement. It sounds confusing as I write it and the task isn't well-explained in the game, either. It's murkier than it should be, but I happily accept that one rough bit in exchange for everything else it gets right.

Besides the fast-paced trials, another area where Danganronpa excels is its production. Instead of dry still-pictures with text laid on top, the game has a brightly-colored visual style that takes no shame in rendering people and places as flat 2D objects that pop up as needed. Chairs and tables fall into place when entering a room, and when tilting the camera to the side, the surviving students are clearly paper-thin. It's a bit bizarre, but it absolutely works in giving the game its own style and tone. Going further, there are plenty of fully-animated cutscenes, the music is fantastic, and the voice acting is all quite good. Danganronpa is the perfect example of how good artistic direction can really bring something to life.

Of course, the core of any visual novel (naturally!) is to simply read the dialogue that happens between the characters, and all the production and minigames in the world don't matter if the script falls short. Fortunately, the writers have done just as well as the artists and game designers.

Although each character is based on an anime archetype — the fashionista, the otaku, the biker, and so on — the writing is sharp and often quite funny. The pacing is fast. Statements are short and relevant to what's going on at the moment, and the writers never fall into long stretches of tangential exposition. I also applaud the mysteries themselves – they're simple enough to figure out without an FAQ, but they had no difficulty in keeping me riveted as I tried to unravel the circumstances behind each death.

While generally superior to other visual novels in most ways, my only real criticism is that Danganronpa's ending falls into some anime tropes that the rest of the experience manages to generally avoid. I hesitate to say too much about its conclusion for fear of spoilers, but I will say that anyone trying to craft a good murder-mystery should refrain from using amnesia and/or the power of love and hope.

I don't want to get too hung up on that ending, though. Although it was a little weak, it certainly wasn't terrible, and it does little to take away from the otherwise outstanding experience that Danganronpa

is. It won't win over people who aren't already inclined to appreciate visual novels (because, you know, reading…) but for those who don't mind something a little more cerebral, it comes absolutely recommended. Rating: 8.5 out of 10

Disclosures: This game was obtained via publisher and reviewed on the Vita. Approximately 15 hours of play were devoted to the single-player mode, and the game was completed. There are no multiplayer modes.

Parents: According to the ESRB, this game contains: Blood, Intense Violence, Strong Language, and Suggestive Themes. Parents, no kids allowed here despite the bright, anime-flavored graphics. There's all sorts of bloody killing, sexual innuendos and salty language. It's a fab ride for grownups, but not at all appropriate for the wee ones.

Deaf & Hard of Hearing Gamers: Have no worries. All dialogue is subtitled, and all game elements are represented visually. It's fully accessible.

I know you must think I spoiled something there and I can see how you’d think that, but I guarantee that you don’t know how this ends. It’s really not a spoiler, but more a comment on some last-minute weakness in some otherwise excellent writing.

“I hesitate to say too much about its conclusion for fear of spoilers, but I will say anyone trying to craft a good murder-mystery story should refrain from using [what look like end game spoilers].”

Was really digging this review until the end. Did you seriously just reveal the end game plot? Stating tropes like that ARE spoiling if those things aren’t evident from the get-go, especially in a game that relies on its twists. Not cool, man. 🙁