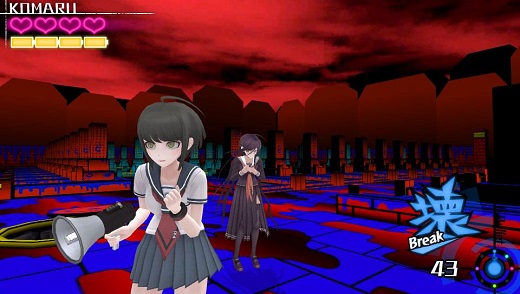 HIGH Doing one of Toko's fever attacks for the first time.

WTF There are some big questions left unanswered at the end.

It's rare that a series can produce a successful sequel while completely changing its genre, but that's exactly what Spike Chunsoft does with Danganronpa Another Episode: Ultra Despair Girls.

The Danganronpa visual novel series first made waves with Trigger Happy Havoc, and then followed up with Goodbye Despair—a second dose that was more than worthy. Rather than going back to the same design well for a third time, the devs reformatted their pitch-black themes and turned Ultra Despair Girls into a third-person shooter. Or perhaps it's more accurate to call it a third-person puzzle-shooter. Or maybe it's… Well, it's tough to describe exactly what it is, but it's definitely different.

The story is a midquel (is that a word?) set between the first and second Danganronpa titles, and stars Komaru Naegi, sister of Trigger Happy Havoc's protagonist. Her companion throughout the adventure is Toko Fukawa, a returning face from same. Since so much of the experience is story-dependent I'm hesitant to explain much. But, while I can't spill specifics, a good argument could be made for calling Ultra Despair Girls the darkest of the trilogy. Incredibly disturbing scenes crop up with regularity, and the script runs the full OMG gamut from straight-up mass murder to every form of child abuse possible. No punches are pulled.

On the other hand, the writers also spend unprecedented amounts of time on the positive relationship between Komaru and Toko. These leads explore their identities, their relationship to each other, and generally hash out what it means To Be A Friend. I can't think of any game that spends as many hours on two women speaking to each other about their own issues (while also touching on all the nasty stuff going on around them, of course) so I think it's safe to say that Ultra Despair Girls passes the Bechdel test with flying colors, and this is a good thing.

When it comes to mechanics, the shift to third-person gunplay works shockingly well, and provides a solid base for this sequel to rest on.

At the beginning of the adventure, Komaru receives a special gun that can fire several kinds of bullets, each with a different effect. Some do basic damage, some electrify enemies, some knock enemies back, some can take control of enemies, and so on.

With this weapon in hand, the main characters traverse the city and blast various kinds of Monokuma-themed enemies for a while, but there are also a great number of "puzzle" rooms where the various bullets must be used to pass tricky objectives. In one instance, a mob must be lured into a puddle before popping them all with an electro-bullet. In another, an enemy must be knocked back to trigger a deadly chain reaction. All of these gamey bits stick out like a sore thumb and don't mesh with the world in any believable sense, but they're enjoyably clever diversions that break up the standard shooting.

Speaking of the combat, I come to Danganronpa for its story elements, so I started the game on Easy and I'm glad that I did. Although some upgrades can modify the quality of the controls, the Vita's tiny sticks are generally not up to the task of precision shooting, and some enemy-heavy sections towards the end tested my patience.

In fact, some of the enemy swarms are so large that I ran out of bullets a few times. Without ammo, I would have been left in impassable situations if not for the fallback of Toko's melee combat. While its use is limited, Toko is invincible when she springs into action, and she can dish out quite a bit of damage. She saved my bacon more than once, so it was a smart move for the developers to include her as a backup.

Overall, it's safe to say that the thematic elements of the Danganronpa series are strongly represented and the switch to a new genre worked well. I wish I could end the review here and give it top marks, but Ultra Despair Girls actually has a serious problem—it's far too long.

The game offers a total of five chapters and an epilogue, but by the time I was starting the fourth chapter, I was beyond ready for things to be wrapped up. Unfortunately, there was a lot left to go, and the momentum of the plot came to a stuttering stop. Part of the issue is that some of the shooting feels like needless padding, but the story also loses steam when it should be building up to a fever pitch—certain points get repeated ad nauseam, some late-game discussions feel too frequent and out of place, and things generally take too long to get where they're going. I couldn't put my Vita down for the first two Danganronpas, but Ultra Despair Girls had me screaming for an editor's red pen.

Danganronpa Another Episode: Ultra Despair Girls could've been a dynamite ten-hour experience. Unfortunately, it clocks in at about twice that length and runs out of gas long before credits roll. However, spending time with Komaru and Toko remains worthwhile despite the filler and late-game sluggishness, and this genre-switch is definitely a must-play for series fans. It should have been tighter, but it's still Danganronpa, and that's always a good thing. Rating: 7.5 out of 10


Disclosures: This game was obtained via publisher and reviewed on the Vita. Approximately 18 hours of play were devoted to the single-player mode, and the game was completed. There are no multiplayer modes.

Parents: According to the ESRB, this game contains: blood, sexual content, strong language, and violence. Despite the semi-cartoonish appearance of the graphics, this one is as dark and mature as they come. Discussion of child abuse in all varieties frequently crops up, in addition to countless instances of torture, murder, sexual innuendos and basically everything parents don't want their kids exposed to. It's absolutely not not not for the kiddies.

Deaf & Hard of Hearing: Hate to say it, but there are major problems here. None of the animated cut-scenes have subtitles, and in a story-based game like this, that means lots of important info is not accessible. During battle, enemies often sneak up on the player with only sound cues announcing their presence, which means plenty of surprise damage being taken by players with hearing impairments. As much as it pains me, I have to say that players who have hearing issues should stay away until the game gets patched with subs and visual cues, IF that ever happens.

Seems weird to judge a game like this. Tick off a box for adhering to some arbitrary measure of equality.

I happen to like stories with female characters, like the animated films Whisper of the Heart or Only Yesterday, which are two of my favorites. But I don’t feel I’m superior for enjoying a story with flesh-out female characters. It’s just the kind of story I like.

I’ll probably like this game’s story and characters, but the rationale you put forth for why it’s good is cringe-worthy.

Thanks for the review. It’s too bad they stretched the game length like this. Sounds pretty bad when you say you were ready for the credit roll after only 3/5 of the game. I really liked the first Danganronpa, but did not finish the second one, loosing interest after opening the 4th island I think. So most likely this new game is not for me then.