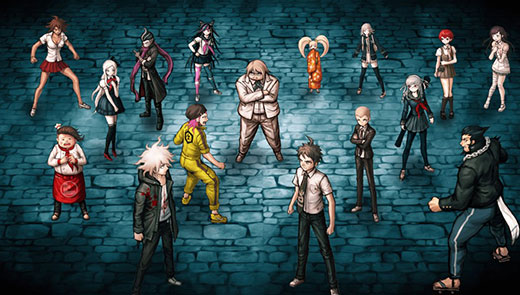 HIGH The last chapter is amaaaaaaazing.

LOW Getting stuck on a super-simple puzzle in Chapter 4.

WTF I was actually happy to see Monokuma. What the hell is wrong with me?

It may come as a surprise to some, but the Visual Novel genre is finally gaining some ground in the US, and I couldn't be happier. Phoenix Wright made a big splash, Hakuoki has found fans, and my personal favorite, Danganronpa

, has come screaming to the fore with not one, but two top-notch games released in the same year.

For those who missed it, the first Danganronpa (Trigger Happy Havoc) was about a group of star pupils locked inside their high school. Their only means of escape was to participate in a game of murder-your-fellow-students orchestrated by a maniacal stuffed bear named Monokuma. It was exciting, blackly humorous, and kept me on the edge of my seat. Goodbye Despair continues that storyline, although exactly how it relates to the original is a question that I won't ruin here.

In fact, talking about the plot in any depth is quite difficult for fear of spoiling the many multilayered mysteries that make up its running time. The basic premise of students-killing-students is the same, except now it's set on an island and the cast is entirely new, save for the return of everyone's favorite sadistic stuffed animal. However, what I can say is that while the game starts off with more than a few notes of déjà vu, the writers fully own it and let it simmer before letting their grand design blossom.

…And what a blossom it was.

In my review of the original, the only real complaint was that the ending felt too soft and tropey for what was an otherwise dynamite experience. Goodbye Despair not only addresses that criticism, it goes on to deliver an absolutely mindblowing finale. While the full ‘OMFG' factor of the wrap-up will only be appreciated by those who've finished Trigger Happy Havoc (and my advice is to absolutely start with the first) my guess is that those who did will be as impressed as I was with the sequel's endgame.

Structurally, Goodbye Despair is essentially the same as its predecessor. Since it's a Visual Novel, reading is what players will be doing throughout most of the game, and Danganronpa 2's chapters are still broken up into segments: free time, the setup, investigation, and a trial sequence where players have to solve the murder at hand.

Free time is reminiscent of socializing in Persona. Players seek out other students and spend time with whoever strikes their fancy. Do well, and skills are awarded after learning about their backstories. The setup phase is where someone ends up dead. The investigation tasks players with picking up vital clues. All of this feeds into fast-paced action sequences that make up the "trials" in which the survivors try to finger each killer.

While these courtroom-esque segments are reminiscent of the legal antics in Phoenix Wright, in Danganronpa it feels more dynamic and fluid. More than just pointing out inconsistencies, this series of minigames (both returning and new) requires reflexes and clear thinking to string evidence and logic together.

That said, things do feel a bit too complicated at times, and some of the mechanics are less welcome than others. For instance, I'm not a big fan of the "Panic Talk" segments that come off like a simplistic rhythm challenge, and knowing when to select someone's spoken phrase instead of the preselected phrases the game provides (it's confusing, don't ask…) is still a bugbear. Even so, shattering contradictions and constructing a case against a suspect never fails to be dramatic and suspenseful.

Besides the dynamic trials, another area where Danganronpa 2 still excels is the production. It's undergone a number of UI tweaks and minor changes that make it smoother to play, its brightly-colored world and character design are still strong, the music is fantastic, there's a big pile of content and extra modes to unlock, and the English voice cast is excellent. (The original Japanese vocals are available for those who want them, though!)

Of course, a Visual Novel's trappings mean nothing if the script can't hold its own, but as I alluded to earlier, the writers have outdone themselves. Not only are the new faces all distinct and memorable (Nagito Komaeda is a special standout) but the pacing is fast, the murders are puzzling, the plot never veers off into irrelevant tangents, and there are several laugh-out-loud moments. I frequently found myself taking screenshots of good one-liners and scenes that made me smile. Forcing myself to not immediately share them over Twitter was a difficult exercise in restraint.

Although I'm desperate to celebrate the juiciest bits of Danganronpa 2: Goodbye Despair

, the best I can do in this review is to give it my highest possible recommendation. It's a must-play for Visual Novel fans, and those who enjoyed the first year of the deadliest high school ever will find that the return trip is even better. Monokuma might be an absolute bastard, but if his games keep being this good, he's welcome to re-enroll me any time. Rating: 9 out of 10


Disclosures: This game was obtained via publisher and reviewed on the Vita. Approximately 18 hours of play were devoted to the single-player mode, and the game was completed. There are no multiplayer modes.

Parents: According to the ESRB, this game contains: blood, intense violence, strong language, and suggestive themes. Parents, no kids allowed here despite the bright, anime-flavored graphics. There's all sorts of bloody killing, sexual innuendos and salty language. It's a fab ride for grownups, but not at all appropriate for the wee ones.

Deaf & Hard of Hearing: Have no worries. All dialogue is subtitled, and all game elements are represented visually. It's fully accessible.