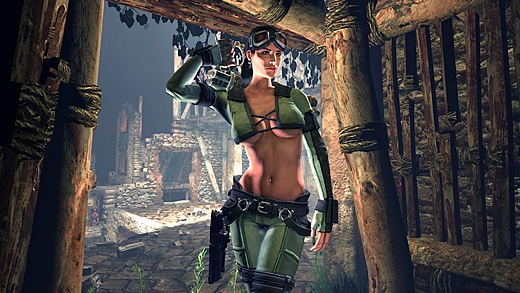 LOW Limping through a boss battle while painfully low on ammo.

WTF Potted meat factories… For the sick and elderly?

Reviewing an older game outside its context is a difficult task that can require a fair amount of research in order to understand how it was received at the time, and why. On the other hand, playing something without much foreknowledge can be a great way to evaluate its true worth. Freed from time pressures or competing influences, it's common for something that was "fantastic" to be later seen as less so, or the other way around. In the case of Damnation

A quick look at Metacritic reveals the game rocks an embarrassing 36 on consoles, and the reviews turned in at the time are beyond scathing. Common consensus from people I asked was that it was pure garbage, with little qualification. When I went to buy a used copy at GameStop, the clerk at the checkout counter actually told me not to buy it.

Although I'd heard nothing but negativity on Damnation, it was one of those enigmatic titles that I've picked up from a shelf and put back a million times. It had that certain something that I couldn't ignore, and I was repeatedly tempted to throw a fiver at it and check it out for myself. It may have taken a couple of years, but I'm glad that I finally did. Although it was a rough experience, it was far from being the steaming pile that I was led to expect. In fact, it's a great deal better than it gets credit for.

The thing I found most interesting about the huge disparity between the reviews and my own take is that many of the writers took it to task for having poor shooting mechanics and low production values. I don't argue either of those points, but at the same time, I think it's quite myopic to crucify it for those things while completely ignoring what Damnation does well—it has a unique, hybridized setting, unconventional game design, and some satisfying environmental traversal. It's not a finely-polished triple-A blockbuster, but it's hardly deserving of the toxic reputation it's been saddled with. 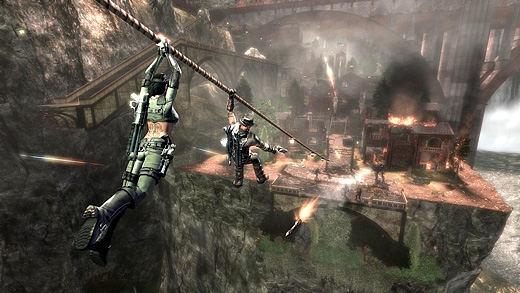 I'm definitely a fan of genre mash-ups, so Damnation's mix of Steampunk, Civil War, Wild West, and Native American influences (plus robots and airships!) was impossible to resist. This ingredient-rich setting is the perfect starting point for a plot that centers around a scientific genius taking over the country thanks to his technological advances, and the pursuit of progress at all costs quickly turns dark and oppressive. A small group of heroes is the only hope of resistance, and they fight the good fight to save the day.

While I would have enjoyed seeing a little more from these characters or even some team management when back on the airship, what's actually in the game is respectable. Each character has an appropriate backstory to give them motivation, they have relationships with each other, and there was a surprising amount of dialogue throughout the campaign, much of it cropping up during gameplay. Each castmember had their own style and personality, and I found them appealing overall.

Regarding the overall design, Damnation has much in common with the kind of concepts and spirit found more frequently in the previous generation—an era where players would be treated to the likes of the first few Tomb Raider entries, Galleon, and perhaps even Project Eden.

The quality that these titles have in common is that the developers craft huge, fairly open areas and let players find their own way. Of course, there's a method to how this kind of level design works, but it tends to suggest that the player can explore any corner of their surroundings, or travel to any place they can see with very little handholding or signposting.

Despite sporting fairly rough graphics, the levels in Damnation are enormous and display some incredibly sweeping scenery and awesome vistas. They're not just backdrops, though. Most of the far-away villages or deep valleys actually exist within the game, and must be crossed, in service to the philosophy just mentioned. More than a few times I had a genuine "Oh s***" feeling when I realized that the massive landscape before me was, in actuality, a navigable area. Damnation doesn't just have this openness in common with those other games, it's also very much about climbing, jumping, and traversing a vertically-oriented world. 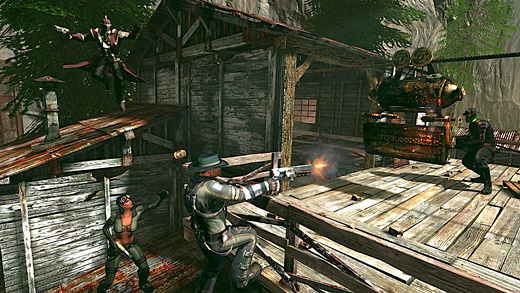 Every area has a healthy amount of ledges, buildings, scaffolding, and other structures that must be climbed in order to progress. Quite unlike some recent titles which prevent the player from ever falling to their death, Damnation leaves it in the player's hands to gauge which jumps can be successfully made, and which ledges can be scurried across in order to reach the next pathway above. I found the climbing to be solidly dialed-in, and simply working my way across a mountain or squirreling up a complex series of ladders suspended above nothingness was satisfying.

With a favorable cast, some pleasingly old-school design and a lot of environmental traversal challenges in the plus column, it didn't take me long to warm up to Damnation and appreciate what its developers had done. That said, I'll be honest in addressing the gunplay which bothered so many reviewers—it is quite poor, and I wouldn't recommend playing on anything but Casual. It's difficult to track targets, guns are inaccurate and can kick, and enemies are sharpshooters. Relying on the AI companions to compensate for this shakiness is a great strategy, and many encounters can be avoided altogether by choosing alternate routes. It doesn't excuse the subpar shooting, but then again, I wouldn't say that shooting is the focus of this title.

Apart from the gunplay, the only thing I can fault Damnation for is that it probably didn't feel "next gen" enough when it was released. I've read a few reports which estimate that work on the game was originally started in the PlayStation 2 era, and that wouldn't surprise me a bit. It doesn't look at all like a native PlayStation 3/Xbox 360 game, and lacks many of the niceties commonly expected of such. I can see how players used to current titles would be put off by the production quality here, but being very familiar with older games (and having a tolerance for them) I wasn't bothered.

When all was said and done, I was glad to have rolled credits on Damnation

. In spite of all the rough edges, the vision it was trying to realize is clear to see, and environmental traversal gameplay is a kind of content that I've always enjoyed. It may feel a bit out of place on current hardware, but viewing it as something of a "lost classic" from the last generation affords it a more appropriate context to be judged in, and a more comfortable one to be enjoyed with. Rating: 7.0 out of 10.


Disclosures: This game was obtained via retail store and reviewed on the PS3. Approximately 12 hours of play were devoted to the single-player mode, and the game was completed. No time was spent in multiplayer modes.

Parents: According to the ESRB, this game contains blood and gore, language, violence. The ladies are busty, there are some gross, bloody bits, lots of shooting goes on and some salty language flies. It's not anywhere near the most intense stuff I've seen, but this one's still aimed at older players. Divert the kiddies elsewhere.

Deaf & Hard of Hearing: All dialogue is subtitled, but I did notice that sound can play a role in telegraphing the presence and location of enemies. It's not a huge factor, but it's there. Hearing-impaired gamers can compensate with more frequent usage of the "spirit vision" and there are onscreen indicators for enemies as well. It's very playable without the sound, but be aware.

I played it on PC and didn’t have any trouble aiming. 0-o

I could care less about contextual time events, give me the facts inflamed by your opinions.

BTW have you reviewed Infernal? While a tad bland the Dialog is so bad its good and the AI is not a total loss neither are the weapons. Tho get the PC version the console version is a messy port so I hear.

I wonder if this review will an effect on sales. Is it too late to add a back of the box quote?