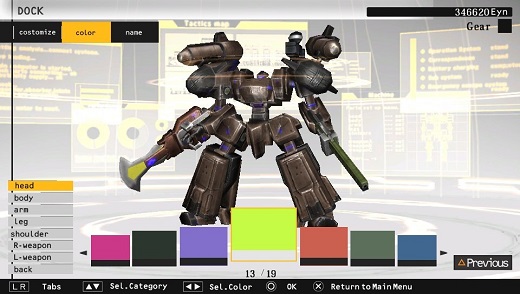 HIGH The first time I fired a back-mounted cannon.

WTF What's up with the weird text spacing?

It feels like it's been a long time since we've had a good, solid mech game on any platform.

Fromsoft (everyone's favorite dev after the success of Souls and Bloodborne) were formerly known for their Armored Core series, a mission-based title based on mixing and matching parts to create killer fighting machines. Unfortunately, the series fell prey to sequelitis years ago, and nothing else has taken up a similar banner until now. Damascus Gear actually has quite a bit in common with the glory days of Armored Core, albeit on a much, much smaller scale.

As the game begins, the player is given a giant mechanical suit and introduced to a world which is on the brink of extinction. Military robots have become autonomous and are destroying everything, so it's up to the player to fight back in a mech of his own. However, the story only plays a tiny role in the game, little more than a nudge to get things rolling. No, the real meat here (small portion that it is) is in building a robot and taking down the opposition.

Damascus Gear plays from a top-down perspective, very similar to Diablo or the like. Interestingly, the game says that the player's view on the Vita's screen is what the pilot inside the cockpit is also seeing. It has absolutely no effect on gameplay, but I thought it was a fresh little conceptual twist.

Combat is simple, yet satisfying. The player's robot is humanoid, and can be equipped with a right hand weapon, left hand weapon, and another weapon on the back. A wide range of firearms, melee weapons, and really big cannons are available in the shop or picked up from fallen foes, and hordes of hostiles go down with little opposition. Bosses are a different story. In stark contrast to the smaller enemies, boss mechs can tank like crazy and these encounters quickly turn into battles of attrition. These bits are a bit of a slog, the game is quite generous with the ability to fully heal for survival, and the healthpacks required are available for a pittance.

While the combat is pretty standard, Damascus Gear stands in its level of customization. Although it's not as detailed as Armored Core, the player's still able to swap out hands, torsos, arms, legs, heads and more. Power output and weight distribution is streamlined, and rarely are they much of a hassle. I was actually quite impressed with the amount of gear available, and the gearhead in me had a great time tinkering towards a mean killing machine.

Unfortunately, despite the appeal of crafting my mech (and for me, that's a big, big draw) the adventure feels monotonous too soon, and there's not enough variety in the types of missions or maps. Within an hour or two, I felt as though I was running the same missions in the same places over and over, which is a shame in comparison to how generous the customization options are.

Damascus Gear: Operation Tokyo kept me busy in short bursts, but I only got halfway through the campaign before I'd had my fill. It's great for 5 or 10 minutes at a time, but without more combat depth and variety in mission and level design, it's a good first start that's not quite ready for prime time. Rating: 7 out of 10.


Disclosures: This game was obtained via publisher and reviewed on the Vita. Approximately 8 hours of play were devoted to the single-player mode, and the game was not completed. There are no multiplayer modes.

Parents: According to the ESRB, this game contains: violence and language. The graphics are tiny and the dialogue is minimal – I can't recall any questionable language. There's nothing to be worried about here.

Deaf & Hard of Hearing: No audio cues are needed for successful play. It's fully accessible.

I never really got into mech combat games and this is one of the big problems I have with the genre – it can become repetitive very quickly. Not really worth the effort crafting your mech to be as streamlined and deadly as possible when you just keep going through the same mission types in the same maps over and over again.