Proving that horror isn't based on guns and gore 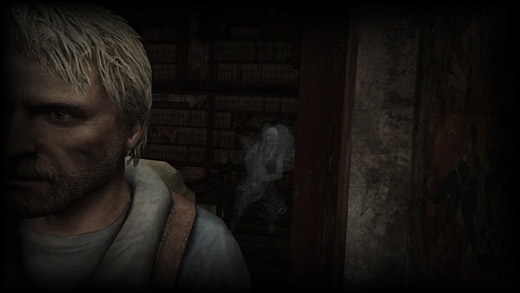 HIGH Refreshingly different and mature on a kid-centric console.

LOW The lack of play variety may put off some players.

Players who favor the scary side of gaming may have been finding themselves quite disappointed lately. In recent years, horror has been almost completely supplanted by survival horror, and although related, they're not the same thing. For example, I don't believe that packing big guns and spending my time scrounging for ammunition are necessary for a frightening experience. In-your-face levels of explicit violence and piles of dripping gore aren't, either. Although I can certainly appreciate the more bombastic side of the spectrum, I don't want the understated, more cerebral approach ignored at its expense. I believe those types of subtle, quietly frightening games still have their place. Evidently, Deep Silver agrees.

Taking an entirely different path than recent survival horror entries like trigger-happy Resident Evil 5 or alien dismember-fest Dead Space, Cursed Mountain is the lonely tale of a seasoned mountaineer named Eric Simmons. Suggestive and atmospheric where other games trot their sanguine wares out on full display, Eric's goal is a simple one; to discover what happened to his brother Frank. Also a climber, Frank was hired to retrieve a sacred artifact at the top of a remote summit. Instead of returning from the mountaintop victorious, Frank disappeared. Soon afterward, an aether's worth of hungry spirits appeared and now ravage the villages below.

The premise I've just outlined could be taken a number of ways, but Deep Silver went with what was probably the most bold—forgoing the standard combat-oriented, locked-door scenario, Eric's path up Chomolonzo mountain is one of mood, atmosphere, and a constant questioning of sanity. Although some may claim that it's too linear and narrow in scope, in Cursed Mountain's case, the game is the journey itself.

I'm certainly no expert on Buddhism or Tibetan life, but to my eyes, Deep Silver has done an excellent job of capturing elements of the culture and crafted them into an immersive, convincing setting. Starting at a small town nestled in the rocky range's surrounding foothills, it's clear to see that setting rules all. Gray and cold, the decrepit buildings and ramshackle appearance of the lower dwellings soon give way to rocky paths, endless vistas, vertical spaces, and isolated monasteries sequestered far away from civilization.

It was easy to imagine the sort of hardscrabble life these people must lead in such harsh conditions, and the foreign iconography carries mysterious significance all its own, completely apart from the game's plot. These alien, yet entirely believable elements do a fantastic job of reinforcing Cursed Mountain's aim of keeping the player constantly off-balance and fearful by maintaining a toehold in the real world. Although I wouldn't say it was jolt-inducing or shocking in the way other, flashier games tend to favor, the overall sense of unease permeates the experience. 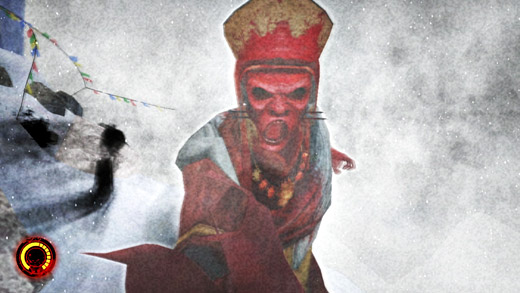 Though the setting itself is powerful, the quality that drives Eric's adventure further into the dark is the constant sense of self-doubt and insanity that dances around the edges of every scene. Thanks to some clever choices in visual presentation and the developers' choice to often strip away certain aspects of the player's perception, Eric's long, slow trek up the mountain often feels like a descent into madness. Is Eric sane? Can he believe his eyes? His ears? Is he imagining the events before him, or is reality truly falling apart at the seams? Certain moments capture the very Lovecraftian theme of man struggling against a hostile, malevolent universe, and it was a quality I savored.

As much as I admire Cursed Mountain—and I do—that's not to say that it doesn't have its share of issues. Primarily, the game's potential feels limited by underpowered Nintendo technology. Deep Silver did an admirable job presenting the unique architecture of the territory and teasing drama from the content, but there's no question that the project would be intensely stunning on a more powerful machine. I hesitate to even say it, but since so much of the game is based on environment and mood, there's no getting around the fact that the machine doesn't do the game justice.

Speaking of technology, I need to note that the Wii's motion-sensing abilities are an issue. When ghosts are encountered on the way up Chomolonzo's peak, the player can perform certain motions to put them to rest. Although I only died a small number of times due to my motions failing to register, it was always extremely frustrating to repeat the same sort of gesture over and over again, and have it work only half the time. For such a central, repeated function, the sensitivity fending off phantoms should be more dialed-in.

Production issues aside, I have to admit that I was also a bit puzzled at Cursed Mountain's pacing. The game gets a proper start and builds suspense admirably, yet just when I felt the game should be coming to its natural conclusion, there was still about a third of the adventure left to go. Unfortunately, things started to lag a bit in the tail end as I kept waiting for a resolution that was postponed a surprising number of times. I'm not sure whether the developers were nervous about having the game perceived as "too short" on top of all the other comments that were sure to be made, but I have to admit that the last leg's arc did feel needlessly padded.

Despite those issues, there is no question that Cursed Mountain is not only one of the finest titles currently available for the Wii, it's a welcome detour from the well-worn survival horror path that so many developers seem only too happy to tread. In my opinion, the pursuit of its unorthodox approach and its character's tenuous lucidity has paid off in spades to create a gripping, frequently brilliant title that is in no danger whatsoever of being mistaken for anything else. In today's too-safe, too-similar development environment, something that manages to be unique as well as successful should be recognized. Rating: 8.0 out of 10.

Disclosures: This game was obtained via publisher and reviewed on the Wii. Approximately 12 hours of play were devoted to the single-player mode, and the game was completed one time. There are no multiplayer modes.

Parents: According to the ESRB, this game contains blood, sexual themes and violence. Although I greatly enjoyed and appreciated this title, there is little question that it's absolutely not appropriate for children. Little ones will likely be creeped out by the ghosts, the specter of violent death is present throughout, and there are certain discussions of a mature nature near the end of the game that kids probably shouldn't be privy to.

Deaf & Hard of Hearing: You won't have any problems following the story since all dialogue is subtitled. The combat isn't an issue either, since nearly every encounter is prefaced by a clear introduction and telltale visual cues. The only problem I foresee some players having is that when the character is climbing vertical surfaces, the sound of ice cracking plays before he's about to lose his grip. There is no visual representation of the sound which may cause a few untimely deaths. However, if all climbing is done at normal speed (and not in the character's "rushing" mode) then fatalities can be avoided.

This was actually going to be my next review (I’ve sort of pledged to myself to review every game I play unless it’s super old), but upon re-reading both the original and second opinion, it looks like I have very little to add. There was one aspect of the game that really drew me to reviewing it though, so I still want to mention it here. As a survival-horror game, I found Cursed Mountain to be serviceable, but just barely. It wasn’t scary, and resources were plentiful. By the end of the game, every combat sequence boiled down to me… Read more »