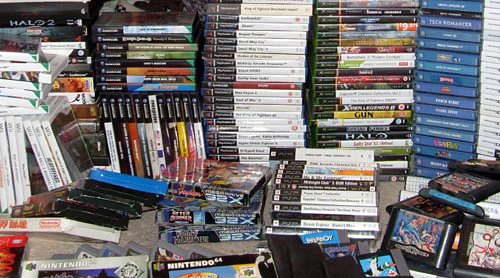 At the moment, I've fulfilled all of my GameCritics obligations and I'm just coasting for a couple of weeks. Although it feels weird to not have fifteen projects burning at the same time, it's nice to take a quick breather from the hectic pace—especially from all the madness that happens in the fourth quarter.

Personally, I'm not playing anything substantial at the moment; just a little of this, and a little of that. However, instead of starting up something big, it's usually around this time of year that I get the urge to go through my backlog and weed through the accumulated pile. I've got quite a bit of stuff stacked up, so I need to start deciding what I'm actually going to try to play, and what I'm never going to get around to. If nothing else, that "never" stack can stop collecting dust and be put to better use by being traded in for some credit towards a 3DS or a Vita…

Here's what's in the stack, not counting all of the XBL/PSN/WW downloads I haven't touched yet:

Sooooooooo…. I've definitely got a few ideas about which of these titles still hold interest for me and which don't, but I figured I would throw this list out to you, dear readers, and see if you have strong feelings about any of 'em, either positive or negative.

Are there some in this list I should absolutely get to? Are there some that I can toss aside without a second thought? If you've got any feedback either way, post a comment or hit me up on Twitter and let me know. The great purge hasn't begun, but the time is coming.

(Side note: I will weep tears of blood if/when we finally move to an e-only future and lose the ability to trade/sell games we don't want any more. Fizzical m3dia 4 lyfe, yo.)

Games talk aside, I'm a little ashamed to say that I did not meet my deadline for the edits that were due on my book this year.

I'm not trying to make excuses because I'm big believer in personal accountability, but with everything that was on my plate, it was just too easy to keep putting the book on the back burner and tell myself I'd get to it later. That's exactly what happened, and "later" was a while ago… hopefully the publisher I had lined up will still be interested, and if they are, I'll probably take this time between now and February to buckle down and get it done.

Otherwise, I've got a screenplay that I'll be shopping around and I'm considering starting a collection of short stories. The idea of starting and completing a tale in less than a year is starting to look more and more appealing these days… we'll see, though.  I'm trying to be much more realistic this year in terms of time management, so I think I will have to scale my expectations back accordingly.

I’d really like it if you’d review Resonance Of Fate at some point, simply because, even after finishing it, I still don’t know what to think of the game. I haven’t read any good reviews about it that go a bit more into detail of the game (not necessarily about the game mechanics) and about what it wants to be. However even though I was (and still am) generally interested in the game, I can’t say I enjoyed it. I only have the vaguest of clues about the game’s story and plot, because everything story-related is extremely hazy and at… Read more »

how can you start & quit bayonetta 3 times? as a pure action title, the game is stupidly brilliant, while the character & art style are up to personal taste, i guess (i loved it!), but how can you be so indecisive? just finish it already. okami: great game, but definitely too long, although you should be able to take around 20 hours less than your wife (i took close to 50 hours with a lot of essentially useless item collecting thrown in). also has some of the best boss fights i can think of. shattered memories might be the… Read more »

Dang, I wish I had your problem. My list of back logged games is just as long, but I am reliant on GameFly for my fix and the turn around for a game is a week plus in my neck of the woods. So, feel free to send those games my way… Actually just played through Super Paper Mario myself about a month ago. Great game, though a huge time commitment. I spent 18 hours on the game, with little exploration other than the main quest. Great tongue in cheek humor that Paper Mario pulls off better than quite possibly… Read more »

A boy and His Blob, MadWorld, and Red Steel 2 are worth finishing, with high levels of content enjoyment to time ratios. Mario Galaxy 2 is great, but a timesink. If you didn’t like de blob 2, don’t bother with the first. Super Paper Mario is great when you are not in the hub (which happens too much). The others aren’t worth it (unless you really liked no more heros, or are more interested in BB: Bash Party). Batman, Darksiders, Castlevania, Dead Space 2, Gears 3 are all worth it. I’d put La Noire, Metro 2033, Velvet Assassin, Singularity, Pinata… Read more »

For a really good, atmospheric experience that is not as lengthy as many games on that list, I would check out Metro 2033. Had a lot of fun in with that game. It would also give you a different, and possibly more realistic (though at the same time sci-fi) take on the whole nuclear apocalypse thing since you just got off of Fallout.

Also Bard’s Tale for the lolz

wow… that is one depressing list, lol. i do not envy you, Brad, if you do in fact feel obligated to play any of those games.

personally, i’d dump every single title on Amazon.com for credit towards a new TV and watch some movies instead.

speaking of TV’s, what kind of setup do you game on? is that sorta thing important to you?

None of that looks interesting. Makes my backlog look fun and exciting if you ask me. Not that I’ll ever get to that either. Stupid Saints Row 3 checklist of Challenges.