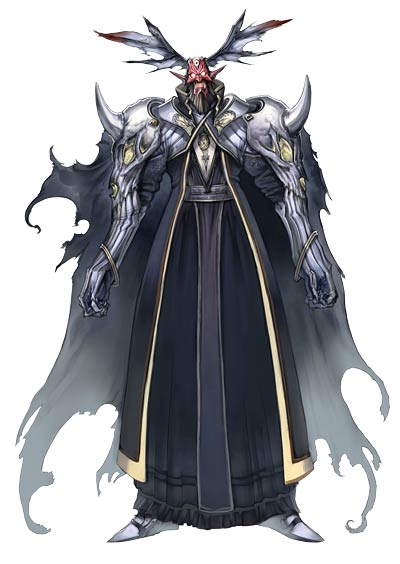 In this age of eye-melting blockbusters and ever-more complex ways to simulate real-world physics, it's refreshing to come back to something that flies in the face of current trends. Striking out in its own direction, I'm sure that the vast majority of 360 owners will take one look at Culdcept Saga, shake their heads, and move on to something that's pushing a lot more polygons and fits neatly into one of the established, popular genres. I can almost hear it now—"Rolling dice? Moving around a board? No thanks… I'll take another Military-themed shooter or one more driving game where I can customize the lugnuts on my car."

This title is not for those people.

Best described as the perfect fusion of board and collectible card games, Culdcept Saga draws heavy influence from a variety of sources, Monopoly and Magic: The Gathering in particular. There is a story mode in Culdcept, but it's patently insipid. Honestly, I suggest skipping the cut-scenes, pretending that the story doesn't exist, and jumping straight into the action. The disc's real draw is the sheer joy of playing a well-balanced, intricate, and hopelessly addictive game for its own sake, no lofty goal or deep philosophy required. The same way people will gather time and again for a smoke-filled evening of poker or a sunny afternoon of chess, Culdcept brings the same kind of gamesmanship to the 360, a perfect fit for its Live online service.

Play takes place on boards divided into squares with a variety of different paths and features, each space belonging to one of five categories: air, earth, fire, water, and a few oddballs like neutral lands, or lands that morph to accommodate their occupier.

The goal is to accumulate a set amount of magic power (i.e. money). This is done by capturing spaces on the board, deploying monsters you control to manage them, and then upgrading the value of the land. Every time you pass a castle (equivalent to Monopoly's "Go" square) the computer calculates the total value of your holdings and rewards you accordingly. Be the biggest land baron, reach the target goal before the competition, and the game is yours. 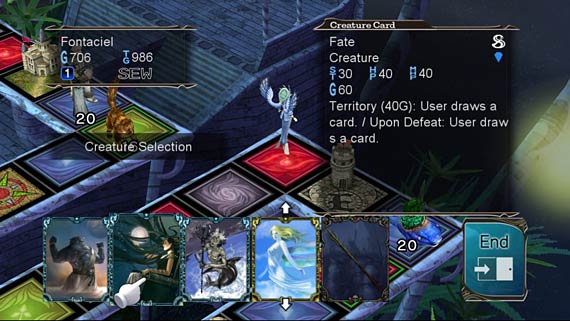 However, it's not quite as easy as it sounds, and this is where the "card" aspect of Culdcept comes in. In Monopoly, once a player controls a property, it's theirs unless they choose to sell, and there's nothing other players can do to change that. Culdcept takes a more pro-active approach with its monster system.

There are approximately 500 different cards in the game made up of creatures, weapons, armor and spells. Players create a deck of 50, and if they have a creature card in hand after landing on an unoccupied land, they can "cast" it to assert instant property rights. However, your opponents can try to steal the land from you by casting their own monsters and doing battle. The variety of non-creature cards come into play during skirmishes, adding strength and damage modifiers. If you mount a successful defense, the opponent pays your land's toll, increasing your "bank" and depleting theirs. If they win, you‘re booted out and you lose the property, along with any improvements you've made to it.

Effectively using Culdcept's cards requires multiple levels of strategy, and more than a little bluffing if you're playing with other people, in person or online. The choices made for your deck will play a large factor in determining your style, and knowing when to use modifiers is crucial since you never know when an opponent may have something to counter it, or if they'll even use it.

Matching the right kind of monster to the correct territory is also important, since each creature has their own favorite terrain. If they're on it, they receive damage bonuses to increase their potency, a huge advantage when fending off squatters. Finally, learning the ins and outs of each board plays a large part of planning where to stake your claims. Some squares will naturally be landed on more often, and knowing where your enemy is likely to stop can make all the difference—certain areas will be traveled more frequently, so not investing in "dead zones" of little action is the best bet.

Factoring in all these variables is a complex and delicate trick, but one that Culdcept Saga pulls off flawlessly, managing to avoid any major design issues or imbalances. I instantly fell in love with it all over again, causing my wife mild distress as I stayed up late into the wee hours of the morning a few times too many. 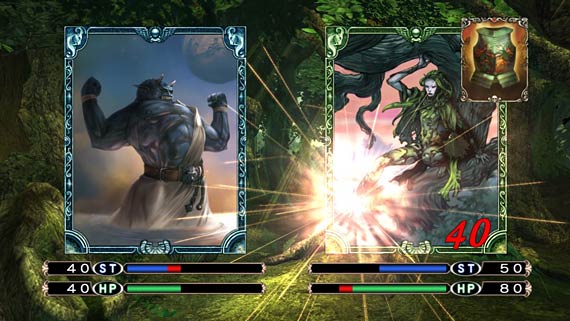 However, as much as I adore it, I would definitely say that it's a difficult game to master. There's a lot to learn about how the cards interact with each other, and overlooking a rule or forgetting about a certain creature's effect can be devastating when every single point matters. Making things even more interesting, the cards you receive are awarded on a semi-random basis, the A.I.'s ability to pull off questionable rolls of the dice might make you go prematurely gray, and the games tend to last around two hours (or more) apiece, so a cup of coffee is recommended to keep up mental focus for extended seesaw matches. Casual friendly, this game is not.

Besides the fact that players will have to invest a lot more time upfront in order to learn how to play, I'd imagine that some players might be put off by the graphics—but if you've read this far, chances are you're interested enough to avoid discounting the game for its PS2-era look. Personally, I had no problem. The creature models are detailed enough considering their size on the board, and emphasis is placed on keeping everything clear and easy to see—a wise decision. That said, each of Culdcept's cards features large, hand-painted works by some of Japan's top fantasy artists. Those who can appreciate portraits of deliciously zaftig succubi and four-armed sea turtles doing Godzilla impressions won't be disappointed.

Culdcept Saga is a true breath of fresh air. Via the electronic medium, it creates an enhanced experience that would be impossible to replicate on a tabletop with figures and a board, delivering something totally unique and captivating. It's without a doubt one of the most enjoyable "games" that embodies the classic conceptualization of the word. Add in mostly excellent multiplayer options (why can't you trade cards online?!?) and practically infinite replay value, and it's a must-own for those willing to invest a little time and effort into learning how it works. People expecting to jump in and rock might be disappointed, but approach it as you would a new board or card game and you'll be very well-served. Rating: 8.5 out of 10

I’m with Brad on this one. It’s a tough game to master, but it is highly rewarding for all the effort you’ll have to put into it.

I’d like to add that you really need to watch the tendencies of the NPC players. They’ll play the same strategy everytime, and you’ll have to balance your book to take advantage of how the NPC’s character plays.