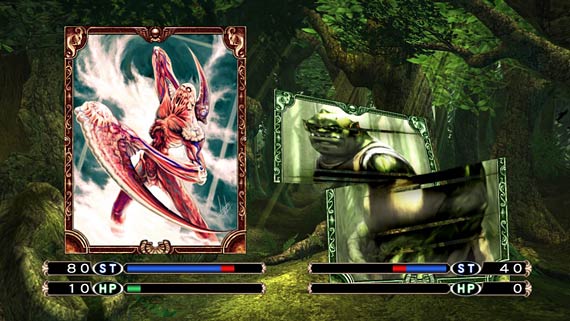 Parents don't have a lot to worry about, although they should be aware that a very small number of the cards do feature sexually suggestive artwork. Not at all explicit, it's more the curvy-girl-in-armor sort of thing. The game will probably be vastly too difficult for young ones anyway, so it might be a moot point. As for "violence," the ESRB mention is a joke—static pictures of cards get hit with disembodied claws or magically-suspended swords and crumble afterwards. I could recall no questionable language, and there's absolutely no blood or gore.

Fans of CCGs or Monopoly… this is your game. Buy it now. It's manna from Heaven if you're the type.

Multiplayer fans can play up to four people at once, both online or off. Team and competitive play is available with a multitude of settings (including adjustable bots), and trading cards is also possible—but only with memory cards in person. Boo!

Deaf and Hard of Hearing gamers will have absolutely no problems playing the game. Actual play does not rely on speech or audio, and is turn-based. It's completely accessible and totally Deaf-friendly.