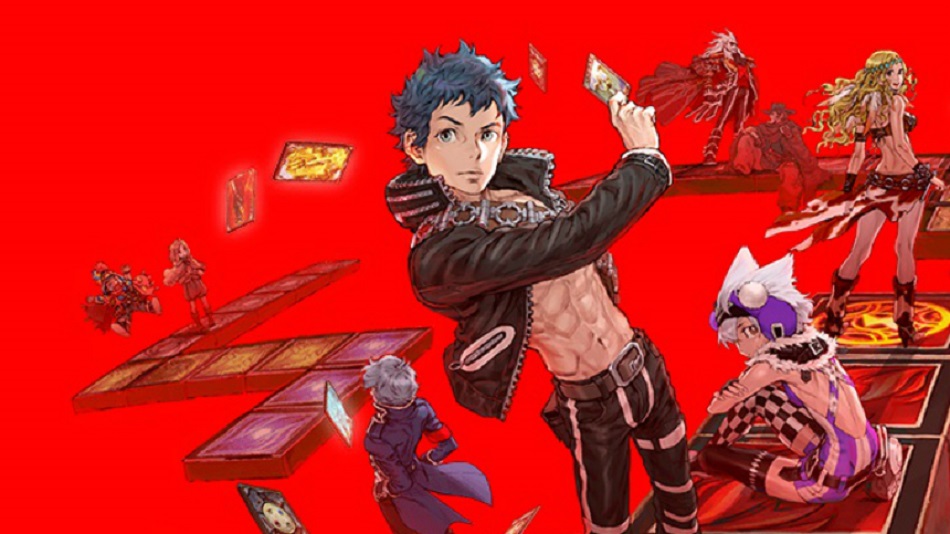 HIGH The Magic: The Gathering + Monopoly formula is awesome!

LOW The AI is out for blood.

WTF Being a series vet and still getting hammered by the first battle for hours.

I would imagine that most people reading this review have never heard of Culdcept, but it debuted in North America back in 2003, and it’s been a long time since the last installment – eleven years, to be exact. I’ve been a fan since the beginning and never thought we’d see another, but NIS America surprised the hell out of me with Culdcept Revolt and I’m glad that they did.

There is a story mode in Culdcept Revolt, but it’s lightweight JRPG fare and I wouldn’t recommend the game based on it. No, the real draw here is diving into the systems of play – the devs offer a deep and detailed fusion of board and collectible card games, best described as a perfect marriage of Monopoly and Magic: The Gathering.

Play takes place on boards divided into squares with a variety of different paths and features, each space belonging to one of five categories: air, earth, fire, water, and tiles which are neutral.

The goal is to accumulate a set amount of magic power — basically, money. This is done by capturing spaces on the board, deploying monsters to defend them, and then upgrading the value of each land. Every time the player passes a castle (equivalent to Monopoly‘s “Go” square) the computer calculates the total value of the player’s holdings and awards a commensurate amount of power. Be the biggest land baron, reach the power goal before the competition, and the game is won.

However, winning isn’t quite as easy as it sounds, and this is where the card aspect of Culdcept counts. In Monopoly, once a player controls a property, it’s theirs unless they choose to sell and there’s nothing other players can do to change that. Culdcept Revolt takes a more proactive approach with its monsters. 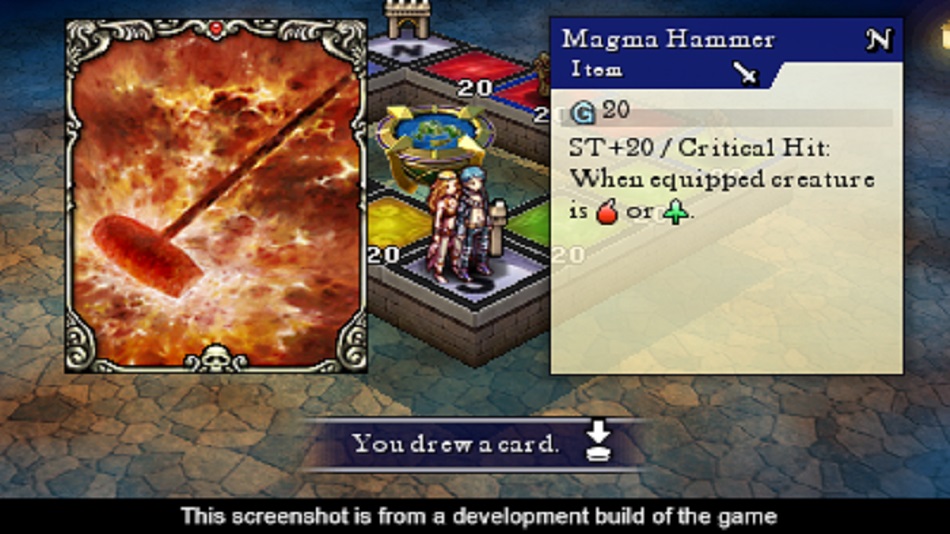 There are tons and tons of different cards available, coming in creature, weapon, armor and spell varieties. Players create a deck of 50, and if they have a creature card in hand after landing on an unoccupied land, they can “cast” it to assert instant property rights. However, opponents can try to steal the land by landing on the same space, attacking with their own monster and doing battle.

The non-creature cards add strength and damage modifiers, and the spells can surprise an enemy with all sorts of effects like instant-kill, damage reflection and more. If the defender is successful, the opponent pays a toll. If they win, the former owner is booted out and loses the property, along with any upgrades associated with it.

Playing Culdcept Revolt effectively requires multiple levels of strategy, and more than a little bluffing if playing with others online. The cards included in a deck can be built to suit many styles, and knowing when to use modifiers is crucial – just a few points of miscalculation in one fight can mean the difference between a decisive win and a staggering loss. Of course, learning the ins and outs of each board also plays a large part. Some squares will be landed on more often, and knowing where the enemy is likely to stop can make all the difference.

Factoring in all these variables is a complex and delicate trick, but it’s one that Culdcept Revolt pulls off… just not perfectly. While the tutorial is solid, there’s a lot to learn about how the cards interact with each other, and overlooking a rule or forgetting about a certain effect can be devastating.

This learning curve is already tough, but the AI makes it even tougher – Revolt’s difficulty is often brutal. Computer-controlled opponents have a too-convenient habit of skipping over a player’s high-penalty spaces, and the AI manages to have just the right cards in hand a bit too often. I was getting my ass handed to me on the first mission, and I’m a series vet who’s had tons of experience with previous entries. Scoring a win feels great, but be prepared for a lot of frustration along the way. Patience is a must.

While it requires a fair time investment to get sunk in and the AI could definitely stand to have its fangs pulled out, Culdcept Revolt offers a wonderfully rich tabletop experience that would be impossible to replicate on a tabletop. It’s unlike almost anything else available today. Rating: 7.5 out of 10

Disclosures: This game is developed by Omiya Soft and published by NIS America. It is currently available on 3DS. This copy of the game was obtained via publisher and reviewed on the 3DS XL. Approximately 8 hours of play were devoted to the single-player mode, and the game was not completed. 1 hour of play was spent in online multiplayer mode.

Parents: According to the ESRB, this game is rated T and contains Fantasy Violence, Language, Mild Blood, and Suggestive Themes. The ESRB listing itself says: This is a strategy game in which players assume the role of a rebel fighter battling for freedom against an evil force. Players engage in turn-based card battles on a game board against fantasy creatures (e.g., giant demons, dragons, ogres). Players take turns summoning creature cards that slash, stab, and claw at opponents; impact sounds and colorful light effects occur during battles. Some cards also depict violent imagery (e.g., creatures impaled by spears, lightning bolts). One red slime-like creature is referred to as a “Bloody Pudding.” Some female characters are depicted with exaggerated-size breasts and outfits that reveal large amounts of cleavage; a handful of creatures are shown with exposed breasts, though with no discernible details (i.e., no nipples). The word “sh*t” appears in the dialogue.

Deaf & Hard of Hearing Gamers: All dialogue comes via text and there are no audio cues needed for play. It is 100% accessible.

Does the game have a difficulty setting? Does it collect wins/losses or any other gameplay related stats (total time played, % complete, etc, etc). Is there an offline “sparing” mode where we can practice against AI, outside of the story mode? And are stats tracked in that mode (assuming that mode exists). OR is this only way to play this game in the “campaign/story” mode? Does it have a gamecomplete+ mode where you have restart the story after completing it, with all your attributes all still buffed up?

Hey Dave! Good questions. There is only one universal difficulty, so you can’t turn it to Easy — which I WOULD have done if it was possible. It does collect a bunch of play stats, so there’s plenty of info to gauge your performance by. You can practice against AI in one-off matches in addition to online and campaign. I have no idea if there’s a New Game + since I didn’t finish the campaign by the time this review was published but if it’s like the other entries, I would imagine you can keep playing infinitely after the campaign… Read more »