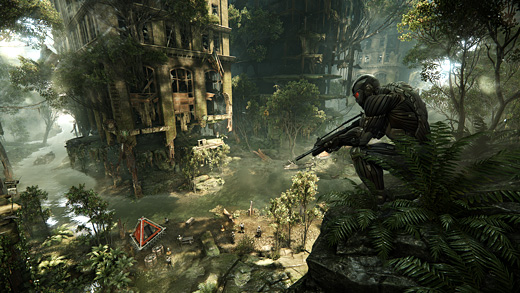 LOW The final boss is everything that's wrong with boss fights.

WTF I can't punch a thin wooden door down? This is still a thing?

When it comes to reviewing games, the only absolute is that no matter how good something looks or how good it should be, nothing can be safely assumed until a controller is in hand and things are happening on screen. Crysis 3

was a perfect reminder.

Although I didn't expect it to redefine the genre, I was looking forward to the sort of free-form, player-directed action that held my attention in Crysis 2. I enjoyed that title quite a bit since the ability to assault a zone my way was a satisfying experience. Guns blazing? No problem. Sneaky, silent kills? Also viable. Good times.

By starting with this enjoyable base formula and then slapping on a coat of "bigger, better, faster, more," Crysis 3 seemed like a surefire weekend of slam-bang action, except that… it wasn't.

Surprisingly, I was coldly indifferent to everything my superpowered nanosuit bad-ass was doing to the enemy troops and squishy aliens in his path, and despite the millions of dollars poured into its production, Crysis 3 failed to connect with me on any level. I never would have guessed it, but I couldn't be done with it fast enough.

To be fair, there's nothing tragically wrong or broken with the game. The console graphics might not stack up to the PC version, but they look fantastic on the Xbox 360 and it controls just as well as anything. The UI is fine, the standard variety of weapons is available, and all of the multiplayer trappings anyone could expect are present. All the proper boxes appear to be checked.

…And yet, this experience is a failure.

It's fine to shoot arrows into unsuspecting guards using the high-powered bow featured on the box, but that particular charm expires quickly. Once the whiz-pop novelty is gone, the campaign turns both predictable and stultifying thanks to an over-reliance on painfully tired design tropes, rote storytelling and minimal creativity. 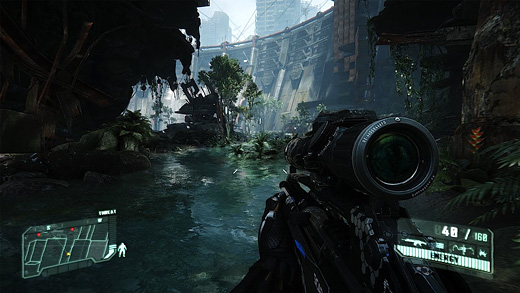 While the "play it how you want" concept would seem to suggest a modern style of thinking from the design team, that couldn't be further from the truth. Whether armored or cloaked, I constantly came across incongruous boxes of ammo scattered across every battlefield, random pieces of intel and suit upgrades to pick up, cheesy ziplines strung between sniper perches, and exploding barrels placed conveniently near enemy cover.

Those are hardly the only relics from the past. Vestigial elements abound such as flimsy wooden doors that can't be punched down with superstrength, unapproved leaping from a crumbling skyscraper is rendered impossible, and attempting to shoot down a pre-scripted helicopter with an alien lightning cannon yields no results. None of these things are particularly egregious sins, but they clearly highlight the kind of outdated, last-gen thinking that makes up the core of Crysis 3.

Even more damning, I rarely felt as though I was ever in charge of anything. Crysis 3 frequently takes control out of the player's hands when something besides shooting needs to happen, and it repeatedly made me feel like a spectator when I should be accomplishing heroic feats. The amazing escape from an exploding dam? A non-interactive cut-scene. Leaping off a building into the cockpit of a hovering VTOL? Sit back and relax, because the only option is to watch.

I might have forgiven those things and simply gone along for the ride if the characters, scenarios, and storytelling in Crysis 3 were halfway interesting, but these elements are, amazingly, even less inspired than the gameplay.

The sci-fi babble that passes for a script seems sketched by someone who recognizes the form a story should take, but doesn't understand what makes a good one engrossing, or even interesting. I frequently forgot what my objectives in each mission were, and every time a radio transmission came in with something to say, it never felt revelatory, or even relevant. It's the sort of substance-free campaign where the motivation is lost and progress only comes by constantly heading towards the next glowing marker because.

As the game went on, I could find nothing to connect with or savor—the design holds too many elements that defy immersion, and the narrative (not even worth detailing in this review) is about as exciting as reading the nutritional information on the side of a cereal box. While the Crysis team's ability to craft fantastic graphics is not in question, I don't see much else going on here.

It looks sharp and it may be perfectly serviceable, but with all of the other interesting things happening in video games right now, something as surprisingly soulless and rote as Crysis 3

has absolutely nothing to recommend it. Rating: 5.0 out of 10.


Disclosures: This game was obtained via publisher and reviewed on the Xbox 360. Approximately five and a half hours of play were devoted to the single-player mode, and the game was not completed. (The reviewer quit out of annoyance at the final battle.) One hour of play was spent in multiplayer modes.

Parents: According to the ESRB, this game contains blood, strong language, and violence. It comes as no surprise that a game about doing violent things is not appropriate for the kiddos.  The main character performs bloody stealth kills, dozens of soldiers will be gunned down, and there are no peaceful resolution options. The language is also quite salty, and some scenes might be seen as intense to younger players, so steer them clear.

Deaf and Hard of Hearing: Subtitles accompany all dialogue and there are numerous visual elements on-screen which cue players to the presence of attacking enemies. Audio cues such as ambient sounds aren't relayed visually, but with careful use of the "tagging" function and the incoming fire reticle, hearing-impaired players don't suffer much penalty during play.

What is with all of these triple A titles being such letdowns? All of that time and money spent on the Crytek engines and their games launch and are such bores. Its hella pretty to look at but where is the great gameplay that you’re supposed to get for the $60? Something has to give. Is this what we have to look forward to in the next gen?

I did not enjoy one single combat encounter the entire game till I quit close to the end of Crysis 3. Both types of enemies are not fun to engage with and there is no balance in the combat. You’re either too powerful or under pressure from God-like eyesight of enemies. The enemy A.I is stupid as f*ck. It can’t handle and never adapts well to my cloak or shield abilities. The bow is a power trip but it’s just stupidly overpowered. Kills with the bow and no diminishment of cloak is silly. Clearly its a case of poor compensation… Read more »

Well, if this article hadn’t explicitly said it, I would have thought you were talking about Crysis 2. I try to play it TWICE and I found it extremely bland and boring. Yes, the scenery is gorgeous and it’s mindblowing how the CryEngine can showcase so much detail without losing performance. But the narrative was incredibly linear and absurd and the silent protagonist really didn’t helped (specially considering that in the first few missions you are involved in a case of mistaken identity and, for some reason, cant just tell people that you are nor Profet). Anyway, since Crysis 2… Read more »

Don’t know why they still make games like this. It’s all glitter and no gold.

I am with you anonymous. AAA for me is a PR term that really only means higher than previous games production levels.

Most “AAA” are boring nowadays. Uncharted 3, Oblivion, Rage, Dead Space 3, and on and on the boredom rolls on.

I have not had a really fun time playing a game in years. Moderate enjoyment…. yeah occasionally, but that fun experience that stayed with me for a few days hasn’t happened for a long time.